Of the nitrogen (N) fed to dairy cows, only 21 to 38% actually is exported as milk or meat. That means 62 to 79% of the N fed to cows is for the most part excreted via urine and feces of cows. Most N voided in urine is quickly emitted as ammonia whereas the percent of fecal N converted to ammonia is quite variable depending upon storage management and land application method. Because most N consumed in excess of requirement is excreted in urine, to improve efficiency of N use, urinary N needs to be reduced. Changes in diet formulation can improve efficiency of N use on dairies.

Protein nutrition of dairy cows has evolved over the decades. Initially, the approach was to determine the % or amount of dietary CP that cows needed for milk production. However, any CP consumed in excess of the cows’ requirements is excreted via urine. Thus, by feeding the cow to meet, and not exceed, her CP requirement, N excretion is reduced. The major weakness of formulating diets on a CP basis is that it ignores the type of CP consumed. For example, under this system all N in NPN sources (urea for example) is treated the same as the N in soybean meal, and clearly they are much different. The N in NPN does not include long chains of amino acids in the form of “true” protein whereas most of the N in soybean is amino-acid bound. Therefore, soybean meal contributes amino acids to both the ruminal micro-organisms and to intestinal amino acid absorption whereas NPN contributes only to the latter (Figure 1).

Another approach to improve upon balancing diets on a CP basis was the Burrough’s metabolizable protein system (Burroughs et al., 1975). This system considered the amount of dietary N that was solubilized in the rumen and could be used for microbial protein synthesis, a calculation that also involved the amount of TDN available to support microbial growth. To the calculated microbial protein was added the amount of dietary protein that escaped ruminal degradation. Use of ammonia and fermentable carbohydrate for microbial protein synthesis is illustrated in Figure 1. Finally, adjustment factors for digestibility and unavoidable fecal losses were applied to yield a Metabolizable Protein value. This system required knowing the amount of protein in feeds that was converted to ammonia in the rumen, the amount of feed protein that escaped ruminal breakdown, and the TDN value for the feeds. The concept was excellent but the system needed refinement.

The amount of dietary protein that is degraded in the rumen is primarily determined by characteristics of the N-containing compound (e.g., solubility and linkages) and how long it resides in the rumen (Figure 1). Residence time in the rumen, i.e. ruminal passage rate, is determined by total feed intake (the more the cow eats the faster the feed tends to move through the rumen), particle size and specific gravity (smaller, heavier particles move faster than large, light particles through the rumen), and other factors such as how quickly the microbes ferment the feed. Certain feeds are fermented faster than others (barley is fermented faster than sorghum), and feeds can be treated to reduce their rate of protein breakdown (most treatments involve lowering the protein solubility). Obviously the calculations to determine the amount of dietary protein that is degraded, or conversely undegraded, in the rumen get complicated, hence computer models tremendously speed the calculations.

Current approaches to meeting the amino acid needs of cows

Secondly, diets are formulated to supply amino acids for milk production by including dietary proteins that will not be completely degraded in the rumen and have a high content of the amino acids believed to be most limiting for milk production. Some feed proteins have relatively high LYS concentrations (porcine blood meal), some have relatively high MET concentrations (corn gluten meal), and some have a good balance of LYS and MET (fish meal). Thus, diets contain multiple proteins, all of which degrade at different rates in the rumen. In addition, the ruminal degradation rates for the 20 amino acids found in proteins vary substantially. Fortunately, all these data are contained in software programs so the estimated flow of feed amino acids into the small intestine is quickly calculated. Use of computer models allows us to take advantage of complementary protein and other N sources to achieve lower CP diets to achieve comparable milk yields.

Using RDP/RUP feed data to achieve diets with a lower % CP.
Reynal and Broderick (2005) fed four diets that varied in RDP. Their diet description and results are given in Table 1. Urinary N excretion decreased about 60 g/cow/day as the % CP and % RDP decreased in the diet, however, the % milk protein also decreased. Their data suggest 11.7% RDP in ration DM as the best compromise between profitability and environmental quality.

Example 1. VonKeyserlingk et al. (1999) formulated two diets for cows that were primarily in early lactation. The control diet was formulated according to the 1989 NRC recommendations. A second diet was formulated with the CNCPS system and included a commercial protein source and intestinally available MET source. Using a commercial protein source and “rumen by-pass” MET allowed the CP level in the grain mix to be reduced by 2.9% units and total TMR by 1% unit (Table 2).

No difference was observed in DM intake or milk production between cows fed the diets formulated by the two methods (Table 3). The authors concluded that the CNCPS afforded the opportunity balance rations for reduced CP level without loss in milk production.

Example 2. Harrison et al. (2000) used the CPM (Cornell, Penn State, and Miner Institute) model to formulate two diets containing undegraded protein sources in the form of canola derivative or animal-marine blend. Each of these diets was estimated to be slightly deficient in LYS and MET. Two additional diets were formulated that were supplemented with a MET source and free LYS-HCl to improve the dietary supply of MET and LYS. The postpartum levels of MET and LYS in the non-supplemented diets were targeted to be at ~ 100% of the requirements (1.9% MET/MP and 6.4% LYS/MP) and 116% of MET (2.2% MET/MP) and 106% of LYS (6.6% LYS/MP) for supplemented diets. When formulating the diets, it was considered that 20 g of the commercial MET source provided 7 g of ruminal escape MET (Koenig et al.,1998) and 40 g of free LYS-HCl provided 8 g of ruminal escape LYS (Velle et al., 1998). Cows were fed the experimental diets from ~28 days before calving through week 17 postpartum. At 9 weeks post-partum, cows received rBST per label.

The importance of formulating for desired ratios of MET to LYS.
In another study (Harrison et al., 2003), researchers employed the CPM formulation model to reduce dietary CP from 18% to 16% by replacing alfalfa silage with corn silage and undegraded protein sources (Tables 5 & 6). Diet #3 was predicted to have the best ratio and supply of MET and LYS, and resulted in the highest milk yield, and ratio of milk true protein to diet protein (Table 7). The reduced milk yield of cows fed diet #2 emphasizes the need to ensure the ratio of LYS to MET is ~ 3.2 to 1. Total N import (as feed N) onto the dairy was reduced by nearly 9% and IOFC was increased 6.5% by diet #3.

Impact of reduced dietary % CP on N excretion on a commercial dairy. A field study (Harrison et al., 2002) was conducted with a high producing herd to compare the general herd diet formulated at ~18% CP to a diet that was reformulated at ~17% (Table 8). Milk production was maintained while N imports to the farm (Tables 9 & 10) were decreased. In addition, the reformulated diet increased IOFC (Table 11). These results agree with those of Wattiaux and Karg (2004) who reported a 16% drop in urinary N when a diet with 18% CP was reformulated to 16.5% CP.

Reducing CP intake of high-producing cows can be achieved by strategic use of undegraded protein sources and amino acids (LYS and MET) under a variety of diet conditions. Diet reformulations can reduce N excretions by ~10% without negatively affecting milk yield or IOFC. These successes require the use of ration balancing software that estimate the amino acid (MET and LYS especially) needs of the lactating cow. Use of undegraded protein sources that have dependable concentrations of amino acids is critical to achieve consistent production responses. 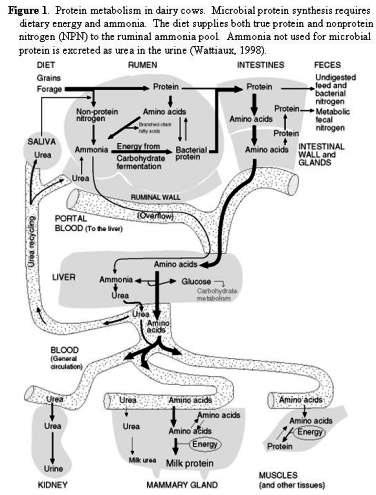 This fact sheet reflects the best available information on the topic as of the publication date. Date 6-20-2006