As soon as the dairy calf exits the uterus of the cow, the maternal nutrition and protection from disease by blood transfer of nutrients and immune cells directly to the fetus ceases. This nutrition and immunity now shifts to absorption of nutrients and immune cells found within colostrum to further protect the newborn and get it off to a good start. It has been well documented for years that consumption of colostrum, the first mammary gland secretion from the dam, is essential for low calf morbidity and mortality. It’s that simple, but not exactly. This process, called S I P, involves the:

Supply of colostrum,
Immunoglobulin (Ig) concentration, and
Pathogens of low presence in colostrum

Many farms struggle today with having an adequate supply of high-quality colostrum for feeding calves; thus, most farms will have some frozen as a back-up plan. It has been perplexing for years as to what factors affect the yield of colostrum. In a recent study conducted with Holstein cows at the University of Bern in Switzerland, first-lactation cows produced about 10 lb of colostrum (range = 4 to 24 lb), and cows with two or more lactations averaged 43 lb (3 to 46 lb). Although the average yield would provide a sufficient supply, some cows within the study yielded very low amounts of colostrum. Cows obviously calve at different times of the day, which results in different time intervals to milking time, but in this study, time from calving to milking did not affect colostrum yield. In addition, the colostrum yield was poorly correlated to milk yield for the entire lactation.

Risk factors suggested for potentially reducing colostrum yield have included a shortened dry period, low protein and energy intakes during the dry period, and heat stress, but limited scientific evidence is available to directly identify the major risk factors for reducing colostrum yield. Among several studies, nutrition of the dry cow has generally resulted in minimal effects on colostrum yield. In a recent study conducted at Ohio State University (unpublished), dry cows were overstocked at the feedbunk (0.88 headlocks per cow) or understocked (1.17 headlocks per cow) in the far-off period or close-up period. Holstein cows that were overstocked during the far-off period tended to produce less colostrum than cows understocked for the entire dry period (12.6 versus 19.3 lb, respectively). However, given that the risk for an inadequate supply of colostrum from every cow exists on every dairy farm, frozen, high-quality colostrum should be available or a stocked supply of colostrum replacer be on hand, preferably formulated with bovine immunoglobulins (Ig). 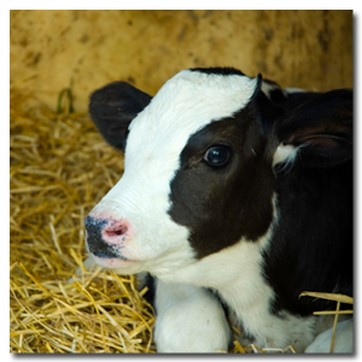 For years, research has focused on the quality of colostrum (i.e., concentration of immunoglobulins) as the primary factor affecting the level of immunity in the calf because it was assumed that you always feed the same amount of colostrum, generally about 4 quarts or 4 liters within the first 6 hours of birth. The sooner colostrum is fed, the more Ig are absorbed because gut closure increases with age and exposure to bacteria; however, timing of feeding colostrum varies. Some of this variation in timing relates to when the cow calves, how frequent the calving pen is checked, when she gets milked (with herd or bucket milker), and the actual lag that occurs from the time the colostrum is harvested until the calf is fed.

In addition, we used to check the quality of colostrum by primarily using a colostrometer, but today we encourage the use of a Brix refractometer (greater than a 22 percent reading on a Brix refractometer recommended, which is equivalent to greater than 50 g/L of IgG). A colostrometer is easy to break and then you have a mercury issue, and temperature of the milk can affect the readings (room temperature preferred, 72°F). A Brix refractometer also can be used to check the serum protein, an indicator of passive transfer of immunity from the colostrum (greater than 5 g/100 ml of serum protein or 10 g/L of serum IgG is suggested, which is equivalent to a greater than 8 percent Brix reading).

The amount of Ig consumed is more important than the actual concentration of Ig in the colostrum. Intake of IgG is of primary importance, but there are other Ig and potential immune stimulators in colostrum. In a recent study at Virginia Tech University, it was observed that maternal immune cells in colostrum were important in enhancing neonatal immunity during the first month of life. Of course, colostrum is rich in nutrients and other growth factors and hormones to enhance the neonate’s start in life and possibly production later in life.

High bacterial counts in colostrum enhance gut closure to absorption of Ig and increase the risk for failure of passive transfer and diarrhea. Colostrum at feeding time should contain less than 100,000 cfu of bacteria using the standard plate count. Some calf care specialists suggest that low bacteria count in the colostrum is as important, possibly even more important, than the Ig concentration in providing for adequate passive transfer of immunity. Keeping the bacteria count low begins with the equipment used for milking the dam and then continues into how the colostrum is stored if it is not fed immediately, and of course, the utensils used in feeding the colostrum to the calf. Colostrum should be fed immediately after it is harvested, or chilled for delayed feeding and then warmed to 100° to 105°F at feeding. If colostrum is not fed within about 48 hours after harvest, it should be frozen.

High-quality colostrum relative to Ig concentration can suddenly become poor quality because of dirty equipment used to harvest and feed the colostrum. Oftentimes, the equipment looks clean, but it may be a simple gasket or valve that is contaminating the entire supply of colostrum. So proper cleaning of equipment, including valves and other potential crevices, after each contact with milk is very important. Then the equipment must be kept dry and stored in a low-dust environment.

Colostrum can be pasteurized without denaturing the Ig, but the temperature should be held at 140°F for 60 minutes (versus 30 minutes at 145°F for whole milk) and then the colostrum should be cooled rapidly. Also, some manufacturers of pasteurizers have developed special bags for use in their equipment to provide for uniform heating and to ease storage of colostrum after pasteurization.

An adequate Supply of colostrum of high Ig concentration and with low Pathogen load is critical for the calf to get off to a good start. The management factors that specifically cause low yield and quality of colostrum are unclear. However, extreme variations in yield and quality of colostrum occur on dairy farms, and thus proper measurement of colostrum Ig concentration is essential. With this information, the amount of colostrum fed can be adjusted, an alternative source can be used, or a colostrum replacer can be used. Whichever is used to provide the Ig to the calf, a low bacteria count is essential for adequate absorption of the Ig to occur. Colostrum consumed by the calf is a nutrient- and Ig-dense food with a low bacterial count if harvested, handled, and fed properly.