Overstocking of freestall barns, defined as housing more cows within a pen than the available number of stalls and (or) providing less than the recommended 0.6 m (23 in.) of linear feeding space per cow (Grant and Albright, 2001), is a practice commonly employed by dairy producers to expand herd size without increasing the facility investment (Bewley et al., 2001). The short- and long-term effects of this practice on dairy cow behavior, productivity, and health are not fully understood. However, third-party auditing organizations such as Humane Farm Animal Care (www.certifiedhumane.org) currently require that member farms limit the number of cows within a pen to a number less than or equal to the number of freestalls. The current draft of the Dairy Well-Being Initiative (www.dairywellbeing.org), which represents the dairy industry’s consensus on animal welfare, contains language that would require adequate resting space to be available for all animals housed within a pen. The basis for these recommendations is the recognition that the health, productivity, and welfare of dairy cows rely on their ability to meet their behavioral needs each day.

The behavior of dairy cows depends on the interaction between the cows and their physical environment. In the “big picture,” the physical factors of the facility (stall design, flooring type, feed bunk design, environmental quality) impose baseline limitations on how the cows interact with the housing conditions. Within these limitations, the ability of cows to engage in natural behaviors is further dictated by management routines such as grouping strategy and stocking density. This paper will emphasize the effects of stocking density.

The natural behaviors that are most important to the health, welfare, and productivity of cows are resting, feeding, and rumination. Each of these is discussed in separate subsections below. In general, there has been a demonstrated need of 12 to 14 hours of resting time and 3 to 5 hours of feeding time per day (Table 1). These time budget requirements constitute 60% to 80% of a 24-hour period, which leaves a limited number of hours for milking and other management procedures.

A survey conducted on 47 farms in northeastern Spain demonstrated the significant effects of both stall availability and stall maintenance on the productivity of dairy cows (Bach et al., 2008). The mean stocking density of the study herds was 90% with a range of roughly 60% to 200%. There was a considerable amount of variation in productivity. Herds ranged from 20 to 34 kg/d (44 to 74 lb/d) of milk per cow, despite cows being fed the same ration that was mixed at a common location. Stall availability and stall maintenance explained approximately 40% of the observed differences in production. A positive relationship between stall availability indicated that each unit change in ratio of stalls-to-cows increased milk production by 7.5 kg (16.5 lb). However, there was no relationship between stall availability and milk production among the herds with stocking densities that did not exceed 100%, indicating that no benefit was gained by understocking. The results reported by Bach et al. (2008) are similar to those collected at the William H. Miner Agricultural Research Institute. Instead of evaluating production and stall availability, hours of rest and production were compared (Figure 1). Each hour increase in resting time resulted in a gain of 1.7 kg (3.7 lb) of milk production. Recent research (Fregonesi et al., 2007; Hill et al. 2007; Krawczel et al., 2008) has demonstrated the effect of stocking density, or stall availability, on resting time.

Much of the nondietary effects on productivity may be related to the behavioral effects of stocking density and the importance of each of these behaviors in maintaining health and well-being. In a broad sense, the effects of stocking density are driven by three key factors. First, the competition for resources limits the ability of cows to behave in a natural manner (Wechsler, 2007). The severity of the overstocking will dictate the extent that the natural feeding, resting, and rumination behaviors are inhibited. Each of those behaviors will be discussed in detail below.

In spite of the impact on behavior, there is a clear economic incentive for farmers to overcrowd free-stall facilities (Bewley et al., 2001), thereby spreading the fixed costs of production over a greater number of cows without expanding existing facilities. Additionally, the free-stall usage at stocking densities of 66% and 100% reported by Wagner-Storch et al. (2003) suggests that some overcrowding may be possible without affecting natural behavior. The extent that a barn can be overcrowded will depend on the social dynamic that exists within the herd as well as environmental factors. 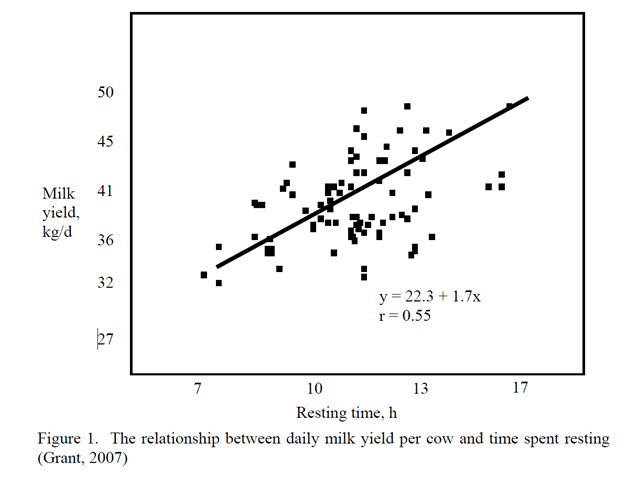 The lying behavior of cows subjected to either undercrowded (67% stocking density) or overcrowded (113%) conditions reported by Fregonesi and Leaver (2002) may explain why Bach et al. (2008) found no benefit to undercrowding. Average time per day spent lying (10 h), lying and ruminating (5 h), and occupying a stall (15 h) did not differ between the undercrowded and moderately overcrowded treatments. However, there were fewer aggressive interactions per hour in the undercrowded pen. These results suggest that there may not be a benefit to understocking cows beyond the dry and transition periods.

The reduction of lying time observed by Fregonesi et al. (2007) was similar to reduction in the percentage of stall usage in overcrowded cows when they were subjected to stocking densities of 100%, 113%, 131%, and 142% (Hill et al., 2007). The key differences between the work of Fregonesi et al. (2007) and Hill et al. (2007) were differences in group size (12 vs. 34) and overcrowding occurring at the stall only (Fregonesi et al., 2007) versus overcrowding at both the stall and the feed bunk (Hill et al., 2007). Some of the most dramatic effects of lying occurred between midnight and 4:00 a.m. Not only was this the time period that the greatest reduction in the percentage of cows lying occurred, but there was also a three-fold increase in the number of cows standing idly in the alley.

In general, the effects of overcrowding on lying are becoming the most well understood and predictable (Figure 2). An unpublished analysis of the relative response of lying in relation to stocking density observed in six different research trials by Grant (2008) demonstrated that the most pronounced effects occur above 120%. 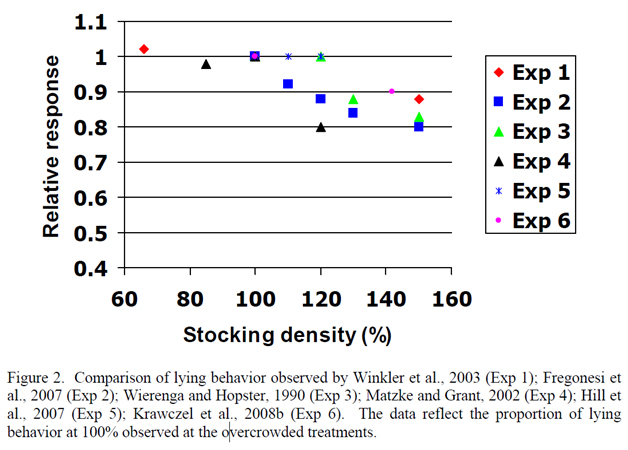 The reduction of resting time by overcrowding is the most likely explanation of the reduction in performance associated with stall availability. The priority for rest over feeding was evident in a recent research trial. Cows were housed in pens containing an isolation area and a resource area for various portions of the day (Munksgaard et al., 2005). Within the resource area, cows were able to rest, feed, or socialize. As time in the resource area decreased, the portion of time spent lying increased in an effort to maintain a consistent number of hours of rest. Research at the Miner Institute demonstrated that overstocking results in an increasing percentage of cows standing idly waiting for access to freestalls (Hill et al., 2007). This effect becomes more pronounced between midnight and 4:00 a.m., the time period when the motivation to feed was reduced and the motivation to lie down increased. There is a potential for cows to spend more time waiting for a stall to become available than engaging in feeding over the course of a day. Finally, depriving cows of lying for a relatively limited period (2 to 4 hours), which is similar to those reported in a trial evaluating stocking density, resulted in cows attempting to recoup the lost resting time for the next 40 hours (Cooper et al., 2007). Routine management practices, such as herd health checks or freestall maintenance, could be sufficient to deprive cows of lying for this duration.

Beyond the effects on production, several important health-related factors are detrimentally altered by reduced lying time.

Although it is a highly variable relationship, overcrowding at the freestalls tends to result in overcrowding at the feed bunk. This relationship is highly dependent on the barn design (4-row versus 6-row) and severity of the freestall overcrowding. The effects of spatial allowance at the feed bunk of lactating dairy cows have been examined for the past three decades (Friend et al., 1977; DeVries et al., 2004; Huzzey et al., 2006). The earliest research established that reducing feed bunk space per cow to less than 10.6 cm (4 in.) per cow reduced feeding time (Friend et al., 1977). More recent research suggested that the effects of decreased feeding space were evident at a much greater space allotment than suggested by Friend et al. (1977). The behavioral effects of providing either 51 cm (20 in.), slightly less than the 60 cm (23 in.) commonly recommended, or 102 cm (40 in.) of bunk space per cow were examined by DeVries et al. (2004). Increasing the space allotment per cow to 102 cm (40 in.) reduced the number of aggressive interactions per cow and increased the percentage of cows feeding during the 90 minutes following the delivery of fresh total mixed ration. Similar results were found in a comparison of four stocking densities ranging from 75% to 300% (Huzzey et al., 2006). This study also evaluated the same stocking density in pens utilizing headlocks or a post-and-rail feed barrier. Feeding time decreased and aggression increased as stocking density increased. The effect became more pronounced with each increase in stocking density. Cows also spent more time standing idly waiting for access to feeding space. One potential coping strategy that was observed was the shift in feeding times, which may be problematic if the ration is sorted by the first cows to feed. The comparison of the two types of feed barriers found that the headlocks offered protection against displacements and reduced aggression at the feed bunk.

Unlike lying and feeding behavior, conflicting effects on rumination from increased stocking density have been reported. Batchelder (2000) reported a significantly greater percentage of cows ruminating during the day at 100% stocking density compared to 130% (37% vs. 28%) on an average basis over 24 hours. In addition to differences in the average, the peak percentage of cows ruminating at any point (55%) was roughly 1.5 times greater than the peak percentage observed at 130% (32%). These results were not supported by the observations of Fregonesi and Leaver (2002). In addition to not finding any differences between under- and overcrowded pens in the time spent ruminating while lying, no differences in total time ruminating (8 h) were observed. There are two possible explanations for the difference in the observed effect. First, the Batchelder work was not replicated, so the results should be viewed with some skepticism. Second, the overcrowding (118%) imposed by Fregonesi and Leaver (2002) may have been insufficient to affect rumination. This is consistent with the main effects of overcrowding on lying becoming evident in cows housed at stocking densities above 120%.

Unlike the associations between stall availability (Bach et al, 2008) or resting time (Grant, 2007) and productivity, a direct cause-and-effect relationship has not been found in designed research trials (Fregonesi and Leaver, 2002; Hill et al., 2007; and Krawczel et al., 2008b). Milk production has consistently been reported as unaffected. The duration of the experiment (1 or 2 weeks for Hill et al. [2007] and Krawczel et al. [2008b], respectively) or the number of animals used (Fregonesi and Leaver, 2002) may have contributed substantially to the inability of those experiments to detect changes in milk production. Milk quality, on the other hand, was affected by overcrowding (Hill et al., 2007). Milk fat (%) was reduced by approximately 0.2% at 142% compared to 100%. Somatic cell count (SCC) tended to increase above 113%. Supporting this increase in SCC was a numerical increase in the number of incidents of clinical mastitis per 305 cow-days at risk for cows housed at 142% compared to 100% (Krawczel et al., unpublished data, 2008). Although the number of clinical events was not statistically different, the 2.5-fold increase was an indication of the need for further research into the relationship between mastitis and stocking density.

Three conclusions were drawn from these data:

Management factors, such as feeding and milking times, will determine the best time for individual farms to assess cow comfort. At the Miner Institute, feeding begins at 4:30 a.m. and milking at 4:00 a.m., 12:00 p.m., and 8:00 p.m. By midnight, feed has been available for approximately 20 hours, and most cows have had the opportunity to consume a post-milking meal. As a result, this marks the beginning of the period when cows are most motivated to lie down.

Summary of Responses to Stocking Density

Those that need further investigation are: