Depressed reproductive function during heat stress is one of the most difficult problems to solve on the dairy. Cows exposed to heat stress suffer from two problems that together make it very difficult to breed back cows quickly after calving. First, expression of estrus is reduced. In one study in Florida, 75% to 80% of the expected heats in the summer were not detected (Thatcher and Collier, 1986). Second, the proportion of cows inseminated that conceive and maintain pregnancy to term is reduced in summer (see Table 1).

Taken together, the herd pregnancy rate (the proportion of cows eligible to become pregnant in a 21-day period that actually become pregnant) takes a big hit in the summer.

Fortunately, strategies can be adopted to reduce the impact of heat stress on fertility. Some of these, like cooling cows during the summer, also increase milk yield, whereas others, like timed artificial insemination (AI) and embryo transfer, bypass the changes in the cow’s physiology during heat stress that cause infertility.

Modification of housing or pastures to cool cows during heat stress is an important practice for boosting reproductive performance and milk yield. However, provision of cow cooling has a bigger positive impact on milk yield than it does on fertility and does not eliminate summer infertility.

Data in Table 1 demonstrate the advantages and limitations of cooling cows for improving fertility. A total of 22 herds from Israel were categorized based on milk yield in the previous year’s winter and the intensity of cooling. Herds with intensive cooling were managed so that cows were exposed to 10 cooling sessions per day. In each session, cows were extensively wetted and then exposed to forced ventilation. Cows in the moderate cooling herds were cooled by wetting and forced ventilation only while in the holding pen before each milking (3x). As can be seen by examination of the table, herds where cows were cooled intensively had higher fertility in the summer than herds in which intensive cooling was not practiced. Nonetheless, fertility declined during the summer in all herd types.

It is important to assess how well cooling systems are working. This is particularly true for reproduction. Heat stress can compromise fertility by affecting the follicle or oocyte for at least 26 days before insemination and through the first two to three days of embryonic life. An increase in body temperature in that wide window of time can potentially compromise pregnancy success. Moreover, many of the effects of heat stress on fertility are caused by the high body temperatures that heat-stressed cows experience. Cows that experience high body temperatures for much of the day are not likely to get pregnant.

One way to assess effectiveness of cooling systems is to calculate the summer:winter ratio as shown in Table 1. Another is to actually measure the body temperature of cows. A general rule for eliminating heat stress is to ensure that rectal temperatures remain below 102.2°F since cows with body temperatures higher than that value experience reduced fertility and milk yield.

Rectal temperature should be measured in the afternoon (3:00 to 5:00 p.m.) when cows are most likely to be experiencing elevated body temperature. The thermometer should be placed in the rectum for a full minute to give the thermometer time to stabilize. While waiting for temperature measurements to stabilize, it is easy to also measure respiration rate by counting the number of flank movements for 30 seconds and multiplying by 2. A respiration rate of 60 breaths per minute or more indicates that a cow is experiencing heat stress.

A more comprehensive assessment of body temperature throughout the day can be obtained by the use of small computerized dataloggers attached to a blank CIDR device (see Figure 1). These can be placed in the vagina for up to a week and vaginal temperatures recorded at intervals as short as 1 minute. Examining the daily pattern in vaginal temperature can provide clues as to when additional cooling is needed. Keep in mind that vaginal temperature is about 0.2 to 0.4°F higher than rectal temperature. 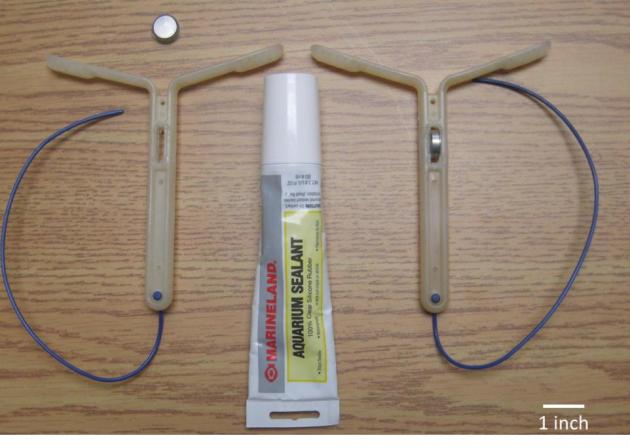 Figure 1. Example of a computerized datalogger for measuring vaginal temperature. The example shown is a Thermocron® iButton (Maxim, Sunnyvale, CA) that costs about $25 each. Note that a groove has been cut into the center of the CIDR. The iButton is placed sideways into the groove and fixed into place with silicone sealant. After removal from the cow, data can be downloaded and the iButton reused.

Development of timed AI protocols such as the OvSynch procedure make it possible to avoid the need for estrus detection and to inseminate cows at a fixed time. Use of OvSynch in heat-stressed cows has been shown to increase the rate at which cows get pregnant after calving. In a Florida study, the percentage of cows that were pregnant by 90 days postpartum was 16.6% for cows in which first insemination was through timed AI using OvSynch versus 9.8% for cows bred based on visual estrus detection only (Table 2). This improvement was not due to improved fertility but rather to improved submission rate. Note that the pregnancy rate per AI at first service was very low and similar between groups. However, cows were inseminated earlier postpartum in the timed AI group.

Timed artificial insemination protocols have been improved recently so they not only increase the number of cows submitted to AI but also increase conception rate. First-service pregnancy rates over 40% can be realized under the best timed AI protocols in well-managed herds. One protocol for timed artificial insemination that allows such high fertility is shown in Table 3. The protocol includes a resynchronization step for cows that were diagnosed open at Day 32 after insemination.

It has not yet been tested whether newer timed AI protocols will improve fertility as compared to Ovsynch during summer heat stress although one would expect a modest increase in pregnancy rate. Unfortunately, damage to the oocyte and embryo that occurs during heat stress cannot be rectified by timed AI protocols. Therefore, the major advantage of using timed AI during the summer is to increase submission rate rather than fertility.

A major reason why fertility is low in the summer is damage to the growing follicle, oocyte, and embryo caused by exposure to maternal hyperthermia. This damage cannot be reversed by timed AI or by the use of natural mating. Similarly, no hormone treatment has been found that can increase fertility during heat stress (see Hansen, 2008). Fortunately, effects of heat stress on the oocyte, follicle, and embryo can be bypassed by embryo transfer (ET). This is possible for two reasons. First, the embryo that is transferred into a recipient has, for one reason or another, escaped effects of heat stress. Second, by the time embryos reach the stage of development where they are ready to be transferred into a recipient (the morula or blastocyst stage, typically Day 7 after AI), the embryo has acquired resistance to heat stress. Thus, it is much less likely that maternal hyperthermia will kill an embryo after Day 7 of pregnancy than an embryo in the first day or two of life.

The effectiveness of ET for increasing fertility during the summer is shown in Figure 2. Shown are data from a commercial dairy in Brazil in which cows were either inseminated or received a fresh or frozen-thawed embryo produced by superovulation. Note that in the cool months (June to November), pregnancy rates were similar for AI and ET cows. In the warm months (December to May), however, pregnancy rates were higher for cows receiving an embryo. Moreover, the decline in fertility from winter to summer seen for inseminated cows did not occur for ET cows. 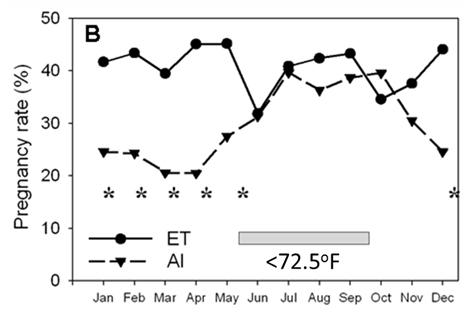 Figure 2. Seasonal variation in fertility in Brazil for cows that were either inseminated (AI) or received a fresh or frozen-thawed embryo produced by superovulation (ET). Data are from Rodriques et al. (2004), and the figure is modified from Hansen (2007). Months in which the average dry bulb temperature was less than 72.5°F (22.5°C) are highlighted with the gray bar. The asterisks represent months in which pregnancy rate was higher for embryo transfer.

It is possible to utilize hormonal protocols identical to those used for timed AI to perform timed embryo transfer and thereby also bypass the effects of heat stress on estrus detection. Nonetheless, embryo transfer can be an expensive proposition, and the economical benefits of ET depend upon keeping the cost of embryo production low.

The best way to minimize cost is to produce embryos using in vitro fertilization with oocytes recovered from the slaughterhouse. Embryos of high genetic merit can be produced by using elite bulls because one straw of semen can produce dozens of embryos. Use of sexed semen results in additional value to the in vitro-produced embryo.

Effectiveness of transfer of in vitro-produced embryos for improving fertility during heat stress is illustrated in data presented in Table 4. Note that cows receiving a fresh embryo had higher calving rates than cows that were artificially inseminated. Transfer of vitrified embryo resulted in suboptimal results, however. Vitrification is one of the processes used to cryopreserve embryos in liquid nitrogen. There was no significant difference in calving rates between cows receiving a vitrified embryo and cows bred by AI. In fact, in vitro-produced embryos do not survive freezing well with any of the current freezing processes. As a result, it is recommended that only fresh embryos be used for increasing fertility when in vitro-produced embryos are used. This recommendation creates a logistical problem because embryo production must be synchronized with preparation of the recipient.

a Stewart et al. (2011).
b Cows assigned to ET only received an embryo if a corpus luteum was present on Day 7 after ovulation (i.e., the day of transfer). Data are expressed as the percent of cows assigned to treatment that had a calf (all cows) and as the percent of cows that had a corpus luteum on Day 7 after ovulation (synch cows).
c Embryos were produced by sexed semen. The percent of calves that were heifers was 50% for AI, 80% for cows receiving vitrified embryos, and 88% for cows receiving fresh embryos.
* Different from AI, P<0.05.

Another limitation of embryo transfer is that the supply of embryos is currently low. In the Southeast, at the time of this writing, one company produces and transfers embryos using slaughterhouse oocytes and in vitro fertilization. Ovatech LLC based in Gainesville, Florida (www.ovatech.net) produces embryos with conventional semen for $35 each and with sexed semen for $60 each (including costs of transfer).

One of the consequences of heat stress is that cells produce more oxygen free radicals that can damage cells. Accordingly, various experiments have been performed to evaluate whether administration of antioxidants can improve fertility in the summer. In general, provision of antioxidants has not been effective. However, feeding supplemental β-carotene for at least 90 days beginning at ~15 days after calving in the summer and fall increased the proportion of cows that were pregnant at 120 days postpartum (35% versus 21%) (Aréchiga et al., 1998). Work is currently under way at the University of Florida to further evaluate the feasibility of providing antioxidants to counteract the impact of increased production of free radicals in the summer.

The author’s research reported here was supported in part by the funds from the Southeast Milk Inc. Milk Checkoff Program and Agriculture and Food Research Initiative Competitive Grant No. 2010-85122-20623 from the USDA National Institute of Food and Agriculture.

Hansen, P.J. 2008. Getting cows pregnant when it’s hot – a growing problem with some novel solutions. Partners in Reproduction 4, No. 2. http://www.animal.ufl.edu/hansen/MSS/partners%20in%20reproduction%20newsletter_4.pdf.