Forage sorghum is a warm-season annual that is used for silage production and fed to dairy cattle in many regions of the United States. Compared with corn plants, it uses water more efficiently and is more heat- and drought-tolerant, which is important in areas where irrigation is limited or there is a greater chance of drought. In the semitropical regions, two crops of forage sorghum may be produced, or it can serve as a second crop following corn for silage. The feeding value of forage sorghum is influenced greatly by variety planted and stage of maturity at harvest. While forage sorghum silage is not a complete replacement for corn silage, it can be successfully used in rations fed to growing or lactating dairy cattle.

Compared with corn, the cost of production for forage sorghum silage is lower, primarily because of lower seed and irrigation costs. Water requirements are reported to be 30% to 50% lower than for corn, which is an important consideration in areas that are dependent on irrigation to produce a crop. Forage sorghum will tolerate lower soil fertility than corn and still produce reasonable yields, but forage sorghum also responds well to fertilization. Forage sorghum can be planted later in the growing season than corn and still produce similar yields. Yield will typically be lower than corn silage, depending on soil fertility and water availability.

Figure 1 illustrates the variation in yield and NDF digestibility of 34 varieties of forage sorghum evaluated in the Texas Panhandle between 2008 and 2011. In vitro NDF digestibility (48 hour) of the BMR varieties averaged 64.8% compared with 56.1% for non-BMR varieties. Average yield (35% DM) was 22.8 and 20.5 ton/acre for non-BMR and BMR varieties, respectively, in this trial. Lodging scores ranged from 0% to 46% among varieties evaluated and should be considered when selecting a variety for planting. Given the variation in yield and quality among varieties, it is important that producers select varieties based on variety test data within their region. 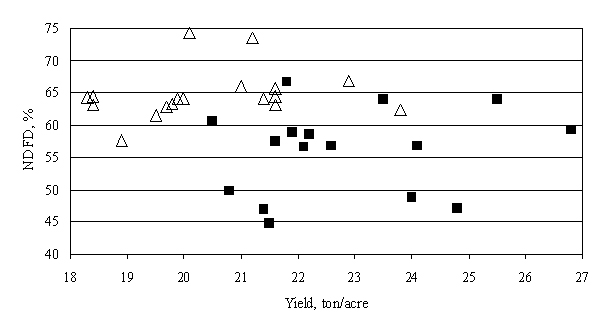 Figure 1. Relationship of yield and NDF digestibility (NDFD) of forage sorghum varieties with (∆) or without (■) the BMR gene.

Nitrate toxicity is not as common in forage sorghum as in other forages in the sorghum family, but it can occur during a drought if large amounts of nitrogen fertilizer have been applied. Allowing the plant time to transform nitrogen to ammonia or protein after a rain will reduce the risk of nitrate toxicity. If there are concerns about the potential for nitrate toxicity, a sample should be taken and submitted for analysis. Ensiling will reduce moderate nitrate concentrations to a safe level in most, but not all, cases.

The recommended stage of maturity for harvesting forage sorghum is when the grain reaches the early to late dough stage to optimize DM content and nutrient quality. Harvesting earlier during the late vegetative or early head stage of maturity will result in silage with very low DM content (<25% DM), which will result in excess seepage and an undesirable fermentation including higher concentrations of acetic acid and ethanol. If harvesting is going to occur at this stage, wilting is recommended. If harvesting at the hard dough stage of maturity, the forage will have higher DM content, but the grain will be more mature and less digestible. Kernel processing forage sorghum that is in the late dough or hard-grain stages of maturity will improve grain digestibility and support improved animal performance.

In general, forage sorghum has higher concentrations of protein, fiber, lignin, and ash but lower concentrations of starch compared with corn silage (Table 1). The variation in the chemical values, as measured by the standard deviation, reflect differences in sampling, varieties planted, stage of maturity at harvest, fermentation, storage, and other factors that affect forage quality. Average 30-hour NDF digestibility was 60.7% for forage sorghum silage compared with 57.6% for corn silage.

If diets are reformulated to account for differences in the higher NDF and lower energy content, milk yield and composition are not negatively impacted when BMR forage sorghum is substituted for corn silage and in some cases has been improved. This reflects the higher NDF digestibility and available energy of the BMR forage sorghum silage. Milk yield will still be lower when typical forage sorghum silage is substituted for corn silage because of lower energy even when diets are adjusted for NDF content.

In the southern regions of the country, it is possible to harvest two crops of forage sorghum from one planting in the spring or if forage sorghum is planted behind the first corn silage crop. Normally the first crop is planted in March or April and harvested in June or July. In systems where the forage sorghum is allowed to regrow or ratoon, it is fertilized and harvested in October or November. To reduce lodging and improve forage quality, brachytic dwarf varieties with the BMR gene are used for silage production. In a recent trial, silage produced under this management system using a brachytic dwarf-BMR variety was compared with silage produced from two corn crops produced during the same period. Diets were balanced to account for differences in NDF content and fed to mid-lactation cows. Intake, milk yield, and composition were similar for cows fed forage sorghum or corn silage from either harvest.

Typical forage sorghum silage is commonly used in diets fed to growing heifers and dry cows that have lower energy requirements compared with lactating cows. Varieties should be selected to produce the desired forage quantity and quality needed to blend with other forages and ingredients used in these rations. The use of a BMR variety may not be as important in diets for older replacement heifers and dry cows as for lactating cows.

Forage sorghum can be used in diets fed to lactating dairy cows to support similar milk yield and composition as that achieved for diets based on corn silage. It is important to harvest the forage at the proper stage of maturity to optimize nutrient quality and use varieties that have improved fiber digestibility for lactating cows. Given the potential variation in nutrient content of forage sorghum, samples should be submitted for chemical analysis and that information used to formulate rations rather than using book values.