Commercially affordable sexed semen (since 2006) and genomic testing (since 2009) have added to the options that dairy farmers should consider when looking to increase profitability. These technologies, combined with good overall management, and older technologies such as embryo transfer or beef semen, lead to an expanded number of choices regarding genetic selection, breeding and culling. Among the options to consider are:

How to Evaluate Breeding Schemes

At the University of Florida, we put together a herd budget model to evaluate combinations of genomic usages, semen type, and culling rates given herd specific data and prices. The bottom line is to focus on profit per milking cow per year. In this model, dairy calves kept as replacements were valued based on their genetic merit. This genetic merit depends on the genetic merit of the dams and sires of the calves and on the sale value of the surplus heifer calves. A greater surplus of dairy calves can be created with sexed semen, but this is at a higher cost than using conventional semen and at lower conception rates. Sexed, conventional, and beef semen can be applied to different groups of cattle. Results of some user-defined and optimal breeding schemes are shown in this article.

The cost of genomic testing was set at $50 per tested calf, which included the extra labor cost for obtaining and sending the sample. All born alive dairy calves were tested if genomic testing was applied. Culled cows were sold at approximately half the cost of raising heifers. Dairy bull calves and surplus dairy heifer calves were sold a one month after birth at a profit of $150 after their expenses. The initial premium for a crossbred calf was $75 over the price of a dairy bull calf. Many other inputs that affect the outcomes are not shown here but certainly affect the outcomes from the model. The cow cull rate was fixed at 35% and did not vary with breeding scheme.

The best breeding scheme generates the greatest profitability. This means finding the optimal combinations of semen type (sexed, conventional, or beef) per service number and per parity. The herd budget model can search for these best breeding schemes. A constraint is that at least enough dairy heifer calves must be born to replace culled cows. 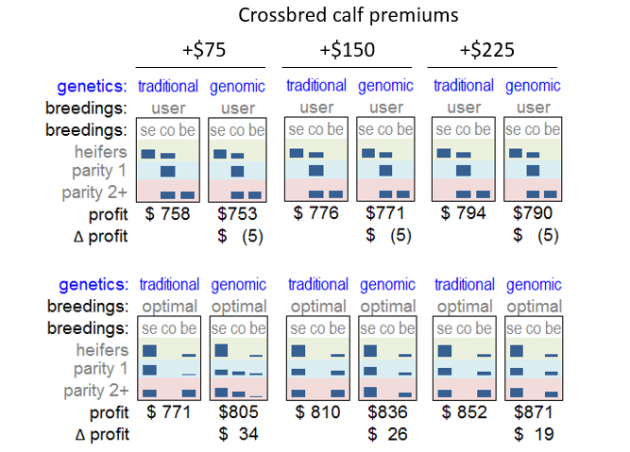 Figure 1. User-defined and optimal breeding schemes and profitability depending on the premiums paid for crossbred calves and the use of genomic testing or traditional genetic reliabilities. The top part has a user-defined breeding scheme where the top 60% of heifers were bred with sexed semen (se). The bottom 50% of second parity and older cows were bred with beef semen (be). All other breedings in heifers and cows were with conventional semen (co). In the bottom part, no conventional semen is used although this was an option. Profit is expressed as per milking cow per year.

Figure 1 shows results from an analysis where the premium for crossbred calves was set at +$75, +$150 and +$225 over the sale price of purebred dairy bull calves. The top part has a user-defined breeding scheme where the top 60% of heifers were bred with sexed semen (se). The bottom 50% of second parity and older cows were bred with beef semen (be). All other breedings in heifers and cows were with conventional semen (co). This scheme resulted in the occurrence of just enough dairy heifer calves to replace culled cows, but there was no surplus.

Profit per milking cow per year increased with a greater premium for crossbred calves as expected. Genomic testing resulted in a loss of $5 per milking cow per year for all three example premiums. Genomic testing results were used to identify the top 60% heifers to breed with sexed semen, and the bottom 50% of older cows to breed with beef semen, but not for calf selection.

The bottom part of Figure 1 shows results for more profitable breeding schemes. The schemes depended on the premium of crossbred calves and use of more sexed semen. Conventional semen was not used at all. The schemes also depended a little on whether genomic testing was used.. Profit per milking cow was increased by $13 to $81 compared to the user-defined scheme in the top part of Figure 1. The better breeding schemes were clearly more profitable than a reasonable user-defined breeding scheme. Genomic testing now added additional value compared to relying on traditional genetic reliabilities, but the value decreased with the size of the premium for the crossbred calves. 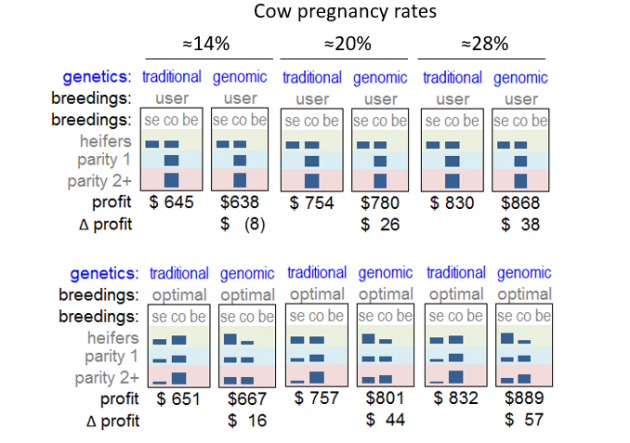 Figure 2. User-defined and optimal breeding schemes and profitability depending on pregnancy rates and the use of genomic testing or traditional genetic reliabilities. The top part has a user-defined breeding scheme where the top 50% of heifers were bred with sexed semen (se). All other breedings in heifers and cows were with conventional semen (co). Beef semen (be) was not allowed to be used. Profit is expressed per milking cow per year.

Figure 2 shows the effect of greater pregnancy rates (≈14%, ≈20%, and ≈28%) on the profitability and optimal breeding schemes. The set-up was the same as in Figure 1. The user-defined breeding scheme was set with 50% sexed semen in the top heifers and conventional semen in all other animals. The conception rate of sexed semen was assumed to be 80% of the conception rate of conventional semen. Therefore, the pregnancy rates were changed about a percentage point when more or less sexed semen was used.

The optimal breeding schemes were limited to the use of only sexed and conventional semen in Figure 2. Beef semen was not allowed to be used to help with a better comparison with the user-defined scheme. This means that even better breeding schemes are possible when all three breeding types are available at these varying levels of pregnancy rates.

Several pieces of the puzzle were not included in the results shown above. One value of genomic testing is the ability to correct parent misidentification errors. The value of correcting misidentification errors is generally too low by itself to warrant genomic testing, except perhaps to identify elite breeding stock. The analyses above also assumed a fixed annual cull rate of 35% to avoid the complicated effects of more or less voluntary culling. Genetic progress in sires is double today from what it was 5 years ago, meaning that heifers are genetically better than cows and incrementally more so than in the recent past. Few studies have investigated the direct effects of genetic improvement on optimal cull rates. Data from these studies allow us to conclude that the economic optimal cull rates continue to depend more on cow depreciation than on accelerated genetic improvement in heifers, but culling should be increased by a few percentage units with improvement in the genetic merit of heifer calves born on the farm.