Early detection and treatment of sick animals is important regardless of cause. Often there are multiple causes such as a combination of viral and bacterial infections along with various management and environmental stressors. Among a group of animals, individuals may be observed with varying severity and stage of disease. Diagnostic tests can be expensive, so care takers should be trained to consistently assess an animal’s health status. BRD scoring systems present a way to standardize diagnosis across a large number of animals.

The usefulness of a disease scoring system for dairy farms is limited by the logistics and practicalities of on-site implementation. A new on-farm bovine respiratory disease (BRD) scoring system has recently been created in an effort to provide an easy and accurate way to diagnose BRD in pre-weaned dairy calves (Love et al. 2014).

This simplified scoring system assesses six clinical signs.  When present, a specific number of points are assigned for each sign. A total score of 5 or higher classifies an individual as a BRD case.

One of the advantages of this system is that a rectal temperature is not needed for every calf; it is only needed if the total score for the visible signs is 4. A temperature could then tip the score over the cutoff of 5.

Please see Figure 1 for a detailed outline of the scoring. A printable version of the scoring system (in English and Spanish) can be found at: http://www.vmtrc.ucdavis.edu/laboratories/epilab/scoringsystem.pdf. 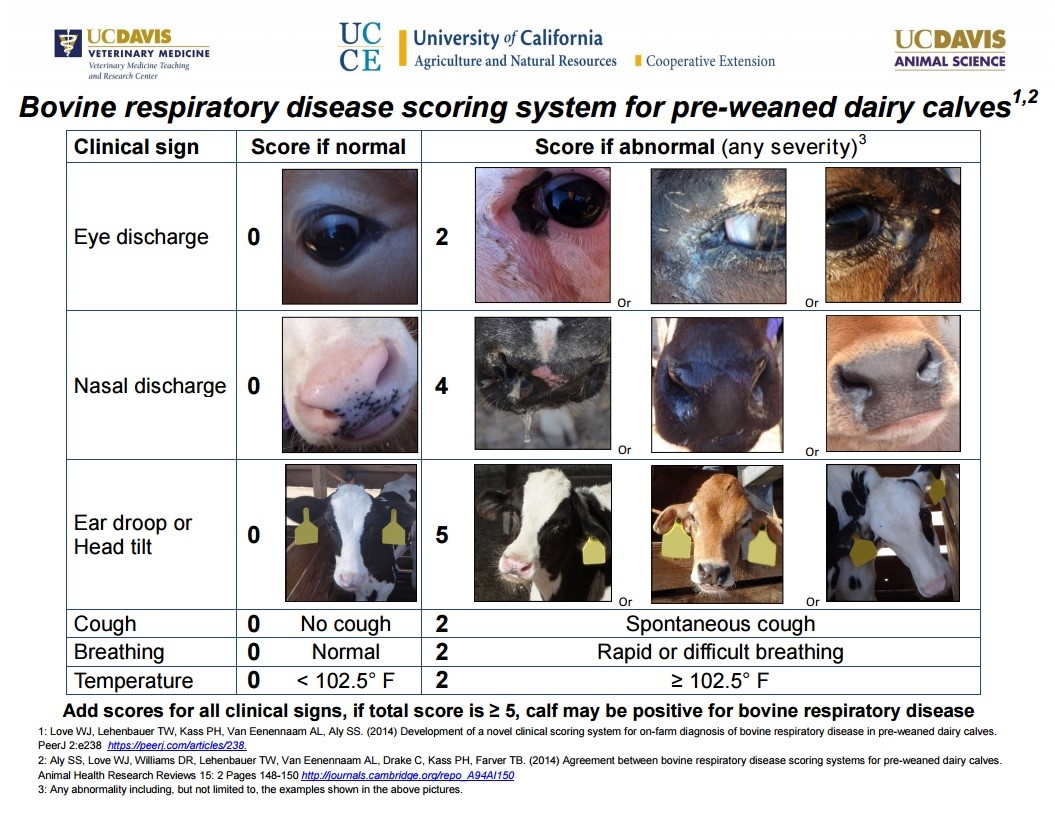 Validation of the simplified scoring system was performed by scoring 500 hutch-raised calves in parallel on both the new system and the Wisconsin system. The Wisconsin system uses five clinical signs scored by level of severity (http://www.vetmed.wisc.edu/dms/fapm/fapmtools/8calf/calf_respiratory_scoring_chart.pdf). In addition to scoring with both systems, the calves were evaluated for pneumonia using a stethoscope and ultrasound of the lungs. Sensitivity and specificity were determined for each system (Table 1) (Aly et al. 2014). Sensitivity is a measure of the proportion of true positives among all of the positive results (i.e., the number of actually diseased animals, as determined by clinical signs in combination with microbiological testing and abnormal lung sounds or abnormal ultrasound, which return a positive test result – the rest are false positives).  Specificity measures the opposite, the proportion of true negatives among all of the negative results (i.e., the number of healthy animals that return a negative test result – the rest are false negatives).

Table 1. Sensitivity and specificity of each scoring system performed on the same 500 calves.

specificity is statistically significant (P=0.041), but the implications of this are currently unknown.

Table 1 shows that both systems result in comparable sensitivity and specificity.

Further research on the diagnostic performance of BRD scoring systems in entire populations, as well as the development of a customizable risk assessment tool, are underway.

At the end of the day, the best scoring system for a particular farm is the one that will actually be used on a regular basis to determine which animals are sick. A simplified system that is easy to implement allows for the identification of sick animals more efficiently, thereby allowing them to be treated in a timelier manner. This has positive implications not only for the individual calf, but overall for animal welfare improvement.

To view a presentation about the simplified scoring system, please visit: https://www.youtube.com/watch?v=4r0CQOZ1s9Y.

To view a presentation about the Wisconsin system, please visit: https://www.youtube.com/watch?v=uGOCn2NcAOo.

Bach A. 2011. Associations between several aspects of heifer development and dairy cow survivability to second lactation. Journal of Dairy Science 94: 1052-1057.

The “Integrated Program for Reducing Bovine Respiratory Disease Complex (BRDC) in Beef and Dairy Cattle” Coordinated Agricultural Project is supported by Agriculture and Food Research Initiative Competitive Grant no. 2011-68004-30367 from the USDA National Institute of Food and Agriculture.