Mastitis: The Disease and How It Is Influenced by Dairy Technologies Such as Posilac

Mastitis is a complex, multi-factorial disease. A number of bacterial agents have been identified as causing mastitis in the dairy cow. Management and environmental factors including season1-3, parity3-6, and stage of lactation2,3 contribute to the infectivity, pathogenesis, and spread of the disease within the herd. Additionally, there is tremendous herd-to-herd variation in the incidence and prevalence of mastitis based on these management and environmental factors3 (Figure 1).

Any new production-enhancing technology for use in dairy cattle is accompanied with concerns as to how that technology might affect the incidence of various animal health conditions such as mastitis. rbST, Posilac, was introduced for commercial use in 1994. Numerous experimental and field studies have consistently shown that Posilac enhances milk yield in supplemented cows.7-15 Results from two7,10 of eight studies conducted prior to approval of Posilac showed an increase (P<0.05) in the incidence of clinical mastitis in cows supplemented with Posilac, while the other six studies8,11-15 showed no effect. A study16 utilizing another rbST analog (somidobove, Elanco Animal Health, Greenfield, IN) also showed no association between rbST supplementation and the incidence or duration of clinical mastitis, the prevalence of infection with common mastitis pathogens, or SCC. A subsequent evaluation17 was conducted on the data from 85 preapproval rbST studies from eight countries. This summary included data from 15 full-lactation studies and 70 short-term studies and showed that rbST-supplemented cows had a numerically higher incidence of clinical mastitis compared to non-supplemented controls; however, the clinical mastitis incidence was identical in supplemented and non-supplemented cows at the same production level. 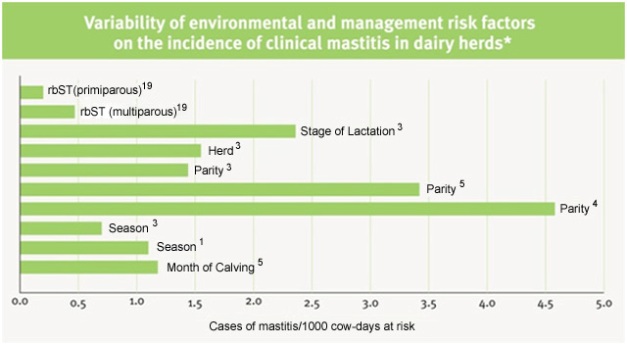 Another study20 designed to measure production responses to Posilac supplementation from northeast U.S. herds showed that log linear somatic cell scores and corresponding SCC were low for all herds, ranging from 3.08 to 3.22 (106,000 to 117,000 SC/mL) for the pre- and post-Posilac approval periods, and that SCC patterns were not affected by Posilac supplementation over the lactation. This study further showed that Posilac improved lactation yield and persistency over a four-year period and had no effect on culling20.

The label for Posilac states “Cows injected with Posilac are at an increased risk for mastitis (visibly abnormal milk) and may have higher milk somatic cell counts. Have comprehensive mastitis management practices in place on your dairy before using Posilac.”21 This cautionary statement was added based on observations from the original registration studies.7-14 Results from a number of field studies both prior to and subsequent to Posilac registration have given mixed results regarding its overall effect on the incidence of clinical mastitis and SCC.

Between 1970 and 2008 average annual milk production in the United States increased by over 10,000 pounds or approximately 280 pounds per cow per year.22 Genetic improvement accounted for 55% or approximately 150 pounds per year of that increase.23 Improvements in milk yield from genetic selection may be associated with increased susceptibility to clinical mastitis and SCC.24 Strandberg et al.25 demonstrated breeding programs without regard to mastitis control resulted in an annual increase in the incidence of clinical mastitis of 0.02 cases per cow per year. Using this relationship, a 2,000-lb increase in milk yield per year would equate to an additional 0.2 clinical mastitis cases per year. Cows supplemented with Posilac have an anticipated increase in milk yield of 10 lb per day or 2,000 lbs for a 200-day supplementation period.19 The additional 0.12 cases of clinical mastitis in Posilac-supplemented multiparous cows predicted by Collier et al.19 would equate to approximately one additional case per 10 lactations and would be approximately half that expected with a corresponding seven years of genetic and herd management related production improvements.

Supplement lactating dairy cows every 14 days beginning at 57 to 70 days in milk until the end of lactation. The label contains complete use information, including cautions and warnings. Always read, understand, and follow the label and use directions.