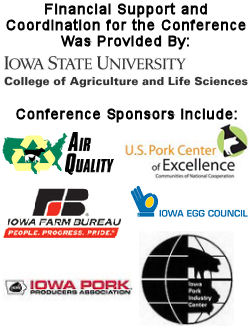 A recent study determined that a large majority (75 to 80 %) of the total NH3 and H2S emissions from a 2000-head tunnel-ventilated deep-pit pig-finishing barn for 45 days during August and September 2004 were emitted from the pit exhaust stream even though only 20 to 30 % of the total barn’s ventilation air was being provided by pit fans. This information allows producers with deep-pit facilities to strategically utilize catch and treat emission control technologies, such as biofilters, ONLY on pit fans airstreams that would result in large reductions (>50%) in the emissions of hazardous gases, odor, and particulate matter by treating only a small portion of the total ventilation air (figure 1). Another follow up study found that emissions of certain pollutants, may be reduced slightly (10 to 20%) by simply eliminating pit fans altogether for a deep-pitted pig building.

The phenomenal of a majority of the barn’s airborne pollutants being emitted by pit fans, may also be true for other swine production phases or for even other species (dairy and poultry) housed in deep pit facilities. This would mean that emission reductions of >50 % for certain pollutants are potentially possible when emission control technologies like biofilters are strategically placed on large emitting pit fan sources in deep-pit buildings. If only small reductions (<20%) of certain pollutants are needed, this maybe accomplished by the elimination of pit fans altogether.

There is no additional cost of this “technology” since a well-designed and operating ventilation system is required in any animal facility and especially in a deep-pitted pig building. There actually may be a cost saving if producers decided to install no or only a limited number of pit fans instead of the standard number for the livestock industry which is approximately 20% of the total barn’s ventilation system. A cost savings is often realized since the installation of pit fans is typically more expensive than wall fans plus pit fans have higher maintenance requirements and are more frequently in need of replacement.