Ample bedding in stalls can optimize cow comfort, reduce hock lesions and lameness, and increase cow longevity (Tucker and Weary, 2004). The great price increase seen in other more traditional bedding sources has resulted in recycled manure solids (RMS) becoming increasingly common on dairy farms. Recycled manure solids are obtained by mechanical separation of manure removed from dairy cows’ housing systems. Their low cost of recovery, together with high on-site availability, has allowed for their use as an alternative bedding source. However, RMS can favor the growth of environmental bacteria (i.e., Klebsiella) compared to other materials commonly used as bedding (new or recycled sand and wood shavings; Godden et al., 2008). This article examines several recent experiments using RMS as a source of bedding for dairy cows.

The composition and bacterial counts of RMS from 38 Midwest dairy farms are shown in Tables 1 and 2 (Husfeldt et al., 2012). Of these farms, 25 obtained RMS from manure processed in anaerobic digesters (dRMS), whereas the remaining 13 dairies separated RMS from fresh manure. Of the dairies working with fresh manure, four treated the RMS in a compost drum (cRMS) for 18 to 24 hours, whereas the other nine farms used them “fresh” (fRMS).

The compost drum uses a horizontal rotary drum to mix, aerate, and move the material. Air is supplied through the discharge end in the opposite direction of the material being moved by incorporating air as the mass tumbles. Composting proceeds rapidly, aided by the supply of oxygen to the decomposing material as it tumbles during the drum rotation. The average moisture content for both fRMS and dRMS was close to 72%, whereas that of cRMS was 60.3%. Although moisture dropped once RMS were distributed in the stalls, cRMS continued to have lower moisture content (41.3%) compared to both dRMS (55.9%) and fRMS (57.2%). The RMS with higher moisture content favored microbial growth, with the most frequent bacterial groups encountered being environmental Streptococcus and Bacillus species.

Bacterial counts were higher in unused fRMS compared to dRMS and cRMS, particularly Bacillus species, coliforms, and environmental streps. There were, however, no differences in staph counts among the different RMS types. Coliforms were not detected in unused cRMS.

An important finding of this experiment was that although the coliform bacteria were not found in cRMS before their use, they were recovered in similar amounts as those in dRMS and fRMS after their use. Similar findings were reported by the Cornell Waste Management Institute on Northeast Dairy Farms (Cornell University; Harrison et al., 2008).

From an analysis of six farms with different bedding materials, researchers reported that bacterial growth of Klebsiella and E. coli from used compost drum-treated RMS samples were free of these bacteria before their application. In addition, Klebsiella counts obtained in this bedding type after its use were higher than those obtained in bedding coming from fRMS or sand. The authors suggested that the bacterial concentration in unused bedding has little to no bearing on the bacterial growth after their use. This observation suggests that the bacteria in bedding from stalls originates in fresh manure deposited by the cows using the stalls and how those stalls are managed (cleaned) and not from the bedding material or its bacterial counts before its use. For example, the time cows spend lying down is reduced as bedding depth decreases. The opposite is also true, as filling the stalls up to the curb, with either organic or inorganic bedding, can increase lying times by two or more hours per day. Although plenty of bedding in the stall increases cow comfort, if deep, comfortable bedding is replaced less often, it can maintain higher moisture levels longer. When this happens, there can be an association with higher incidence of mastitis due to environmental organisms.

An experiment was conducted by South Dakota Research University (SDSU) researchers (Hippen et al., 2007) to compare the effects of dolomitic limestone (DL) and RMS on dairy cow comfort and hygiene in a freestall system. Two pens with 100 cows each were assigned to the following treatments: RMS and DL, in a double “switch-back” design. Before the start of the experiment, RMS were applied in two of the pens, and DL was used in the other two pens. At the start of the experiment, the treatments were reversed: pens with RMS were bedded with DL and vice versa. Treatments were followed for a month at the end of which measurements were taken. After data collection, treatments were reversed and continued for another month when the final data were collected. Stalls were bedded with fresh material every two days.

Bedding type did not affect milk production, components, or somatic cell counts. Figure 1 shows the average bacterial counts (logarithm-adjusted) analyzed from fresh bedding samples at the beginning of each experimental period. Unused RMS had greater (P<.05) Streptococcus and coliform counts when compared to DL bedding. These differences remained in the materials for two days after their application to the stalls. Staphylococcus spp and Streptococcus non-agalactiae counts diminished from the milk of cows housed in DL (P < 0.05, Figure 2).

Cow locomotion scores were not affected (P>.05) by bedding type. These results, however, were not consistent when compared with those published by Cornell University (Harrison et al., 2008). Those researchers evaluated the locomotion score (1 – 4 scale; 1 = normal and 4 = lame) on a farm, which used two bedding types, and found that the cows bedded with sand were lamer than those on fRMS (1.5 vs. 1.3, respectively). The lack of effect by bedding type on the locomotion score in the SDSU experiment may have been due to the short duration of the study (one month) compared to that of Cornell’s (one year).

There was a trend (P < 0.10) in cows on DL to be dirtier with more hock lesions than those bedded with RMS (Figure 3). There were no differences between bedding treatments on the different measurements of cow comfort. The cow comfort index (measured [(number of cows lying in stalls) / (number cows lying + number cows standing in a stall)]*100) was 81.9% and 79.6% for cows in DL and RMS, respectively. The stall use index ([(number cows lying in stalls) / (number cows out of the stall not eating)]*100) was very close to the 75 recommended by Overton et al. (2003). The stall standing index ([number of cows standing or perching in stalls / all cows in stalls]*100) values with 18.1 and 20.4 for DL and RMS, respectively, were within the range of 6 to 35% reported by Cook et al. (2005). The authors concluded that both bedding types were satisfactory, while RMS improved cow cleanliness and reduced hock lesions, whereas DL allowed for a better control of environmental bacteria. 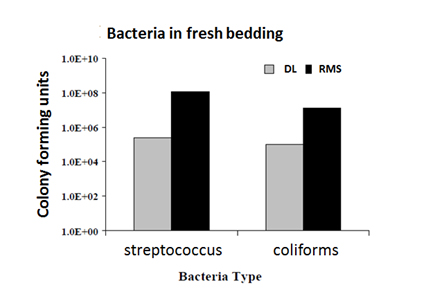 Figure 1. Colony-forming units (CFU; logarithm base 10) in DL or RMS bedding before their use. 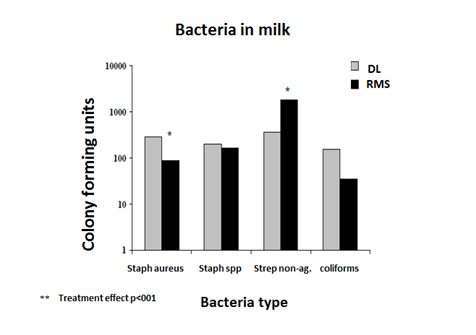 Figure 2. Colony-forming units (CFU (logarithm base 10) in milk of cows bedded with DL or RMS. 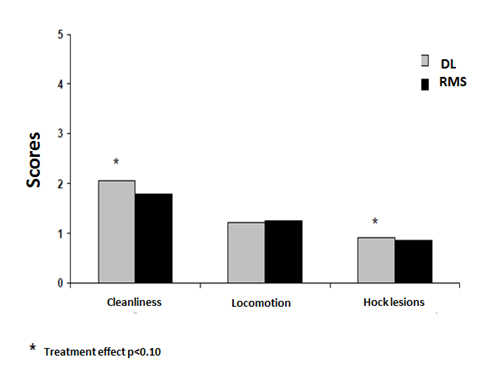 Figure 3. Cleanliness, locomotion, and hock lesion scores of cows in stalls bedded with DL or RMS.

Iowa State University researchers suggested the cost of a manure separation system with storage to be approximately $176,000 for a farm with 700 milking cows (Meyer et al., 2007). This system consists of a 254 mm diameter screw separator (FAN brand, $72,000), a solids distribution wagon ($18,000), and other components which may include a storage building, housing for the separator, pump, piping, and electricity ($86,000). This separator system produced approximately 1.2 tons of fresh RMS per hour having moisture content somewhere between 60% and 64%. In spite of the high purchase cost, the use of RMS as bedding resulted in reductions in the cost of milk production between 0.01 and 0.26 $ per cwt (Harrison et al., 2008).

From the survey of 38 dairies conducted by the University of Minnesota (Husfeldt et al., 2012) using RMS as the sole bedding source, the authors concluded that RMS were being used successfully as a bedding source for lactating dairy cows and that they offered cost and availability advantages when compared to other traditional organic bedding materials. In addition, somatic cell counts (SCC) on most of these farms were similar to the mean SCC of the region, with SCC values not being excessively high, especially when compared to some dairies that were not using RMS. In the final report, from the Cornell University project “Using Manure Solids as Bedding,” it was also suggested that when adequately handled, RMS can offer economic advantages without affecting herd health (Harrison et al., 2008).