Fertility is a key component of modern dairy production systems. However, a trend for declining dairy fertility has been evident in diverse production systems. Although fertility traits are strongly influenced by the environment, there is evidence for genotypic variation providing opportunity for selection. There are current efforts placed in collection of high numbers of accurate novel fertility phenotypes associated with the corresponding genotypes. Large scale evaluations are testing potential associations between direct measures of fertility and genomic variation on dairy cows under different management practices and environments. As the number of animals subject to genomic evaluations is consistently increasing, greater opportunities to detect effective markers for multiple fertility traits are developing.

The Context And The Expectations

A trend for suboptimal fertility levels in dairy cattle has been extensively described, with reported causalities for this tendency including anovulation, reduced fertilization, and compromised embryonic survival. Breeding programs selecting for milk production have been very successful and current trends indicate increments on milk yield per cow of 1 to 2% per year. Unfortunately, a number of studies have shown a negative genetic correlation between milk yield and functional traits, which may partially explain the current status for fertility and survival of dairy cattle.

Considering this concern, in recent years selection programs have modified their focus to include new traits centered on health, survival, and fertility. However, as heritabilities for fertility traits are lower than those for production variables, the magnitude of the impact of selecting for reproductive performance is still in question.

Adding complexity to this scenario, the influence of factors unconnected to fertility, such as breeding policy and voluntary waiting period, result in a constant difficulty for precise reproductive estimations. As an example, daughter fertility based on DPR is a function of days open calculated from a theoretical 60-d voluntary waiting period, which is highly sensitive to management variables such as the use of timed AI and inclusion of bull breeding.

Although the expected progress in fertility through genetic selection may be limited, the recent development of genomic technologies has opened the potential for new strategies aimed at multiple reproductive traits. Interestingly, recent research has been focused on intermediate physiological phenotypes that are associated with reproductive outcomes. One of these phenotypes is the interval from calving to first ovulation, which is a direct indicator of the ability of a cow to return to luteal activity after calving and can be measured through progesterone concentrations or by transrectal ultrasound. Although this information is not currently available, the logistics for assessing the return to ovarian cyclicity may be facilitated by the growing use of routine ultrasounding in farm reproductive visits and by the development of in-line technology capable of determining individual progesterone concentrations in milk.

From a different perspective, it is also interesting to consider some traits that may be indirectly affecting reproductive outcomes. A clear example is the abundant evidence indicating the considerable effects of health status on fertility.

In this article we discuss some of the findings of our NIFA funded project “Genomic Selection for Improved Fertility of Dairy Cows with Emphases on Cyclicity and Pregnancy” (Grant no. 2013-68004-20361 from the USDA NIFA). A relevant component of this 5 year project was the determination of fertility phenotypes in a multi-state Holstein population (approximately 12,000 from 7 States in the USA) that was enrolled at calving and monitored weekly until pregnancy confirmation. In addition, we monitored health by using standardized disease definitions at specific times of assessment. Here we present part of our results, illustrating how multiple events and cow-level variables are interconnected and are indirectly affecting pregnancy outcomes.

From a biological perspective, genetic variation affecting fertility may be directly involved in the physiology of reproductive processes. However, genetics may also determine, to some extent, the behavior of other related traits that have an impact on fertility. Among others, these comprise factors such as the ability to maintain an adequate body condition and feed intake during the transition period, the potential for adequate immune responses resulting in adequate health, and the ability to retain early pregnancy. Remarkably, this opens the potential for performing genetic selection on multiple traits that may indirectly benefit reproduction.

On the other hand, some intermediate physiological measures of fertility, such as resumption of ovarian cyclicity, have moderate heritabilities. What makes this point interesting is that cows resuming estrous cyclicity soon after calving are more likely to show estrus and to become pregnant in a timely manner. Therefore, decomposing reproductive phenotypes into their detailed components could result in an effective tool for selection. For example, calving interval could be decomposed into several reproductive components, such as the postpartum interval to commencement of estrus cyclicity, expression of estrus, conception, maintenance of pregnancy, and gestation length. Following are our findings associated with some of the aforementioned variables.

Early resumption of ovarian cyclicity (ROC) after calving has been associated with improved reproductive performance. Remarkably, it is reported that approximately 20 to 40% of Holstein cows remain anovulatory by 50 to 60 DIM.

We monitored reproductive variables in 11,733 Holstein cows calving on 16 farms located in multiple states. One of these variables was resumption of ovarian cyclicity that was assessed via transrectal ultrasonography at 40±3 and 54±3 d postpartum. In addition, cows subsequently submitted for AI were subject to pregnancy diagnosis by ultrasonography on d 32±3 d after AI and reconfirmed at d 60±3 of gestation to determine embryonic loss.

Our analyses indicated that early ROC was affected by multiple variables. Chances of ROC were higher for multiparous cows, female singletons, greater BCS at calving and at 40 DIM (>2.75), and absence of subclinical ketosis, lameness, and clinical endometritis.

Relevant to our topic, early ROC had positive effects on fertility and resulted in reduced days open (132 d vs. 150 d) and greater chances of pregnancy at first AI (almost 2 times) and at second AI (1.5 times). Early ROC was also associated with survival, resulting in lower odds of being sold after 55 DIM. Contrary to our expectations, the probability of pregnancy loss at first and second AI was not associated with early ovulation after calving.

Endocrine changes at calving and drastic metabolic adjustments to support milk synthesis result in negative energy balance and immune suppression. Consequently, a substantial proportion of cows are affected by disease around the time of calving and most health disorders occur in the first 30 DIM. Accordingly, in our study about 45% of the population was affected by at least one health disorder during early lactation.

Disease presence has been widely associated with reduced reproductive performance and increased risk of death and culling. We tested the cumulative effect of combinations of health events on fertility and survival of our Holstein study population. Heath disorders were grouped into reproductive (REP; dystocia, twins, retained fetal membranes, metritis, and clinical endometritis) and other (OTH; subclinical ketosis, mastitis, displaced abomasum, and pneumonia) and counts for each health event within 50 d postpartum were added into each of the 2 groups. Subsequently, the associations between multiple categories of disease occurrence (1, 2, 3 and ≥ 4 for REP and 1, 2 and ≥ 3 for OTH) and outcome variables, including ovarian cyclicity, pregnancy at first AI, pregnancy loss at first AI, and survival after 50 DIM were tested.

As anticipated, resumption of ovarian cyclicity was significantly affected by reproductive disorders (Figure 1). The probabilities of ROC were also reduced by the occurrence of other diseases not associated with reproduction. Pregnancy at first AI was also affected by REP and OTH. Pregnancy loss at first AI was increased partially by REP but it was not affected by OTH events occurring during early lactation. As expected, survival was reduced by both REP and OTH events. As presented in Figure 1, fertility and survival were significantly affected by the occurrence of REP and OTH during early lactation, and the magnitude of the effect consistently increased with the number of health events. 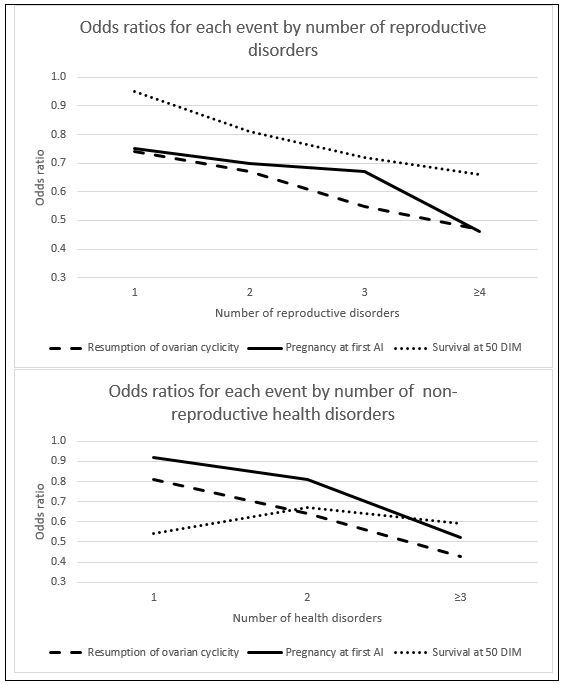 The occurrence of lameness affected multiple reproductive variables. Resumption of ovarian cyclicity was delayed in affected cows: the odds of ROC were reduced by 35% by lameness. Similarly, the odds of pregnancy at first and second AI in lame cows were reduced by 19% in both cases. The odds of pregnancy loss at first and second AI were not affected by lameness. In addition, lame cows had lower survival than normal cows; the odds of leaving the herd (death and live culling combined) before and after 50 DIM were 3.39 and 1.74, respectively.

The presence of purulent vaginal discharge (PVD) is a common finding around the first month of lactation. We assessed the occurrence of PVD at 28±3 DIM, as the presence of mucopurulent to fetid vaginal discharge. The overall incidence of PVD across our study farms was 25.7% (ranging from 11.8% to 35.1%). Average incidence was greater in cows calving in winter (27.5%) than in summer (23.6) and in pluriparous (27.2%) compared to primiparous (24.8%) cows.

Occurrence of purulent vaginal discharge had a significant detrimental effect on multiple fertility responses and survival later in lactation. This disorder affected resumption of ovarian cyclicity; the odds of ROC were reduced by 37% in affected cows compared with normal animals. In addition, the odds of pregnancy at first and second AI in PVD cows were 0.66 and 0.79 times the odds of pregnancy of healthy cows, respectively.

In addition to considering intermediate reproductive traits, reproductive indices can be developed, combining events that are relevant to fertility. We developed a reproductive index (RI) based on the information collected for each cow until a pregnancy was confirmed or until cows that remained open completed 305 DIM. The RI was expressed in values from 0 to 1 and represented a calculated predicted probability that a cow will become pregnant, as a function of the explanatory variables used in a mathematical (logistic) model.

The final model for the RI included farm and a complement of significant effects as explanatory variables influencing a pregnancy outcome: 1) incidence of retained placenta; 2) metritis; 3) clinical endometritis; 4) lameness at 35 DIM; 5) resumption of ovulation by 50 DIM; 6) season of calving; and 7) parity number. For instance, assuming that uterine disease, anovulation, and lameness negatively influence the probability of pregnancy, cows affected with those problems will have a low RI, although some will become pregnant.

Our next step was to evaluate how well the estimated probability value from our RI would agree with some relevant reproductive indicators originating from real data from our population. To simplify the analyses we divided our reproductive index into low (LRI) for the bottom quartile, high (HRI) for the top cows, and intermediate (MRI) for the cows in between these two extremes.

Finally, cows in the HRI category had 2.30 and 1.63 times greater odds of becoming pregnant at first and second AI than LRI cows, respectively. Similarly, cows in the LRI category had 1.61 and 2.16 times greater odds to lose their pregnancy after first and second AI than HRI cows, respectively. Interestingly, there was a consistent agreement between categories of the predicted RI and the measures of fertility collected from dairy cows, indicating that reproductive indices considering multiple variables are a viable method to refine the allocation of cows into potential low and high fertility populations. 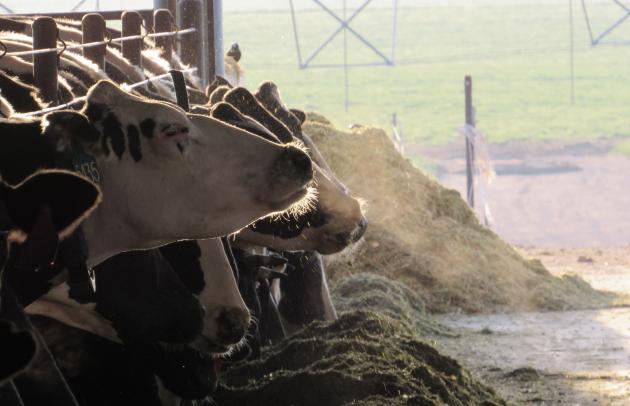 Figure 2: Adequate comfort and nutrition would result in improved health status with improved fertility as a bottom line.