Rapid growth of the ethanol industry in the United States has generated large quantities of dried distillers grains with solubles (DDGS) available as a feedstuff for livestock. Distillers grains are often added to cattle diets as a source of protein and energy. The protein supplied tends to be a good source of rumen-undegraded protein, whereas energy is provided by the highly fermentable fiber and fat. In addition, DDGS is a source of minerals. This needs to be considered when formulating diets for heifers to prevent excessive dietary mineral concentrations. As the ethanol industry continues to develop, new or altered by-products will appear on the marketplace for use in livestock diets. Nutritionally defining these products will be necessary to determine how they can be used in dairy heifer diets.

Distillers grains with solubles (DGS) are a by-product from ethanol production. Although other cereal grains, such as sorghum, wheat, or barley, can be used to produce ethanol, corn is the predominant grain used in the United States to produce ethanol. In the traditional dry grind process used for ethanol production, the entire corn kernel is used during the fermentation process (Bothast and Schlicher, 2005). The corn is cleaned and then hammer-milled to a medium coarse to fine grind meal. The resulting flour is combined with water to form a mash, and enzymes are added to split the starch in the kernel into glucose molecules. The resulting mash is then cooked and sterilized to kill undesirable bacteria. Once the mash is cooled, yeasts are added to the mash, and the glucose is converted to ethanol and carbon dioxide. Ethanol is then extracted in the distillation process, and remaining water and solids are collected and referred to as whole stillage. Whole stillage can be pressed but more commonly is centrifuged to separate the coarse solids from the liquid. The liquid is referred to as distillers solubles, also known as thin stillage. The thin stillage can be concentrated in an evaporator to become condensed distillers solubles (CDS), also referred to as syrup. The coarse solids collected from the centrifuge are known as wet distillers grains. Wet distillers grains (WDG) and CDS are combined to form wet distillers grains with solubles (WDGS) and can be dried to form DDGS. Modifications to the dry grind process are resulting in the development of new by-products that can be used in livestock diets.

Knowing accurate nutrient composition of DGS is critical when formulating diets for livestock. Laboratory testing of purchased DGS is highly recommended although not always practical for every shipment. This information may also be provided by the ethanol plant. Tables 1 and 2 show nutrient composition of DGS from various ethanol plants located mostly in the upper Midwest. The NRC values are book values published in the Nutrient Requirements of Dairy Cattle (1989, 2001). In addition, researchers at South Dakota State University (Holt and Pritchard, 2004), University of Minnesota (Harty et al., 1998; Spiehs et al., 2002), and University of Wisconsin (Kaiser, 2005) have analyzed DGS samples from numerous ethanol plants in Minnesota, Nebraska, South Dakota, and Wisconsin. Nutrient content of DGS is influenced by factors such as the type and quality of the grain, milling and fermentation processes, drying temperature, and amount of solubles added back to the wet DGS before drying.

Dried distillers grains with solubles: Dried distillers grains with solubles (DDGS) are obtained by combining the WDG with the CDS and then drying. Dried DGS have changed significantly since the 1980s (and before) when it was derived primarily from the whiskey industry. Since the mid-1990s, there has been tremendous growth in the fuel ethanol industry. The DDGS produced from these new plants are sometimes referred to as “new generation” DDGS. Nutrient composition of these new DDGS has improved over the old DDGS. For example, DDGS produced from modern dry grind ethanol plants typically contain more protein and energy than older book values (NRC, 1989). The newest dairy NRC (2001) lists crude protein (CP) at 29.7% for DDGS, a number close to reality (Table 1). Average CP for DDGS is around 30%, but these studies illustrate that CP ranging from 27 to 34% is not unusual. One concern for nutritionists is that the level of fat in DGS can vary greatly and can be higher than 12%, much higher than values reported in the NRC (2001). Distillers grains contain high levels of unsaturated oil, predominantly linoleic acid (C18:2), reflecting the composition of corn oil. Lastly, DGS provide significant concentrations of minerals, which can pose challenges to the nutrient management plan when fed above animal requirements. Most traditional DGS contain between 0.65 and 0.95% phosphorus. Therefore. the requirement for phosphorus of the animal when DGS are included in the diet is easily attained. The other mineral that can be highly variable is sulfur. High sulfur levels in feed and water can result in central nervous system disorders (known as polioencephalomalacia) which can lead to poor performance or death. Therefore, sulfur levels need to be monitored.

Wet distillers grains with solubles: Wet distillers grains with solubles (WDGS) are sold prior to drying. Traditional wet distillers grains contain 30 to 35% DM (Table 2) and are similar in nutrient composition to DDGS. As demonstrated in Table 2, the nutrient composition of WDGS can vary considerably as shown by the differences reported in the studies of Holt and Pritchard (2004) and Kaiser (2005). Wet DGS are often lower in price on a dry matter basis compared to DDGS, but the producer must determine that WDGS can be successfully used in his/her operation. There are benefits of using WDGS, particularly because of their high palatability and how they condition diets that are very dry. Total mixed rations that contain 10 to 20% WDG maintain greater homogeneity as dry particles stick together. From a practical standpoint, this results in less particle separation and less sorting by cattle. Methods to conserve and equipment to handle WDGS on the farm are among the challenges producers have to face.

Condensed distillers solubles: Condensed distillers solubles (CDS) are also sometimes referred to as “syrup.” They contain similar DM% to that of WDG (27 to 35%). Compared to distillers grains, CDS are higher in fat (and consequently energy), lower in fermentable carbohydrates (such as fiber), but much higher in minerals. Minerals such as phosphorus, potassium, and sulfur are greater in proportion in CDS compared to the solids portion of the grains. Thus, as more CDS are added back to the grains, fat and minerals increase, but CP decreases in the final DGS product. This syrup can be sold separately, but it appears that much of it is added back into the distillers grains forming the final DGS product.

Other ethanol by-products: Until recently, most DGS resulted from the traditional dry grind ethanol plant or from the wet milling industry. As new processes have been developed, new by-products from these ethanol plants have been developed. In one such example, corn is milled into several fractions that can be further directed into different processing streams (Gibson and Karges, 2006). This fractionation results in new end products such as high protein DDG (HP DDG), corn germ dehydrated, and bran. Furthermore, syrup can be added to the bran, resulting in a bran cake (Gibson and Karges, 2006). Examples of these feeds are shown in Table 3. These products are proprietary and therefore are specific to individual companies. As a result, the nutrient composition of bran or corn germ may vary significantly depending on the company of origin. Each of these fractions contains nutrients specific to the stream from which they originate. The bran is the seed coat of the corn kernel; therefore, it may contain more fiber but less protein. The germ is removed because it has low starch concentration but is rich in fat. The HP DDG results from fermenting the endosperm where most of the starch is located. In this particular product, the CDS is not added back to the grains, making it a true DDG (with no S) (Gibson and Karges, 2006). It is critical to obtain the nutrient composition of these by-products when formulating them into heifer diets.

An additional new product on the horizon is a low-fat or deoiled DDGS (Table 3), where fat is partially removed from the DDGS post-fermentation. Fat removed from the DDGS can be sold or further used in biodiesel production. Deoiled DDGS is lower in fat (2.5 to 3%) compared to traditional DDGS. This product will be proportionally higher in CP, fiber, and minerals due to the removal of fat from the traditional DDGS.

Use of New By-Products in Dairy Heifer Diets

One of the main concerns when feeding dairy heifers is to maintain an adequate daily gain. According to the NRC (2001), Holstein dairy heifers should not gain more than 1.9 lb/day to attain a recommended size at calving at 23 to 24 months of age. Adequate skeletal growth is needed in conjunction with target weight gain. If a heifer’s skeletal growth is stunted by nutrient deficiencies, but she gains weight at the target rate, she will ultimately become excessively conditioned. Overconditioned heifers have excessive fat deposits in the subcutaneous tissue, around vital organs, and in the mammary gland. This often increases calving difficulty and metabolic disorders and may decrease future milk production.

When feeding traditional ethanol by-products such as DDGS and WDGS, one of the challenges is to find complementary feeds that will dilute the high nutrient concentration present in them (e.g., fat, protein, and phosphorus). Fibrous residues such as corn stover, straw, and roughages with low concentration of total digestible nutrients are ideal feedstuffs to complement a diet that includes ethanol by-products. Research conducted at the South Dakota State University Dairy Training and Research Facility, as well as on-farm trials, has demonstrated this to be possible. Dried distillers grains and WDG have been included in heifer diets in concentrations of 20 to 30% of the diet dry matter with excellent results.

When using deoiled DDGS and corn stover (or other fibrous residue of similar nutrient profile) to balance heifer diets, the main nutrient limitations (by excess) are total CP and S. This will allow for a maximum inclusion of 25% of the diet DM and the need to bring in an additional source of energy into the ration, either by the inclusion of grain or replacing part of the corn stover with forage of higher digestibility.

In the case of HP DDG, again the main limitations are excesses of CP and S. The maximum inclusion rate for this co-product is only slightly above 20%, and again there is a need to increase energy density of the diet.

Corn germ does not offer constraints as far as S or CP for its inclusion in the diet. With this by-product, excess fat and phosphorous become issues similar to those in traditional DDGS, WDG, and MWDG. Maximum inclusion rates are in the 25% range with a need to bring in additional protein and energy sources, if low-quality roughages are to be used.

Of all the new generation co-products, bran is the one that can be included in dairy heifer diets at the highest concentrations without causing severe nutrient imbalances. Its main limitations are its relatively high fat and sulfur content. Nevertheless, in diets adequately balanced for all other nutrients, one should be able to include it up to 40% of the diet (DM basis). 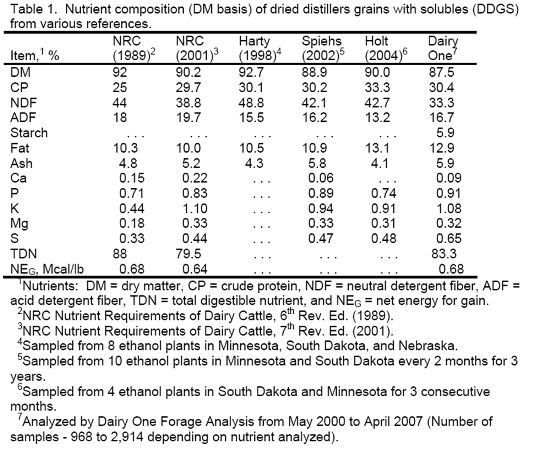 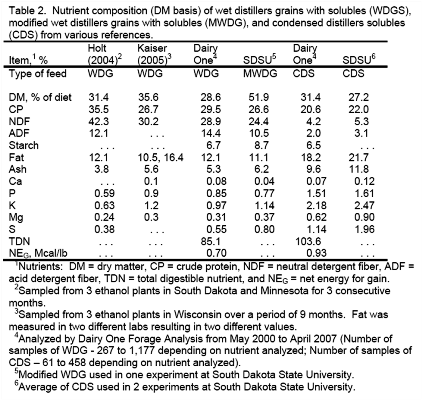 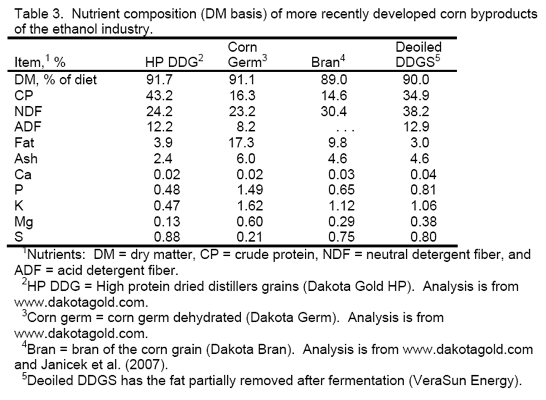