Although most cases of ketosis occur in fresh dairy cows, feeding practices and cow health prepartum can predispose cows to experiencing ketosis after calving. Most cases of primary ketosis occur within the first 2 weeks of calving, and even most secondary ketosis (occurring after the onset of another disease) occurs within the first 30 to 60 days in milk. In general, less than 5% of the cows in a herd should experience clinical ketosis. However, some reports have indicated that the incidence of subclinical ketosis may affect 40% of cows, with the incidence rate varying widely among farms, and may be as high as 80% on individual farms.

The major focus prepartum to reduce the risk for ketosis after calving is maintaining feed intake in late gestation and avoiding overconditioning cows during late lactation and the dry period. Cows should dry off and freshen at a body condition score (BCS) of 3.5. Cows with a BCS equal to or greater than 4.0 will likely have lower intake prepartum and be at higher risk for fatty liver and ketosis at and after calving. Recent work at the University of Minnesota indicates that cows with a BCS greater than 3.5 and producing over 16 lb of colostrum are at a higher risk for ketosis. Feeding programs for far-off and close-up cows should be designed to maintain intake during late gestation, i.e., minimizing the drop in intake during the last week of gestation, to reduce the risk for ketosis after calving. These prepartum diets should contain high-fiber forages and provide adequate but not excessive amounts of energy. A 20% or greater drop in intake prior to calving can result in elevated blood non-esterified fatty acids (NEFA). This situation leading into calving greatly increases the risk for fatty liver and ketosis.

The fundamental cause of ketosis is inadequate blood glucose relative to the demand for glucose by the mammary gland, often seen with increasing milk yield by fresh cows with low intake. Due to the inadequate dietary energy supply, the body mobilizes fat to provide the needed energy, thus leading to increased concentration of NEFA in blood. Overconditioned cows typically eat less and thus mobilize more body fat. Excessive rates and amount of fat mobilization (e.g., losing more than one BCS after calving) can result in an excessive amount of fat in the liver and the formation of ketones. The two primary ketones that increase in blood due to a shortage of glucose are β-hydroxybutyrate (BHBA) and acetoacetate, with BHBA being the primary focus in blood for assessing the ketotic status. Plasma or serum concentrations of BHBA in the range of 10 to 14 mg/dl in blood are regarded as subclinical ketosis and > 14 mg/dl as clinical ketosis, typically measured 7 to 14 days in milk.

Collecting blood and sending it to a lab for BHBA analysis is rather costly, and the delay in knowing the results limits time for response. To effectively diagnose ketosis for quick treatment, on-farm methods of analysis are needed. Some veterinarians and producers effectively use instruments designed to measure BHBA in diabetic patients, and these are available in most pharmacies. On-farm analysis of urine ketones (acetoacetate; e.g. KetoStix; Bayer Healthcare, LLC, Monheim Company, Germany) has been the common method for diagnosis of clinical ketosis. However, it is often difficult to get a fresh cow to urinate to use this method, and these methods cannot determine incidence of subclinical ketosis, which is usually a much more common problem than clinical ketosis. The validity of analyzing ketones in milk has been recognized for many years and practiced widely in Europe. An on-farm milk ketone test kit (Keto-Test; BHBA) is available in the United States by Elanco (Greenfield, IN). The best time to collect the sample of milk (fore-stripping of milk) is during a regular milking in the parlor. In addition, the cost of the milk test is considerably higher than for urine ketones.

The concentration of fat in milk or the ratio of milk fat to protein can be used to identify cows or herds at risk or ones that are experiencing problems with ketosis (Table 1). Simpler, less expensive instruments have been developed in recent years that are suitable for on-farm measurement of milk composition for individual cows. In addition, in-line sampling and analytical methodology are being provided by some of the milking equipment companies, which provide for milk composition data for every cow at every milking. Calibrations for these systems and usefulness for actual component values versus identifying deviations from the “norm” are still under evaluation.

Treatment and Prevention of Ketosis

Typical treatment for ketosis is an intravenous delivery of glucose, often in conjunction with oral drenching of propylene glycol. Sometimes, an injection of a glucocorticoid by a veterinarian may be used. Drenching with propylene glycol is useful in sustaining a supply of glucose for 3 or 4 days until feed intake can catch up.

Managers of herds at high risks for ketosis have these options: 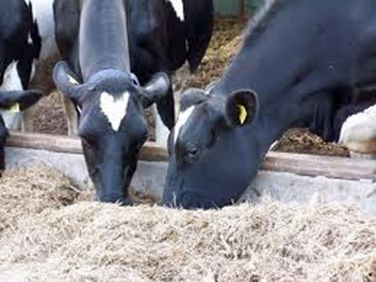 The costs associated with ketosis, including the loss of milk production, treatment costs, and occurrence of other secondary diseases, can lead to substantial reductions in profitability for dairy herds. Feed and cow management practices should be primarily focused on preventing ketosis, but timely identification of ketosis in individual cows is critical for quick interventions. Also, using propylene glycol or some feed additives may be useful in preventing ketosis in some high-risk herds. The best strategy for preventing ketosis is not overconditioning cows prior to calving and developing diets to minimize the drop in intake prior to calving and optimizing ruminal conditions after calving.