In recent months milk replacer costs have jumped $15 to $20 per bag, and we have entered into somewhat new territory in the economics of calf feeding systems. Since its introduction in the 1950s, one of the major advantages to feeding milk replacer has been a reduced cost compared to feeding whole, salable milk. But with milk replacer costs exceeding $60 per bag for standard products containing 20% protein, 20% fat and all-milk protein, the cost advantage is quickly eroding.

First, let’s take a quick look at what is driving milk replacer costs to these historic heights. The graph in Figure 1 shows the price of whey protein concentrate containing 34% protein (WPC-34) and dry whey used in milk replacer from 1991 to present. The recent run in prices is easily seen; since June 2006 prices for WPC-34 have more than doubled from $0.58/lb to over $1.48/lb (April 2007 average). To put this in perspective, over the past 10 years the price of WPC-34 has hovered around $0.60/lb. Figure 2 presents the history of WPC-34 prices, and shows multi-year averages as well as the monthly averages for 2006 and 2007. The increase in dried whey price has followed a similar pattern. These two ingredients are the primary source of protein in all-milk formula milk replacer. The price of WPC is driven by growing demand for use in human foods, both in the US and around the world. On the positive side, whey prices are used to set Federal Order minimums, and this increase in demand for whey products has contributed to increased milk prices. 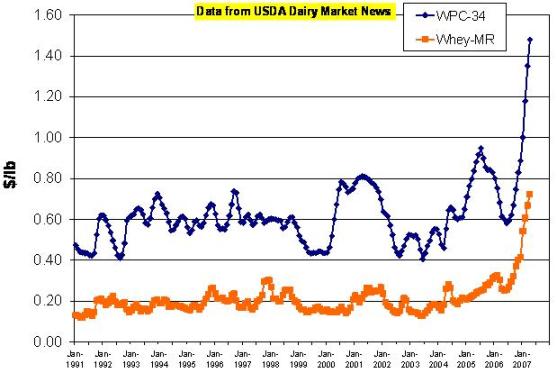 Figure 1. Prices ($/lb) for whey protein concentrate (34% protein; WPC-34) and dried whey powder (milk replacer use only; Whey-MR) from 1991 through April 2007. Reported prices are a monthly average, although prices change daily and are reported by USDA weekly. 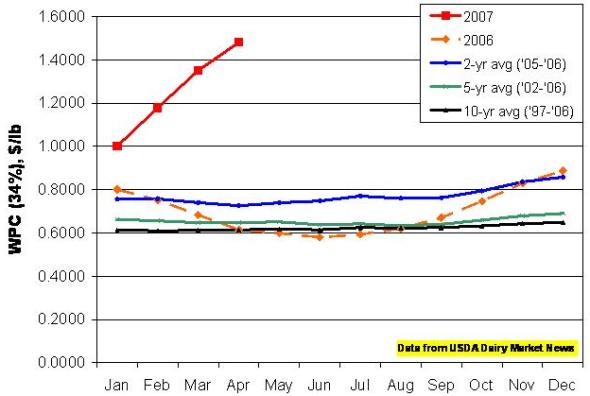 Figure 2. Price ($/lb) of whey protein concentrate (34% protein; WPC-34) from 1997 through April 2007. Reported prices are a monthly average, although prices change daily and are reported by USDA weekly.

Switching from All Milk to Alternative Proteins in Milk Replacer

There are several options to reduce feed costs for calves on milk; each has pros and cons, and it is important to consider the goals of your calf rearing program in addition to obvious cash costs. Before we get into the actual feed, this is a perfect opportunity to adjust weaning age. If you currently wean calves at any age over 5 to 6 weeks, you are spending more money on milk replacer than is required. Herds with excellent calf management can push weaning age, and the associated feed costs, even lower with great success. For more information on early weaning strategies, read DAS Factsheet 07-117, Early Weaning Strategies.

From the time that milk replacers were introduced there have been two primary objectives in formulating them: first, to find ingredients containing available, digestible protein, and second, to reduce the cost of feeding calves. Balancing these two objectives is not easy. Historically as the price of ingredients has changed, milk replacer manufacturers have changed their formulations to reduce the cost of their products. Once a source of protein is identified, processing techniques are refined to maximize utilization of the protein. The increased processing typically opens up new uses for the protein and increases its value so that manufacturers begin to search for another protein source.

Milk replacer cost is highly dependent on the ingredients used, especially the sources of protein. Milk proteins can be replaced by a variety of non-milk proteins such as soy, wheat, egg, blood plasma, and potato. These non-milk proteins are less expensive than milk protein, but it is important to understand that they are not equivalent to milk protein. When switching from milk to non-milk protein in a milk replacer, calves may have lower growth rates. Soy proteins are the most researched of these alternatives, but there are several types of soy protein that vary in their acceptability. See Table 1 for a list of alternative proteins categorized by their suitability for use in calf milk replacer. Proteins in the preferred category are milk proteins. Those categorized as “acceptable” are processed specifically for milk replacer and their use is supported by research. Proteins in the “marginal” category are sometimes used in milk replacer, but they may vary in quality. Use these sources with caution. 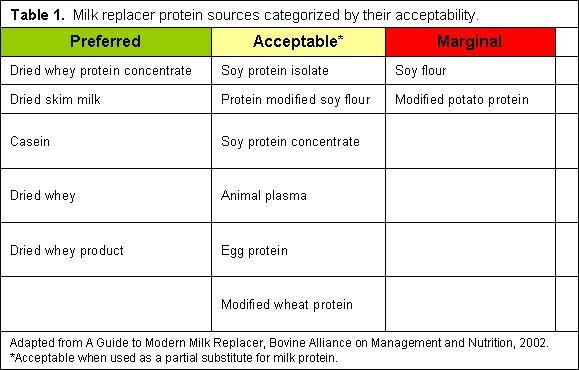 Non-milk proteins are not acceptable for feeding calves less than 3 weeks of age. These calves do not digest non-milk proteins efficiently. A further consideration is that every time calves’ feed is changed, they will have a period of adjustment. Changing feeds around 2 to 3 weeks of age puts stress on calves at the precise time when their immune system is at its lowest point. Protection from colostrum is waning, and the calf’s own immune system has not developed full functionality. Also if calves are weaned at 4 or 5 weeks, they will barely have had time to adjust to the new milk replacer before weaning. Therefore, combining early weaning with a change in milk replacer is not advised. Another consideration when using products with alternative proteins is that two milk replacer products are needed to meet the needs of all calves. These products must be kept separate on the farm, which requires increased management time to handle two products each day for calves of various ages.

Another option, one that has been discouraged for over 50 years, is feeding whole milk from the bulk tank. As mentioned previously, this has not typically been a profitable option; however, given the extremely high prices for milk replacer, it is an option that should be considered. Please note, we are not talking about waste milk, we are looking at salable whole milk. We have developed a simple spreadsheet to evaluate the cost of feeding whole milk compared to feeding milk replacer. The spreadsheet calculates the cost per pound of dry matter fed and also provides a comparison of the amount of nutrients provided by each feed. Use of the spreadsheet is outlined below.

See Appendix Figure 1. Users enter information for whole milk and milk replacer. For whole milk, the mailbox milk price and nutrient composition (total solids, true protein, and fat) of milk are entered. These values should be available on the milk check; if total solids are not reported, a value of 12.5% can be used. Users also enter the weight of liquid whole milk to be fed to calves. For milk replacer, the cost and weight per bag, the nutrient content (dry matter, crude protein, and fat), and the weight of powder fed to calves are entered. Dry matter content of milk replacer should be listed on the bag, but if not a value of 95% can be assumed.

Once this information is entered, the spreadsheet calculates the cost per pound of dry matter for each feed. It also provides the cost for 50 pounds of milk solids for each feed. The value reported here for whole milk can be used for a “quick and dirty” comparison to the cost of a bag of milk replacer. For example, if the value for whole milk is $62, then if milk replacer exceeds $62 per bag, whole milk is a more economical feed. Notice that the value for milk replacer in this section is higher than the actual cost per bag. This is because the dry matter content is less than 100%. The final cost calculation is the daily cost per calf, which considers the amount fed in addition to the cost.

In addition to direct costs, consider the following before switching from milk replacer to whole milk:

Of course, waste milk from treated or recently fresh cows that cannot be sold is another potential option to reduce your milk replacer cost. There are several management issues that must be addressed to take best advantage of this milk. First, it is strongly recommended that waste milk be pasteurized. This milk is more likely than whole, salable milk to contain large populations of infectious organisms, and proper pasteurization is very effective in reducing bacterial numbers. In addition, feeding waste milk often exposes calves to more antibiotics and increases the risk of antibiotic residues in market calves. This is less of an issue if calves are strictly kept as herd replacements.

It is also important to recognize that the nutrient value of waste milk often fluctuates from day to day, depending on the number of cows contributing milk and the reason their milk is being kept out of the bulk tank. Daily variation in the milk’s composition can contribute to scouring in calves. This is most important in smaller herds where 1 or 2 cows make up a majority of the waste milk. In larger herds, this problem is often diluted out and is not as critical.

Another challenge is developing a feeding strategy that maximizes the use of waste milk, but does not compromise calf health or growth. Most farms do not have enough waste milk to supply all calves from birth to weaning; if there is enough waste milk to meet this need, it is highly likely that milk quality and herd health are compromised. One potential strategy is to use some high somatic cell count cows to add to the waste milk supply, which at the same time lowers your bulk tank SCC level. If high SCC milk is fed to calves, it becomes even more important to prevent intersucking. Research shows that calves can drink milk containing mastitis pathogens with no added risk of developing infections in their mammary gland later in life. However, those bacteria can be spread from one calf’s mouth to another’s udder if intersucking is allowed. The simplest way to prevent intersucking is to house calves individually.

To make up for the gap between available waste milk and that needed to feed calves, some calves must still be fed milk replacer or whole milk for all or part of the pre-weaning period. It is preferable to place highest priority on the nutrition of calves less than 3 weeks of age, as they are less able to cope with changes in feed than older calves.

Penn State College of Agricultural Sciences research, extension, and resident education programs are funded in part by Pennsylvania counties, the Commonwealth of Pennsylvania, and the U.S. Department of Agriculture.

Where trade names appear, no discrimination is intended, and no endorsement by Penn State Cooperative Extension is implied.

This publication is available in alternative media on request. 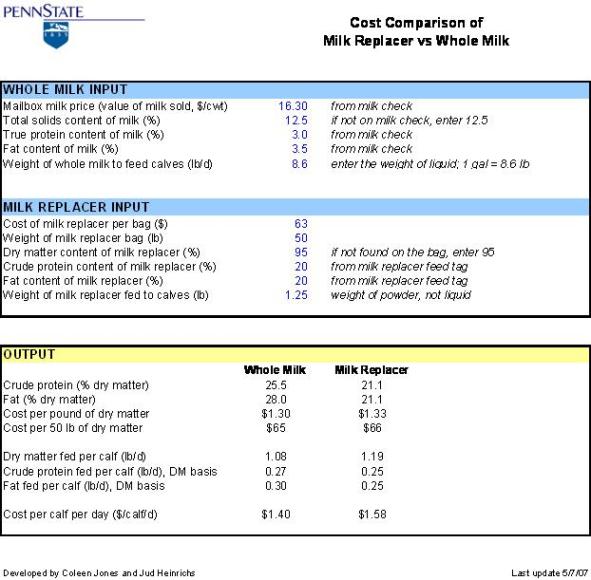