Fluid milk and most dairy products have what an economist would call an “inelastic” demand and, dairy farmers exhibit an “inelastic” supply response to changes in milk price. The term is really just a way to say that dairy farmers make relatively small changes in short-run milk production decisions when the milk price changes and consumers do the same thing with purchase decisions. This type of behavior can lead to volatile prices.

We have always had seasonal production for milk. Milk supplies are greater in the spring than they are in the fall largely due to calving patterns, historically production increases when cows were out of the barn and grazing on fresh grass, and perhaps the hours of daylight. Grazing is less important today than many years ago, but seasonal production patterns persist.

Consumers also have a seasonal pattern to their consumption. Demand for fluid milk is at its greatest in the fall when schools are back in session. Also, we have seasonally strong demand for cheese and other dairy products during the Thanksgiving through Super Bowl time period.

Unfortunately, the seasonal consumption pattern is almost counter-cyclical with the production pattern. Given the inelastic supply and demand, milk prices used to swing by more than 150 percent from spring to fall as not enough milk was produced in the fall and more than enough produced in the spring.

One of the answers to moderating seasonal price swings was to carry an inventory of storable dairy products. Cheese, butter and nonfat dry milk are made in greater volume when milk supplies are in surplus and are taken out of storage when milk production is short. The government implemented the Dairy Price Support Program (DPSP) in 1949 to purchase as much of these storable dairy products as anyone wanted to sell to them at announced prices and they would sell those products back to the market at a some-what higher price later on. This program was very successful at moderating seasonal price swings.

The Secretary of Agriculture had authority to move the DPSP purchase prices in response to growing or shrinking inventories of product. This helped to keep government-owned dairy stocks at reasonable levels. However, in response to rapidly increasing costs of production in the 1970s, dairy farmers were demanding a more responsive DPSP that would increase milk prices more quickly. Jimmy Carter was elected president in 1976 with, among other things, promises to raise DPSP prices. The Secretary of Agriculture no longer had authority to move prices in response to government stocks of dairy products. Instead, support prices were changed according to a formula—80 percent of parity.

In 1983, government purchases under the DPSP cost more than $2 billion and the products purchased amounted to nearly 15 percent of the U.S. milk supply. It became obvious that the program needed to be changed and ultimately, the support price was reduced in 50 cent increments until we finally reached prices that would clear the markets in 1989. This however, returned the price volatility that most producers had not remembered in their lifetime.

Today’s milk price swings will still have a seasonally influenced pattern but price movements are not purely spring-to-fall. Anything that disrupts production, such as regional droughts or wet weather, or affects demand, such as exports of milk powder, can have a dramatic price effect. This occurs because the government isn’t a large dairy product stockholder actively buying and selling product to balance the short-term differences between production and consumption.

It is unlikely that the price support program will be reinvigorated—in fact, it wouldn’t be a surprise to see it go away altogether. An active DPSP would be contrary to the direction of trade talks with the WTO and potentially exposes the USDA to large budget expenditures. We could also have direct counter-cyclical payments to producers when prices hit a pre-set low level. This would have the advantage of not disrupting market prices (like the DPSP does) but it would not be WTO favorable and could still be costly.

Futures markets for milk are now well established and individuals may have the opportunity to lock in prices that are attractive to them either directly in the futures markets or through forward contracting with cooperatives. Futures markets are not a long-term means of enhancing revenues, but they will help individuals manage price risk and can moderate volatility for any individual, but not the entire market.

Cooperatives Working Together (CWT) is a voluntary program of milk producers with an aim of influencing market prices. Under this program producers agree to assess themselves 10 cents per cwt. and the proceeds are used to both control the milk supply by accepting bids from farms wishing to sell their herds, and enhance demand by subsidizing exports of dairy products. As a voluntary program, CWT suffers from the “free rider” problem. I.e., a dairy producer might choose to not participate realizing that if most other producers contribute and the program is effective in stabilizing or enhancing prices, he/she will be better off by keeping the 10 cents per cwt. of their own milk. As more producers respond in this way, the value of the program begins to erode.

One means to moderate milk price fluctuations that has been suggested is a refundable assessment imposed on dairy producers by the power of the government1. The idea of the refundable assessment is that all producers are assessed an amount that can be reclaimed at a later date if their own milk production hasn’t increased by more than a specified amount.

Our own modeling suggested that the optimal assessment was $1.00 per hundred-weight which would be refunded if that producer wouldn’t increase their milk production by more than 3 percent in the subsequent year. In fact, those producers who qualify for the refund would get back their own dollar plus a portion of any money in the pool from producers who increased production by more than that amount. And, under the production decisions of a refundable assessment program, milk price volatility is very nearly eliminated.

From the standpoint of the federal government, a refundable assessment program is a zero cost and no taxpayer burden. I also believe that the World Trade Organization (WTO) would not object to such a program as it doesn’t disrupt market signals and does not subsidize exports of dairy products.

Price volatility is endemic to the dairy industry. It was a problem 100 years ago but was suppressed with an active dairy price support program. Today, individual producers may be able to reduce their own exposure to price volatility with futures markets and/or forward contracting. If market-wide reduction in price volatility is desired, a refundable assessment program may be the most effective tool that could be implemented today.

1More information about a refundable assessment program is available on our web site at http://dairy.cornell.edu. 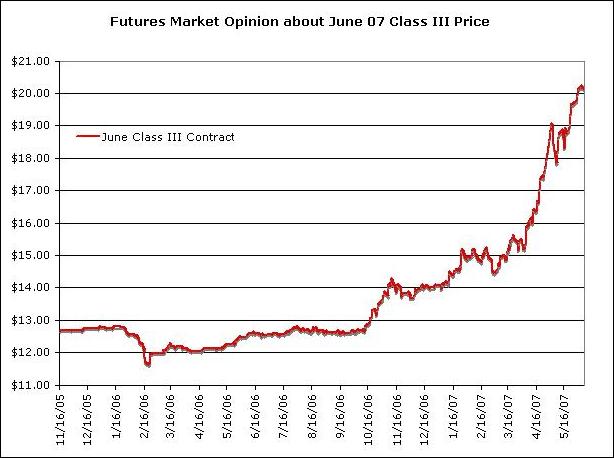 All dairy producers know that prices received have been very volatile. But, opinions about milk prices not yet received can also vary tremendously. The chart shows the fu-tures market price opinion about the June 2007 milk price from the time the contract be-gan trading (near the end of 2005) to near the time the contract expired. Over that time, the opinion of June 07 price varied from less than $12.00 per hundredweight to more than $20.00 per hundredwieght—a nearly 75 percent increase!