Any milk producer is aware that the U.S. legal limit for somatic cell count (SCC) in raw milk is 750,000 cells/ml. Most producers are selling milk well under the limit. In 2003, the DHI national average was about 319,000 cells/ml with considerable variation among state averages. In general, the hot and humid states of the Southeast produce the highest cell counts. SCC also varies a great deal among herds within any give state.

Federal order reforms implemented in 2000 attempted to recognize the value of low SCC milk. Four of the orders (Mideast, Upper Midwest, Central and Southwest) have a SCC component built into the multiple component pricing payment. The rationale for this payment was that somatic cells negatively impacted cheese yield. The federal order SCC formula is calculated to reflect the effect on cheese yield. In truth, somatic cells influence much more than yield.

The quality of manufactured dairy products and fluid milk is greatly affected by the initial quality of the raw milk used. Enzymes present in milk will deteriorate milk proteins and fat. As the somatic cell count increases, the level of heat-stable enzymes that originate from the cow also increase. The most important enzyme is a protease called “plasmin” which breaks down milk proteins. “Lipase” is the enzyme that breaks down milk fat. Both of these enzymes can survive pasteurization and will ultimately produce off-flavors in milk and dairy products. The quality of aged cheeses and extended shelf-life milk and dairy products is reduced with high SCC milk.

What is Low SCC Milk Worth?

The federal order SCC formula gives us one idea of what a SCC is worth. At fairly normal block cheese prices, you can gain about 7 cents per cwt by reducing your SCC by 100,000 cells/ml. The formula provides premiums for milk with less than 350,000 SCC and deductions for milk above that threshold.

Remember, all federal order prices reflect minimum prices that must be paid—processors are welcome, and indeed often do pay more than the minimum for the milk they purchase. The federal order prices are usually set at a level that gives the market room to express value in the form of over-order premiums.

In other regions of the country where federal orders do not have SCC pricing, voluntary premiums are often still paid. We have conducted a study of producer milk checks for August milk over the last four years. This past year, about 15 different handlers in New York alone paid voluntary premiums for SCC. There were some differences among handlers in the payment programs, but most payment levels very closely followed what MMPA was doing in Michigan.

The Carrot or the Stick?

The chart shows the SCC payments in August, 2003. In each of the three cases—federal order, MMPA and various handlers in New York—there are two distinct portions of the graph. Milk with less than 350,000 cells/ml has a premium being paid and milk with more cells incurs a penalty. The market for SCC also shows us that high quality milk commands a greater premium than the federal order minimum.

There is a body of economic literature that suggests that a stick is more effective than a carrot. In other words, producers respond more readily to a penalty than they do to a premium of equal size. That is why the premiums must be correspondingly larger than the penalty to encourage the production of milk with less-than-average SCC.

The Future of Milk Quality

There are exciting new technologies in dairy processing. I believe that we will see an increasing use of membrane filtration in dairy plants to fraction milk much further than the skim and cream separation that is common today. One use of microfiltration membranes is the removal of bacteria and somatic cells. However, that doesn’t mean that the quality of milk produced doesn’t matter. Remember that plasmin and lipase are present in greater levels in high SCC milk and will ultimately produce off-flavors that cannot be removed by membranes.

The European Union already has a lower legal limit of 400,000 SCC for raw milk. Our higher limit has been a trade issue for U.S. companies trying to export dairy products to Europe often requiring that milk be segregated to produce product that is acceptable to foreign buyers.

Public health standards for bacteria and somatic cell counts of raw milk are designed to protect public health not to maximize dairy product quality and shelf-life. The ever-increasing demands from the evolving structure and strategies of both national and international food retailing and food service present new challenges, but also new business opportunities. A stronger partnership between milk producers and milk processors to equitably share the costs and benefits of improved milk quality provides an opportunity for expanded marketing and increased dairy product consumption for the future.

Work with your handler to see if a SCC program is available to reward you for improving your milk quality. Most of the time, the bulk of the somatic cells are being contributed from very few animals in the herd. Perhaps as our market prices for milk are falling, it’s time to consider culling the chronic offenders. 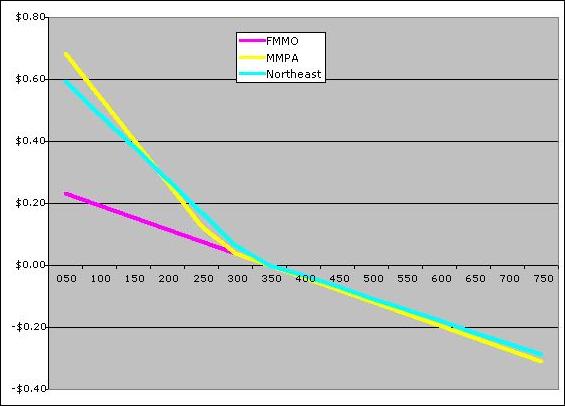