The link between P intake and P excretion

In dairy cows, several studies indicate a direct link between P intake and P excretion (Morse et al., 1992; Wu et al., 2001; Knowlton and Herbein, 2002). Morse et al. (1992) were the first to show this link. This Florida study used twelve cows and fed diets containing one of three levels of P (.30%, .41%, .56% of dietary DM). Excretion increased linearly with increasing intake, and nearly all of the difference in P intake with the high P diet compared to the low P diet was excreted (Figure 1). 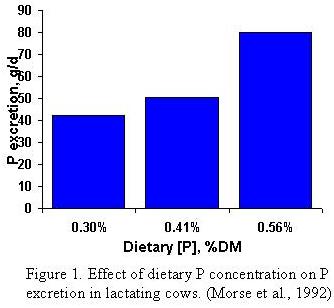 Overfeeding of dietary P is common in the field, with overfeeding of 20 to 40% in excess of published requirements commonly observed (Sink et al., 2000). A survey conducted by Wu et al. (2003) in Pennsylvania indicates that the extent of overfeeding is less now than was indicated in these earlier surveys. Assuming that P consumed above the requirement of the animal will be excreted, reducing overfeeding of P could reduce P excretion by 20 to 40% in the dairy industry.

Why do we overfeed P?

Phosphorus is often fed to dairy cattle in excess of published requirements because high P diets are commonly believed to improve reproductive performance. This perception originates from the observation that severe P deficiency (< 0.25% of dietary DM) impairs reproductive performance in cattle (Eckles et al., 1932). Modern dairy rations are much higher in P even without supplementation, and in all of these deficiency studies, P intake was seriously confounded with intake of energy and other minerals. Although severe P deficiency may impair reproductive performance, there are no research data to suggest a benefit from feeding P to dairy cows in excess of NRC requirements (~0.37%P).

In fact several studies reported no impact of dietary P concentrations of 0.33 to 0.35% of dietary DM on days open, services per conception, or calving interval (Brintrup et al., 1993; Brodison et al., 1989; Wu and Satter, 2000). A review by researchers in Wisconsin (Satter and Wu, 1999) summarized thirteen studies with 785 lactating cows fed diets low in P (0.32 to 0.40% P) or high in P (0.39 to 0.61% P).Dietary P had no effect on days to 1st estrus, days open, services per conception, days to 1st AI, or pregnancy rate. (The apparent overlap in low and high P diets is because Satter and Wu categorized treatments low or high as they were categorized in the original studies. The 0.39% “high” P diet was not in the same study as the 0.40% “low” P diet.)

One final reason P is overfed is the inclusion of feeds in the diet that are naturally high in P. Many byproduct feeds are high in P, most notably the byproducts of corn processing and ethanol production. These are increasingly popular feed supplements for dairy cattle because of the protein and energy they supply. However inclusion of these feeds often increases the dietary P content beyond requirements.

There is no easy answer to the dilemma of high P byproducts. In the short term, producers using these feeds should remove unneeded supplemental inorganic P from diets. In the long run the true cost of the use of these high P feeds should be carefully considered. If their inclusion will cause significant nutrient imbalance and lead to difficulty meeting environmental regulations, then these feeds may not be as inexpensive as they appear.

Reducing P intake has both economic and environmental benefits. The impact of reducing P intake on net farm income depends upon the regulatory conditions affecting the dairy producer. If the producer is not under P-based nutrient management, and applies manure without regard to its P content, the only impact of feeding excessive P is on the feed bill (Table 1). A 100 cow herd increases their feed bill by $750 to $850/year by feeding P at 0.45% of dietary DM vs. 0.40% dietary DM, depending on milk yield and feed intake. With P at .50% of dietary DM, the feed bill is increased between $1500 and $1700/yr, and at .55%, feed costs are increased between $2250 and $2500/yr. For the producer under mandatory P-based nutrient management, the costs of excessive P supplementation and excretion are much greater. These costs include the increased feed bill, the cost of exporting manure in excess of what can be applied to land, and the cost of purchased N fertilizer.

Evaluating a dairy farm milking 100 cows with different cropping strategies, we can estimate the impact P intake has on acreage required for manure application on a P basis (Table 2).

Reducing the amount of P in manure through nutrition is a powerful, cost effective approach to reducing potential P losses from dairy farms. The current NRC requirements are based on sound, current research, and should be followed in ration formulation. Feeding rations formulated to meet without exceeding the NRC requirements will improve P utilization, reduce environmental impact, and make it easier for producers to meet regulatory obligations.

This fact sheet reflects the best available information on the topic as of the publication date. Date 5-27-2007

This project is affiliated with the LPELC.