The need to control internal parasites will exist as long as cattle are grazing pastures. However, parasite levels are not the same on all pastures or in all cattle. Pastures that are heavily stocked generally have a higher parasite burden than lightly stocked ones. Cattle in a drylot are less likely to have heavy worm infections than those on pastures. Young cattle will typically have more internal parasites than older cattle. Therefore, the methods of controlling internal parasites should be developed to fit individual production situations. Strategic deworming starts with understanding the life cycle of problem parasites, identifying seasonal changes in parasite burdens and implementing cost effective control. A successful deworming program, along with good overall herd management, will increase milk production in cows and thereby increase weaning weights of calves.

The effects of internal parasites on cattle will vary with the severity of infection as well as age and stress level of the animal. In general, younger animals and animals under stress are most likely to show signs of parasitism. Mature cows acquire a degree of immunity to parasites that reside in the lower gastrointestinal tract. However, the brown stomach worm (Ostertagia ostertagi) has evolved to where it can evade the animal’s immune system. In addition, parasite burdens are most detrimental in mature cows near parturition because immunity is suppressed. Cows, especially dairy, in early lactation are often in a negative energy balance due to the stress of lactation. These cattle are affected more than cows in later lactation, when smaller levels of milk are being produced. Bulls are more susceptible to internal parasites than cows.

The effects of parasitism can be separated into two types – subclinical and clinical. Losses in animal productivity (milk production, weight gain, altered carcass composition, conception rate, etc.) are all subclinical effects; whereas, visible, disease-like symptoms (roughness of coat, anemia, edema, diarrhea) are clinical effects. The subclinical effects are of major economic importance to the producer.

Cattle can be infected by roundworms (nematodes), tapeworms (cestodes) and flukes (trematodes). Protozoans such as coccidia are another type of internal parasite; however, the helminths (worms) will be the focus of this discussion.

Roundworms are considered the most economically devastating internal parasites of livestock in Arkansas. The medium or brown stomach worm and the Cooperia species are the most common roundworms. Although cattle can be infected with tapeworms, their effect on animal performance is minimal compared to the roundworms. Problems associated with flukes occur in some parts of Arkansas. Problems with flukes arise in conditions that promote snail populations – poorly drained pastures and stagnant pools of water (ponds, ditches, etc.) in the pasture area. Snails are needed in the fluke life cycle.

Life Cycle of the Nematode
Figure 1 shows the life cycle of the nematode. In the host animal, adult nematodes produce eggs. The egg is expelled from the host with the feces, contaminating
the pasture. A first-stage larva hatches from the egg. The larva will molt two times before it becomes a third-stage larva. Once the larva is in its third stage, it is capable of migrating from dung pats and soil onto moist grass. Larvae can survive up to a year on pasture.
Infection occurs when the third-stage larva is consumed with the grass. The larva completes its life cycle in the gastrointestinal tract of its host. Once the adult stage is reached, copulation occurs and the life cycle starts over.
Unlike other nematodes, the medium stomach worm can spend part of its parasitic life cycle in hypobiosis, a condition similar to hibernation. Hypobiosis usually begins in the spring. The “hibernating” larvae do not emerge until summer. 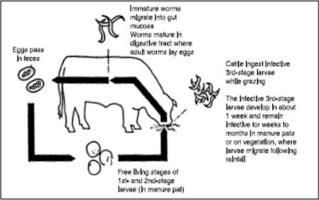 Life Cycle of the Fluke

The fluke’s life cycle requires two hosts – cattle and snails. The adult flukes are found in the bile ducts of cattle. The eggs are laid in the ducts and expelled with the feces. A larval stage hatches from the egg and infects the snail, where it reproduces asexually. Specific stages of the juvenile fluke leave the snail and encyst on aquatic vegetation. Cattle eat the vegetation and become infected. The fluke migrates to the liver, infects the bile duct and matures into an adult.

The amount of parasite pressure in a pasture varies with season and management. Parasite burden peaks during the spring and is lowest during the hot, dry summer months (Figure 2). Cattle in drylot systems typically have fewer worms and less seasonal variation. Parasite pressure will be less under good management conditions as well. Good herd management includes a good nutrition and health program. 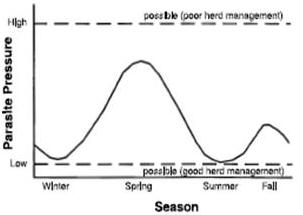 Parasite infection is diagnosed by either a fecal egg count or postmortem exam in the event of death. The postmortem examination is the most accurate method of determining parasitism. A postmortem exam shows the types of worms present and the damage to the animal.

Internal parasite infection levels can be estimated in live cattle by counting the eggs shed with the feces. The eggs are quantified as eggs per gram (EPG) of feces by a trained individual. An EPG is only an estimate of parasite populations. Results from this test may be misleading. Variations in egg counts can arise from the ratio of immature to mature worm populations, worm species, degree of inhibition, consistency of the manure, etc. Realistically, a herd should be sampled on multiple occasions to determine worm prevalence.

As discussed earlier, part of the nematode life cycle is on pasture. Pasture management methods designed to reduce third-stage larva populations include the following:

Anthelmintics provide an excellent tool for controlling parasites. Application of dewormers should not be aimed at treating infected cattle showing signs of parasitism. Instead, apply dewormers in a timely manner to reduce infection before symptoms of disease occur. Treatment should also be aimed at interrupting the life cycle of the parasite in an effort to minimize pasture contamination.
Unfortunately, instead of implementing a deworming program, producers typically deworm their cattle when the herd is being worked for another purpose. The 1997 NAHMS cow/calf health survey showed that 50 percent of beef cattle operations in the United States deworm their herd according to tradition. Twenty-one percent base treatment upon animal appearance. In the latter case, the herd has already suffered economic losses. Only 14 percent of beef cattle producers in the U.S. follow the recommendations of a veterinarian.

Many anthelmintic products are on the market. Most of the products are either avermectins/ milbemycins (ivermectin, dormectin, eprinomectin, and moxidectin) or benzimidazoles (oxfendazole, albendazole, fendbendazole). Avermectins/ milbemycins provide an additional benefit of external parasite control plus internal parasite control, as well as persistent protection for days to weeks after treatment. When selecting a dewormer, the following should be kept in mind:

Table 1 is a summary of the common products currently available. Table 2 summarizes the effectiveness of the different active ingredients. Remember, the production situation on every farm is different. Evaluate the pros and cons of all products before choosing a dewormer. If possible, conduct a fecal egg count before and after deworming to evaluate the effectiveness of the program. 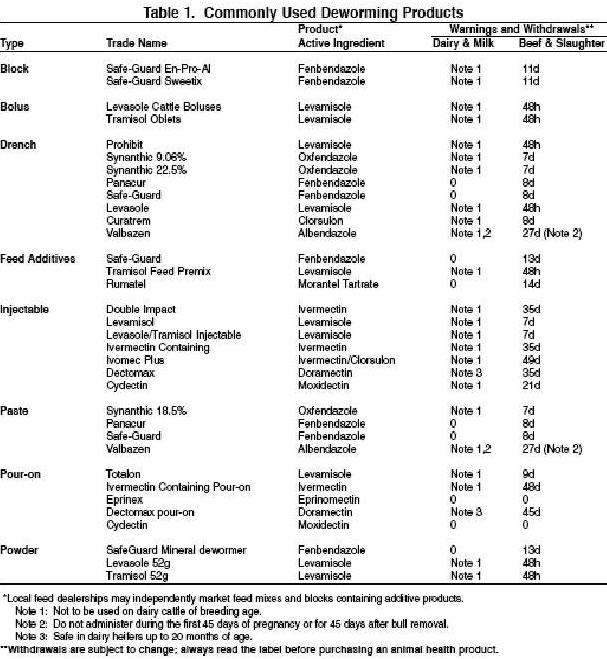 Always read and follow the instructions on any animal health product. Application rates were developed through extensive research to identify the best and safest level of control. Undertreatment of animals can reduce the level of control and may increase the chances of parasites developing resistance to dewormers. Applying dewormers above recommended levels increases withdrawal times, and the compounds in dewormers can become toxic to animals when applied at extremely high rates. Overdosing is costly. Over-application usually provides the same amount of control as recommended levels, but at a higher cost.

As with any chemical used to control parasites, the potential for parasites to develop resistance exists. No reports of extensive parasite resistance to currently used bovine anthelmintics exist in the U.S.; however, countries with livestock numbers comparable to the U.S. have reported occurrences of resistance in areas where dewormers were used extensively.

Mature cows should be treated at least one time per year. The best time to treat the mature cow is near freshening. The mature cow’s susceptibility to parasite detriment increases during this time due to stress of production and a suppressed immune system. In situations where parasite levels may be high, such as overstocked pastures, treating twice a year may be necessary. In other situations, parasite levels may be low enough that mature cows do not need any treatment. These conditions can only be determined by treatment followed by critical observation. Bulls, unlike cows, tend to be more susceptible to parasites and should be treated twice a year, spring and fall. Since mature cows and bulls have some degree of acquired immunity to internal parasites, the older benzimidazole-type products should do a sufficient job of controlling parasites in these animals.

Treatment of calves should begin when they reach three to four months of age and again at weaning if they are kept as replacements or stockers. The avermectin/milbemycin-type products will provide the best means of controlling parasites in these animals. Treating calves every three to four months may be necessary to optimize parasite control until the calves become yearlings. Yearlings can be treated on a seasonal basis, spring and fall, until they are mature cows (a mature cow is generally recognized as an animal pregnant with her second calf). If calves are backgrounded in a drylot, one initial treatment should be sufficient.

Visit a local veterinarian about setting up a herd health program that includes a strategic deworming program.

Deworm dairy heifers and bulls on pasture according to the recommendations for beef calves and replacements. Initial deworming of calves should occur three to four weeks after turnout onto pasture in the spring.

If calves or replacements are raised in total confinement or drylot, take egg counts to establish the level of parasitism and design a deworming program accordingly. Young calves weighing less than 400 pounds will need to be dewormed more frequently than 800-pound yearlings, as younger calves are more susceptible to worms than older animals.

The first step in designing a deworming program for lactating dairy cows is to determine the level of parasitism. Research data shows variable responses to deworming for mature dairy cattle. Deworming at early lactation increases milk yields more consistently than any other time of treatment.

Since dairy cows are most likely to show a positive response to deworming during early lactation, the first choice of a deworming program is to treat at freshening. If at all possible, a producer should treat some cattle and monitor the production of all cattle. This would serve to quantify the importance of worms in the operation.

In high production (over 18,000 pounds of milk/cow/year and seasonal calving in the fall), another option is to deworm all cows at one time and then again six to eight weeks later. Another option for herds with high and moderate levels of contamination is to deworm in the fall and again in the spring. This latter option may not be economical since cows with low parasite loads and cows in mid-to late-lactation may not respond with an increase in milk production after treatment. Use only products approved for use in lactating dairy cattle, and consider milk withdrawal times when treating.

Visit a local veterinarian about setting up a herd health program which includes a strategic deworming program.

The information given herein is for educational purposes only. Reference to commercial products or trade names is made with the understanding that no discrimination is intended and no endorsement by the University of Arkansas Division of Agriculture,Cooperative Extension Service, is implied.