Production of maximum quantities of high quality milk is an important goal of every dairy operation. On the other hand, poor milk quality affects all segments of the dairy industry, ultimately resulting in milk with decreased manufacturing properties and dairy products with reduced shelf-life. How is milk quality determined? Several different methods are used to assess milk quality. Some methods such as the somatic cell count (SCC) and standard plate count (SPC) are mandated by the federal Grade “A” Pasteurized Milk Ordinance, which is a document that specifies safety standards of Grade “A” milk. Other methods, while not mandated, are useful to monitor milk quality and to help diagnose potential on-farm problems/deficiencies associated with abnormally high counts and poor quality milk. The following is a brief description of the primary methods used to assess raw milk quality.

Poor quality milk has a high number of somatic cells and is an inferior product with reduced processing properties resulting in dairy products with a reduced shelf-life. On the other hand, high quality milk has a very low number of somatic cells, a longer shelf-life, tastes better and is more nutritious. One characteristic feature of cows with mastitis is a significant elevation in the number of somatic cells in milk. Milk from uninfected mammary glands contains less than 100,000 somatic cells per mL. A milk SCC of more than 200,000 per mL suggests that an inflammatory response has been elicited, a mammary quarter is infected or is recovering from an infection, and that milk has reduced manufacturing properties. It is not uncommon for milk from cows with subclinical and/or clinical mastitis to contain several hundred thousand and even millions of somatic cells per milliliter of milk. Thus, an increase in the SCC of milk is a good indicator of mastitis or inflammation in the udder. Infection of the udder by mastitis pathogens alters milk composition and reduces milk yield. Most studies that evaluated the influence of mastitis on the composition of milk used SCC as the basis for determining the infection status of udders and for determining the degree of inflammation.

The bulk tank SCC (BTSCC) can be used to gauge the udder infection status of a dairy herd and also gives a good indication of the loss in milk production in a herd due to mastitis. As the BTSCC increases, the percentage of mammary quarters infected increases and the percentage production loss increases. Small increases in SCC can impact production. Most herd milk contains between 200,000 to 500,000 somatic cells per mL of milk. These herds are losing at least 8% in potential milk production. Thus, methods of mastitis control that reduce SCC will not only improve milk yield and composition but will also decrease economic losses due to mastitis.

A recent report published by the USDA Animal Improvement Program Laboratory summarized SCC data from all herds in the United States enrolled in the Dairy Herd Improvement (DHI) testing program for 2007. The good news is that the national SCC average for 2007 was 276,000 cells per mL of milk, which is 12,000 cells per mL lower than the 2006 figure. The bad news, however, was that 3.5% of U.S. herds had SCCs in excess of 750,000, and 24% of the national dairy herd had SCC of more than 400,000. In 2006, almost 4% of U.S. herds had SCC of more than 750,000 per mL, and 25% of the national dairy herd had in excess of 400,000 SCC per mL. The SCC of milk produced by dairy farms in the southern region of the United States over the last 10 years was about 35% higher than the U.S. average, with a yearly range of approximately 30% higher in 2000 to almost 41% higher than the U.S. average in 2003. These data demonstrate quite clearly that there is much room for improving milk quality in the United States, and this is particularly the case for milk produced on dairy farms in the Southeast.

Preliminary Incubation Count (PI count): The PI count is an estimate of the number of pyschrotrophic, or cold-loving, bacteria in milk. The PI count is not a regulatory test, and results of this test are interpreted as a general reflection of milk production practices on the farm and used as a tool to identify inadequate on-farm sanitation practices and holding temperature of milk in the bulk tank. The PI count is conducted by holding milk at 55°F for 18 hours. Bacteria that grow under refrigerated conditions are enumerated using the SPC method described above. PI counts are generally higher than SPCs. Selection of a PI count cut-off and interpretation of PI count results are difficult because variability in PI counts negatively influences repeatability. Some milk plants use a specific cut-off number while others use PI counts in relation to SPC. PI counts less than 10,000 cfu/mL are considered low, while PI counts more than 20,000 cfu/mL are considered high. A PI count three to four times higher than the SPC is suggestive of potential problems related to cleaning and sanitation of the milking system or poor udder preparation before milking (Figure 1). Failure to cool milk rapidly, marginal cooling, prolonged storage times, milking cows with wet teats, and/or extremely wet and humid weather conditions may also result in high PI counts. A PI count equal or slightly higher than a high SPC (more than 50,000 cfu /mL) suggests that the high SPC is possibly due to mastitis (Figure 1). The PI count has been used by some as an indicator of the shelf-life of processed dairy products. However, research conducted at Cornell University and Penn State University has shown that the PI count alone cannot be directly correlated with the flavor quality of raw milk or quality or shelf-life of processed dairy products. PI counts are most useful with data from other tests and additional information such as farm observations and inspections.

Laboratory Pasteurization Count (LPC): The LPC, also known as the thermoduric count, is an estimate of the number of bacteria that can survive laboratory pasteurization at 62.8°C (143°F) for 30 minutes. This process destroys most of the mastitis causing pathogens, selecting for those bacteria that can survive pasteurization temperatures (thermoduric bacteria). This is not a regulatory test required by state or federal agencies; however, some milk processors perform this test to ensure quality of the final product. Bacteria not killed by pasteurization are enumerated using the SPC method. LPCs are generally much lower than. An LPC of more than 200 cfu/ml is considered high (Table 1). A high LPC is most often seen with persistent cleaning problems; faulty milking machine or worn out parts such as leaky pumps, old pipe line gaskets, inflations and other rubber parts; and milkstone deposits. Significant contamination from soiled cows can also contribute to high LPCs.

Coliform Count (CC): The CC is a test that estimates the number of bacteria that originate from manure or a contaminated environment. Milk samples are plated on Violet Red Bile agar or MacConkey’s agar and incubated for 48 hours at 32°C (90°F), after which typical coliform colonies are counted. Coliform counts reflect hygiene and sanitation practices followed on the farm. Coliforms enter the milk supply as a consequence of milking dirty cows or dropping the milking claw into manure during milking. Coliform counts >100 cfu/mL suggest poor milking practices, dirty equipment, contaminated water, dirty milking facilities, and/or cows with subclinical or clinical coliform mastitis. 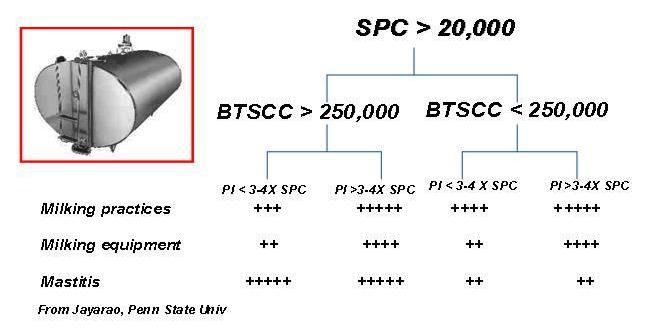 Production of maximum quantities of high quality milk is an important goal of every dairy operation. Poor quality milk affects all segments of the dairy industry, ultimately resulting in milk with decreased manufacturing properties and dairy products with reduced flavor quality and reduced shelf-life. Several different methods are used to assess milk quality. Some methods such as the SCC and SPC are mandated by the Grade A Pasteurized Milk Ordinance. Other methods, while not mandated, are useful to monitor milk quality and to help diagnose potential on-farm problems/deficiencies associated with abnormally high counts and poor quality milk.

Recently, some milk buyers and dairy processing plants have made changes to their milk quality requirements for incoming raw milk. These changes have occurred, in part, by demands from retailers and major food service companies requiring milk with a higher quality to achieve a longer shelf-life. SCC and SPC limits for raw milk to be acceptable at dairy processing plants may decrease to levels much lower than they are now, making it increasingly problematic for dairy producers to meet these higher standards. In addition, some processing plants use PI counts and LPCs in addition to SCC and SPCs to assess milk quality.

Production of higher quality milk will place a much greater emphasis on management strategies to minimize contamination of raw milk such as cow and equipment cleanliness, and sanitation procedures; and management strategies for the prevention and control of mastitis to reduce the number of somatic cells in milk. Effective milking-time hygiene, proper milking machine function, pre- and postmilking teat disinfection, lactation therapy, antibiotic dry cow therapy and culling of chronically infected cows are time-tested management strategies for controlling mastitis and are used extensively throughout the world. Providing and maintaining a clean, dry, comfortable environment for heifers, lactating and dry cows will reduce/minimize problems associated with environmental contamination of raw milk while also reducing mastitis caused by environmental mastitis pathogens.

A safe, wholesome, abundant and nutritious milk supply should be the goal of every dairy producer in the world. Safety and quality of dairy products start at the farm and continue throughout the processing continuum. To meet increased raw milk quality standards, producers must adopt production practices that reduce mastitis and reduce bacterial contamination of bulk tank milk. Use of effective management strategies to minimize contamination of raw milk and proven mastitis control strategies will help dairy producers achieve these important goals.