Over the last few years, my colleagues in the Food Animal Production Medicine group at the University of Wisconsin-Madison have used our clinical experiences troubleshooting fresh cow health problems on farms, research conducted by other groups, and our own research findings to formulate a plan for designing transition cow barns which results in optimal health and performance. In this article, I will summarize the planning process we have devised and used successfully to create these new facilities.

The planning process starts with one simple question:

“How am I going to manage my cows at the point of calving?”

In order to limit the risk for dystocia and stillbirth and avoid movement and social upheaval within the critical period of two to seven days before calving, there are only two possible strategies:

Each strategy has some advantages and disadvantages laid out in the table below that should be discussed before continuing with the plan.

Each strategy has different keys for success.

For the just-in-time-calving approach, the keys to success are:

Figure 1. An ideal maternity pen layout, with a concrete apron against the feed bunk in the foreground, a bedded area with sand and straw on top in the rear half of the pen, and a head gate in the far corner. The water trough is located in the near right corner, away from the bedded area.


For the socially stable prefresh/calving group pen, the following is required: 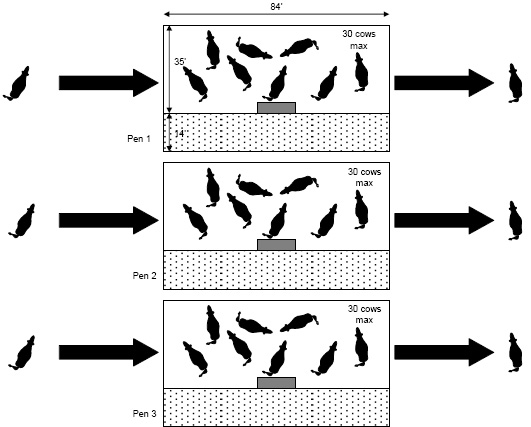 Figure 2. A series of bedded pack prefresh pens designed for a 1,000-cow dairy. Each pen provides 2,940 square feet of bedded area, with a maximum stocking rate of 30 cows per pen. A total of three pens provide capacity to cope with 140% of the weekly average calving rate, with a three-week pen stay duration. Pens are filled in series – filling pen 1 first to a maximum of 30 cows, then pen 2, and so on. Once the maximum stocking density is reached, no new cows are added. Cows may calve in the pen or in an adjacent calving pen and proceed to the postfresh group. Once the pen is empty, it is cleaned out and re-bedded, and the filling cycle repeats.


Once a decision has been made on a strategy for managing the cow at calving time, the planning process can proceed in five easy steps:

The actual duration of stay within any given transition cow pen (which includes the far-dry, prefresh, maternity, calving, colostrum, and postfresh management groups) is determined by two factors: the rate of calving and the target duration of stay in the pen.

Recommendations for pen sizes are typically based on the average flow of cows through the transition facility and do not take into account farm management decisions which vary time spent in the pen. For that reason, many transition cow pens are built that fail to accommodate the normal ebb and flow of calving rate over time. We recommend that a facility would be best constructed to accommodate the surges in calving rate, without compromise to stocking density within the pen. In essence, we will be overbuilding to some degree.

We have constructed a plan for sizing transition cow pens that allows us to accommodate cows in pens sized to cope with the normal increase in stocking density for 90% of the time. For five weeks a year (10% of the time), the farm will need to modify days spent in the pen to maintain the targets for stocking rate, or disease screening will need to compensate for a lapse in prevention. The procedure is as follows:

1. Calculate the weekly rate of freshenings for the herd.

For herds that are remodeling, we can graph this in programs like DC305 and file out the data into Excel. For new herds, we can estimate the number of calvings to be 104% of the rolling average number of cows in the herd, and the weekly rate will be this number divided by 52.

For example, a 1,000-cow dairy will freshen 20 cows and heifers per week on average.

2. Calculate the 90th percentile of the weekly calving rate. 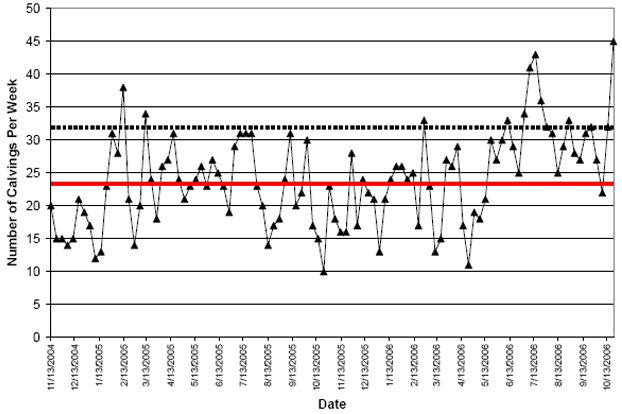 3. Determine the target duration of stay in each transition cow pen.

Factors such as target dry days, time of return of heifers to the close-up or far-dry pens, days in prefresh, time in the calving or maternity pen, and days in postfresh need to be decided. These are management decisions that will be farm dependent.

4. Calculate the number of cows in each group.

We have brought these ideas together in a pen size calculator for use on farm.

The calculator is shown below for a 1,000-cow dairy with a 60-day dry period and 21 days spent in the prefresh and postfresh pens.

Once we know the inventory in each group that we need to build for, we can proceed with the rest of the building design.

Using the above requirements, we know from the predicted inventory how many cows are in each pen, and we can calculate the feed bunk length of each pen knowing that we need to provide 30 inches of bunk space per cow in the prefresh and postfresh pens and 24 inches in the far-dry pen.

For ease of cow identification, head to tail is preferred for farms where pen workers need to check cows for signs of labor every hour. Pens of around 30 stalls split with a 26-foot crossover with a water trough in the middle provide flexibility to cope with changing numbers of cows in each group over time.

This will depend on the answer to the first question regarding whether just-in-time-calving will be used or a prefresh/calving pen. Different solutions have been found for different farms.

For example, the farm in Figure 4 opted for just-in-time-calving in individual calving pens. In this strategy, the prefresh pen is loaded with cows once a week in order to reduce social turmoil in the last week before calving. 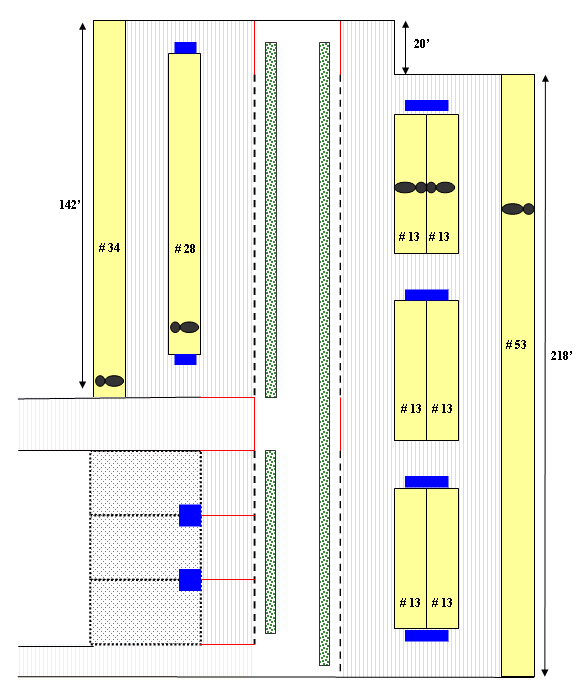 Figure 4. Once weekly loading of two-row head to tail prefresh pen in an 800-cow dairy with individual calving pens and a three-row far-dry pen.


In the farm shown in Figure 5, while they retained individual calving pens, they decided to create socially stable mature cow pens throughout the dry period with the provision of 5 x 25 cow pens. The pens are loaded at dry off, locked at 25 cows maximum, and allowed to empty before refilling. Heifers are managed in a separate group pen. 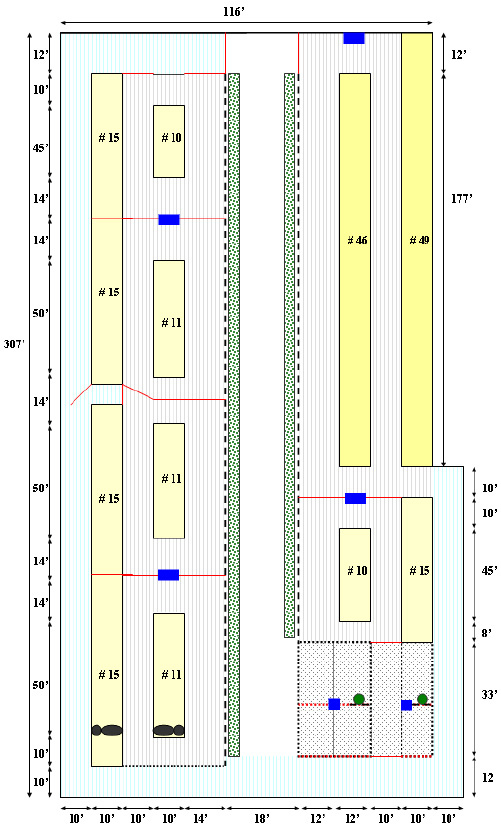 Finally, the farm in Figure 6 created socially stable bedded packs in which prefresh cattle calve where heifers may be grouped separately from cows. 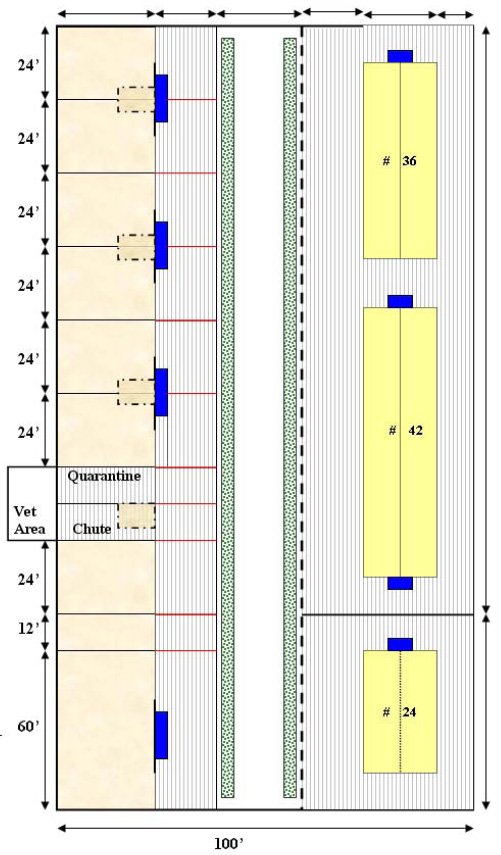 Sand is the optimal bedded surface for the dairy cow and provides cushion, traction, and support at the time when the cow most needs it. Prefresh cows are the heaviest, widest cows on the farm and require the largest stalls. Mature Holstein prefresh cows should have stalls at least 50 inches wide, preferably 52 to 54 inches. This creates problems in mixed-age groups with heifers grouped in the same prefresh pen. However, I believe it is foolish to punish two-thirds of the herd in order to make sure that the stalls are small enough for heifers to stay clean. Most farms choose to compromise with a 50-inch wide stall and remove manure from the rear of the stalls more frequently. Ideally, strategies that provide different size stalls for separate mature-cow (52 to 54 inches) and heifer groups (48 inches) can be utilized.

For prefresh cows and maternity cows, bedded packs should provide 120 square feet per cow minimum. Because the bedded area should not be deeper than 35 feet, this usually results in ample bunk space, and typically the area occupied by the pack is 15% larger than the area occupied by an equivalent freestall layout. Waterers should be located in the bedded area but shielded so that the cow must drink from the concrete feed alley side (Figure 7). 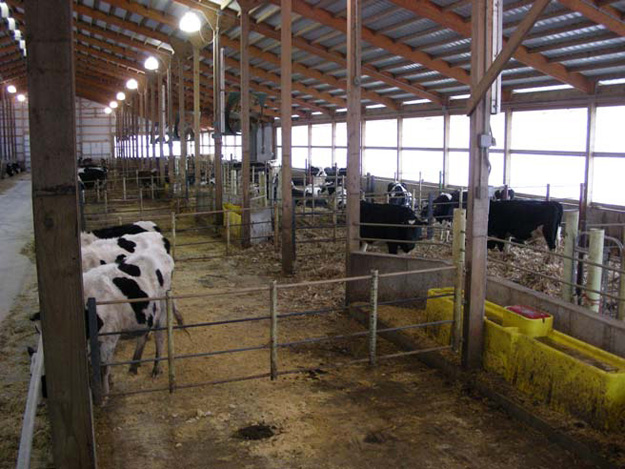 Prefresh cows decrease lying times by around 3 h/d in the last week before calving compared to far-dry cows. At this time, they do not need to be competing for a stall, so we recommend at least one stall per cow throughout the transition period.

For us to convince the farm (or the banker) to build this barn, you would need to believe that a facility built to accommodate 90% of the ebb and flow of calving rates would provide 1,337 lb more milk per cow than a facility that is overstocked 50% of the time, to pay back the extra cost in one year. Of course, the deal is even better than that, because we can pay off the barn over five years, making the required increase in milk only 280 lb per cow.

We have the opinion that when it comes to transition cows, you either pay at the beginning – to build the facility that encourages health and productivity, or you pay at the end, with broken cows and elevated culling rates. The choice is easy from our perspective and that of many Wisconsin dairy farmers who have already acted on our recommendations.

Nigel B. Cook
University of Wisconsin-Madison,
School of Veterinary Medicine