The Natural Resources Conservation Service has adopted a practice standard called Feed Management (592) and is defined as “managing the quantity of available nutrients fed to livestock and poultry for their intended purpose”. The national version of the practice standard can be found in a companion fact sheet entitled “An Introduction to Natural Resources Feed Management Practice Standard 592”. Please check in your own state for a state-specific version of the standard.

We (Schwab et al., 2003) modified the NRC (2001) TDNmaintenance summative energy equation for corn silage to include starch and non-starch NF C components with a variable predicted starch digestibility coefficient, and a direct laboratory measure of the NDF digestibility coefficient rather
energy value was derived from TDNmaintenance using the NRC (1989) empirical equation in MILK2000 (Schwab et al., 2003). In MILK2006, the NEL-3x energy value is derived using an adaptation of the TDN-DE-ME-NE conversion equations provided in NRC (2001).

In MILK2000, variation in IVNDFD impacts NEL intake through effects on both NEL-3x content and DMI (Schwab et al., 2003). However, Tine et al. (2001) and Oba and Allen (1999a) reported that at production levels of intake, IVNDFD has minimal impact on NEL-3x content but impacts NEL intake primarily through effects on DMI. In MILK2006, the IVNDFD value used for calculating NEL-3x is adjusted for differences in DMI predicted from IVNDFD using an equation adapted from Oba and Allen (1999a). Thus, IVNDFD impacts NEL intake and hence the milk per ton quality index mainly through its impact on predicted DMI in MILK2006.

Non-fiber Carbohydrates and Their Digestibility

Dairy cattle nutritionists have long used non-fiber carbohydrate (NFC) as a quasi-nutrient rather than starch specifically. However, NFC is a calculated value (100-NDF-CP+NDFCP-Fat-Ash; NRC, 2001) comprised of varying proportions of starch, sugar, soluble fiber, and organic acids, and is subject to errors associated with analyzing the five nutrients used to calculate NFC. Although the NRC 2001 summative energy equation was based on NFC, starch rather than NFC is being used in summative energy equations (Schwab et al., 2003) by many commercial feed testing laboratories especially for corn silage which they have long been analyzing for starch content and have developed NIRS calibrations for starch determination. However, determining digestion coefficients for starch to use in summative energy equations has been difficult. The NRC 2001 model uses an NFC true digestibility coefficient of 98% and arbitrary processing adjustment factors. The MILK2000 model uses a non-starch NFC (NFC minus starch) true digestibility coefficient of 98% (NRC, 2001) and varies the starch true digestibility coefficient from a minimum of 76% (Firkins et al., 2001) to a maximum of 98% (NRC, 2001) using whole-plant DM and kernel processing as regression equation variables to predict apparent total tract starch digestibility (Schwab et al., 2003). Both approaches though are limited in their ability for detecting potential variation in starch digestibility across a wide array of samples, and novel lab assays are needed.

In an attempt to address variation in starch digestibility, NRC (2001) suggested empirical processing adjustment factors (PAF) to adjust NFC digestion coefficients for high-starch feeds. However, since no system to measure variation in PAF for feedstuffs is available the PAF’s are subjective book values with minimal practical utility. For corn silage, U.S. Dairy Forage Research Center workers developed a kernel processing score (KPS; Ferreira and Mertens, 2005; Mertens, 2005) to assess adequacy of kernel processing in corn silage. But, the relationship between KPS values and in vivo starch digestibility measurements is not well defined. Ruminal in-vitro or in-situ degradation, either alone or in combination with in vitro post-ruminal enzymatic digestion of the ruminal residues, have been explored by some groups (Sapienza, 2002). Some commercial laboratories are attempting to employ in situ or in vitro systems to evaluate starch digestibility, but to date methods are highly variable between laboratories. Regardless of the method it is doubtful that samples can be fine ground as fine grinding of samples may mask differences among samples (Doggett et al., 1998). Relationships between in situ/in vitro measurements and in vivo starch digestibility are often not well defined. We recently developed an enzymatic lab assay, Degree of Starch Access (DSA), which is sensitive to differences in particle size, moisture content, and vitreousness of corn-based feeds (Blasel et al., 2006).

The DSA assay was found to be quite sensitive (Blasel et al., 2006) to particle size (R2 = 0.99) and moderately sensitive to DM content (R2 = 0.76) and endosperm type (R2 = 0.59), which are three primary factors that influence starch digestibility in corn grain. However, The DSA assay is a laboratory starch recovery procedure that does not result in a direct estimate of starch digestibility and only reveals differences in starch recoveries. For example, the DSA procedure would recover 95 percent of the starch in finely ground corn but only 5 percent of the starch in whole shelled corn. Thus, the DSA values provide an index of the variation in degree of starch access among feeds. We (Shaver and Hoffman, 2006) reviewed eight trials in the scientific literature (Taylor and Allen, 2005a; Remond et al., 2004; Oba and Allen, 2003; Crocker et al., 1998; Knowlton et al., 1998; Yu et al., 1998; Joy et al., 1997; Knowlton et al., 1996) with lactating dairy cows that reported total tract starch digestibility and particle size, moisture content, and endosperm type of the corns tested. From these data, we estimated their DSA values and evaluated the relationship between DSA and their measures of total tract starch digestibility. The resultant regression equation is applied to starch recovery values generated from the DSA assay to provide an estimate of total tract starch digestibility (termed Starch DigestibilityDSA; Shaver and Hoffman, 2006) which can be used in summative energy equations (Schwab et al., 2003; NRC, 2001) directly to calculate energy values for corn-based feeds on a standardized basis.

Fiber and Its Digestibility

The NRC (2001) summative energy equation is based on fiber digestibility calculated using lignin. Whole-plant lignin content was found to have a strong negative relationship with IVNDFD within comparisons of brown midrib (bm3) hybrids to isogenic counterparts (Oba and Allen, 1999b). However, stover NDF and lignin contents increase while NDFD decreases with progressive maturity, but whole-plant NDF and lignin contents are constant or decline as grain proportion increases (Russell et al., 1992; Hunt et al., 1989). This may partially explain why for 534 corn silage samples, NDFD calculated using lignin according to NRC (2001) accounted for only 14% (P < 0.001) of IVNDFD variation (Schwab and Shaver, unpublished). Michigan State workers (Oba and Allen, 2005; Allen and Oba, 1996; M. S. Allen, personal communication, 2003 Tri-State Nutr. Conf. Pre-Symp.) reported that lignin (% of NDF) explained only half or less of the variation for corn silage IVNDFD. These observations coupled with the NRC (2001) suggestion that IVNDFD measurements could be used directly in the NRC model led us to implement IVNDFD rather than lignin-calculated NDF digestibility in the corn silage milk per ton models (Schwab et al., 2003). Use of NDF and IVNDFD in the corn silage milk per ton models has been discussed above.

Values for TDNmaintenance, NEL-3x, and milk per ton calculated using MILK2006 and MILK2000 across a wide range of whole-plant corn IVNDFD values and extreme quality differences are presented in Tables 1 and 2, respectively. The TDNmaintenance differences between MILK2006 and MILK2000 are minimal. The NEL-3x and milk per ton values are lower and the range in these values is compressed for MILK2006 relative to MILK2000 according to the equation differences between the two models that were described above.

While these observations with MILK2006 are encouraging, more model validations relative to in vivo data are needed. The MILK2006 Excel Workbook can be downloaded at the University of Wisconsin’s Extension website. 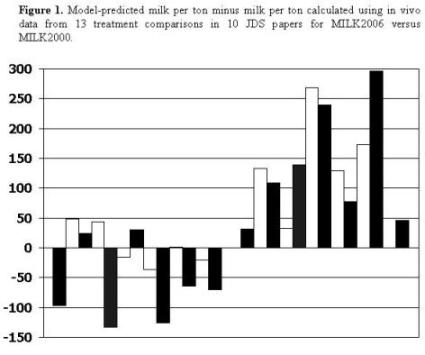 This fact sheet reflects the best available information on the topic as of the publication date. Date 5-25-2007