Reducing thermal stress to increase milk production and reproduction during the summer months is a key issue in dairy production. Many studies have documented the negative effects of heat stress (Armstrong, 1994, Collier et al., 1982, Ravagnolo et al., 2000 and Ray et al. 1992). Igono and others (1992) proposed that the Temperature Humidity Index (THI) could be used to evaluate the thermal stress of the environment. This index combines relative humidity and temperature into a single value to estimate the potential environmental heat load. An environment is generally considered stressful for cattle when the THI exceeds 72. Hahn (et al., 1992) showed that feed intake of cattle was reduced when temperatures exceed 75°F.

Lactating dairy cattle produce large amounts of heat due to digestion and metabolic processes, and this heat must be exchanged with the environment to maintain normal body temperature. Cattle exchange heat through the mechanisms of convection, conduction, evaporation, and radiation. Cattle can either give or receive heat energy from the environment. Solar radiation increases heat load by increasing the surface temperature of cattle. Air temperature above the normal body temperature of cattle also increases the heat load. In addition to increasing heat load, heat exchange at the body surface is reduced. Protection from solar radiation by providing adequate shade is the first step in reducing heat stress in dairy cattle.

The effects of heat stress and mechanics of heat exchange were extensively studied at the Missouri experiment station in the 1940s and 1950s (Kibler and Brody, 1949, 1950, 1952, and 1954). Studies showed that at temperatures above 70°F, heat loss was primarily due to moisture evaporation from the skin and lungs. As temperatures exceeded 90°F, more than 85% of the total heat dissipation was due to vaporization of water from the body surface and lungs. Brody and others (1954) suggested that at a temperature of 95°F, wetting the hair and skin greatly increased heat dissipation due to the hair increasing the surface area available for water vaporization.

Sprinkling or soaking and supplemental airflow to reduce heat stress has been evaluated in many studies. Researchers in Louisiana conducted several experiments in the late 1940s to determine the effects of sprinkling, shade, and supplemental air movement to cool dairy cows (Seath and Miller 1947 and 1948). They reported that sprinkling cows prior to entering shade reduced respiration rates by 65 to 81% and body temperatures by 46 to 59% over shade alone. They also found that using sprinkling in combination with supplemental airflow resulted in a rapid change in body temperature and respiration rate was superior to either a fan or sprinkling alone.

In several studies conducted by Kansas State University (Brouk, et al., 2004a, Brouk, et al., 2004b, Brouk, et al., 2003b), increasing airflow and soaking frequency has reduced respiration rates, body temperature, and body surface temperature of heat stressed dairy cattle. These studies have clearly shown that soaking the hair of cattle once every 5 minutes in association with 6 to 8 mph airflow reduced respiration rates by 50% after one and a half hours of treatment. Both low-pressure and high-pressure systems that soak the skin have been shown to be more effective than high-pressure systems that only reduce air temperature (Brouk, et al., 2004b). These studies have shown that soaking the skin with 0.25 to 0.30 gal of water within 1 to 1.5 min, followed by 3.5 to 4 min of drying time was most effective.

Soaking and then evaporating water from the surface of cattle represents the most efficient method to remove heat from cattle. However, when environmental temperature exceeds cow body temperature, evaporative cooling of the air may be necessary. Air conditioning would be the most effective by reducing air temperature and relative humidity. However, due to energy cost and system maintenance issues, it is not considered as a practical solution on commercial dairies.

A possible solution is evaporation of water into air as it enters the cow facility. Combinations of tunnel ventilation and evaporative cooling have been used in swine and poultry operations for many years to cool the environment. Recently, these systems have been installed in some Midwest dairy facilities. Huhnke (et al., 2001) reported that evaporative cooling could reduce the total hours of higher levels of THI in some environments. Evaporative cooling has been used very successfully to cool dairy cattle in hot arid climates. Under arid conditions and high environmental temperatures, the potential to reduce temperature and THI is improved. However, as relative humidity increases and or temperature decreases, effectiveness of evaporative cooling to modify the environment decreases. As relative humidity increases above 70%, the potential reduction in THI is less than 10%.

Studies by K-State Dairy Team (Brouk, et al., 2001 and Brouk, et al., 2003a) have indicated that design flaws have resulted in facilities that did not effectively modify the environment. In several cases, facilities that were equipped with modified evaporative cooling systems resulted in higher THI conditions in the barn than outside the facility. Lack of adequate ventilation and efficiency of water evaporation were the primary causes. One limitation of conventionally designed free-stall barns is the large cross-sectional area of the building resulting in greater ventilation rates to maintain airflow at 7 to 8 mph. However, when correct design criteria were followed (Brouk, et al., 2002), tunnel ventilated tie-stall barns equipped with evaporative cooling pads reduced afternoon respiration rates and body temperatures as compared to barns that were only tunnel ventilated. Although afternoon barn temperatures were reduced by up to 8.25ºF, relative humidity increased by up to 30% in the barns equipped with evaporative cooling pads. However, the decrease in temperature was great enough to overcome the increase in the relative humidity resulting in a decrease in THI.

Combining evaporative cooling, tunnel ventilation, and skin soaking in high-humidity environments has been the focus of several recent studies. Researchers from K-State and Arizona have evaluated these systems on commercial dairies in Florida and Thailand. In Florida, two 700-ft, four-row dairy barns were equipped with tunnel ventilation with fans on the south end and fully open on the north end. The sidewall height was 11 ft 8 in and the peak height was 13 ft 4 in with a 1/12-pitch roof. Curtain sidewalls were closed during the cooling study. One barn was equipped with a high-pressure fogging system that operated when the temperature exceeded 80ºF from 11 a.m. to 10 p.m. and when above 83ºF from 10 p.m. to 11 a.m. Barn temperatures (Figure 1) were lower and relative humidity higher (Figure 2) during the afternoon hours for the evaporative cooled barn. Similar temperature and relative humidity were observed for the tunnel ventilated barn and ambient conditions. THI was lowered during the afternoon hours with evaporative cooling (Figure 3). In a switchback design, feed line soaking systems were tested in the barn with the evaporative cooling. Eight healthy, high-producing animals were selected from each pen, and a vaginal temperature probe was inserted into each animal. Treatments were: soaking in the afternoon and at night (10 a.m. to 6 a.m. the following morning – afternoon & night) or just at night (10 p.m. to 6 a.m. the following morning – night). The feed line soaking system was activated when the barn temperature exceeded 72ºF and the system soaked for 1.6 min (followed by 4.8 min off). Approximately 0.30 gal of water was applied to the cow’s standing area in each feeding space per soaking. Respiration rates of the cattle fitted with the vaginal probes were observed and recorded at 4 p.m., 10 p.m. and 6 a.m. of each study day. Respiration rates were reduced during the afternoon and at night when cattle were provided feed line soaking in addition to tunnel ventilation and evaporative cooling (Figure 4). 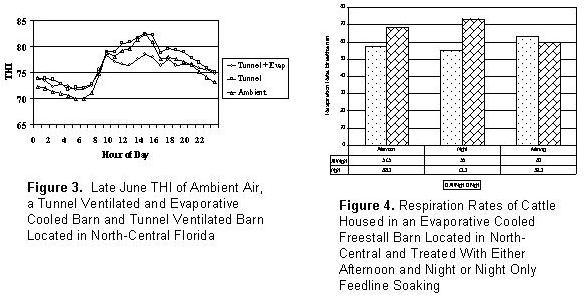 However, morning respiration rates did not differ between the two treatments. The average respiration rates were 8 breaths/min less for the cows soaked both afternoon and night. In areas with high night and early morning relative humidity, evaporative cooling may be effective during the afternoon hours if the humidity drops as ambient temperature increases. Vaginal temperature (Figure 5) was less during the evening hours when cattle were soaked both during the afternoon and at night. The effect of heat buildup during the early evening hours seen in the cattle soaked only at night is a typical response of cattle to an ineffective cooling system. In this situation, ambient relative dropped to just above 70%, allowing an effective evaporative cooling system to lower the temperature almost 10 degrees as compared to ambient. Additional cooling was accomplished with the feed line soakers, and the benefits were greatest when the system operated both day and night. 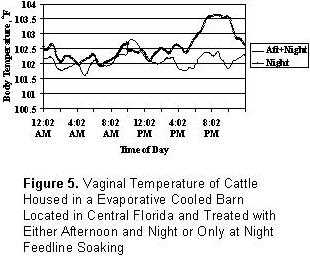 Hillman, P.E., K.G. Gebremedhin, A. Parkhurst, J. Fquay and S. Willard. 2001. Evaporative and convective cooling of cows in a hot and humid environment. Pages 343-350 in Livestock and Environment VI: Proceedings of the 6th International Symposium May 21-23, 2001, Louisville, KY. ASAE.