Biotin is a B-complex vitamin that is essential for cattle. However, for several decades very little research was published on the effects of biotin in cattle. This lack of interest was probably caused by the inability to produce clinical biotin deficiencies in functioning ruminants and by the consensus that adequate biotin was in normal feedstuffs or was synthesized by bacteria in the rumen and lower intestines. In the last few years, renewed interest in the effects of supplemental biotin for cattle has developed. Most of the recent research has centered on the effects of biotin on hoof health of dairy cows (Bergsten et al., 1999; Fitzgerald et al., 2000; Midla et al., 1998). All these studies reported a positive response on some measure of hoof health to supplemental biotin. Biotin, however, is involved in many metabolic pathways directly involved with milk synthesis. Because of the ever increasing productivity of dairy cows, the effects of supplemental biotin on milk production and metabolism of dairy cows should be studied.

This topic will only be discussed briefly; a more thorough discussion can be found in Weiss and Zimmerly (2000). Biotin is involved in pathways for amino acid metabolism, cellular respiration, gluconeogensis, and fatty acid synthesis. Four enzymes require biotin as a cofactor: acetyl-CoA carboxylase, pyruvate carboxylase, B-methylcrotonyl-CoA carboxylase, and propionyl-CoA carboxylase. Biotin is covalently linked to each of these enzymes and transfers a carbon unit from the substrate to the product. An overview of the pathways that involve biotin-containing enzymes is shown in Figure 1. 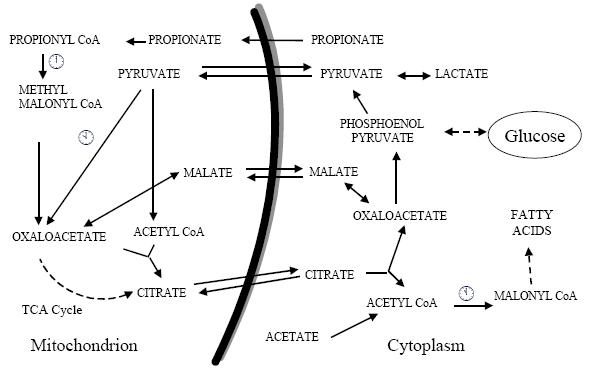 The other two biotin-containing enzymes (B-methylcrotonyl-CoA carboxylase and propionyl-CoA carboxylase) are less tightly regulated and respond to differences in biotin status in humans and laboratory animals, suggesting that cattle may respond to biotin supplementation. B-methylcrotonyl-CoA carboxylase is an enzyme involved with breaking down the amino acid leucine into products that can be used as energy sources. When biotin is limiting in humans, other metabolites are produced and excreted in the urine (Mock, 1999). If the activity of this enzyme is limited by a marginal deficiency of biotin in cattle, a large response in production would not be expected when biotin is supplemented.

Propionyl-CoA carboxylase is an extremely important enzyme for ruminants but is relatively unimportant in nonruminants. This enzyme is involved with the pathway that converts propionate to glucose. In mice, the activity of this enzyme is reduced when biotin is clinically deficient (Mock, 1999). In rats fed a low biotin diet, but without clinical signs of biotin deficiency, activity of propionyl-CoA carboxylase appeared to be reduced (Kramer et al., 1984). Propionate is a minor metabolite in nonruminants but is the major glucose precursor in ruminants. Lactating cows must synthesize large amounts of glucose from propionate and if the activity of propionyl-CoA carboxylase is limited by biotin availability, a response to supplemental biotin in glucose production and milk production is possible. The effects of supplemental biotin on the activity of this enzyme in cattle have not been investigated.

Effects of Biotin on Rumen Metabolism

All the major cellulolytic bacteria in the rumen require biotin for growth (Baldwin and Allison, 1983). In two studies (Bentley et al., 1954; Milligan et al., 1967), supplemental biotin increased fiber digestion in vitro. Bacteria also require biotin to produce propionate. Propionate production by mixed ruminal bacteria was reduced in vitro when biotin was not included in the culture media. These data suggest that supplemental dietary biotin may alter ruminal metabolism and result in either increased fiber digestion (result in higher energy values of feeds) or in increased propionate production which could increase glucose production by the cow.

Bacteria in the rumen and large intestine can synthesize biotin that can then be absorbed by the cow. However, data on the quantity of biotin synthesized by ruminants are extremely limited and variable. No data are available with lactating dairy cows. In studies with steers (Miller et al., 1986; Zinn et al., 1987) at low dry matter intakes (less than 6 kg/d) or in nonlactating cows consuming approximately 15 kg of hay dry matter (Frigg et al., 1992), estimates of ruminal synthesis of biotin ranged from 0 to 2 mg/day (approximately 0.8 mg/kg of digestible organic matter intake). If those values are appropriate for lactating dairy cows, a typical cow consuming 20 kg of dry matter/day would synthesize 0 to 10 mg of biotin each day. Ruminal synthesis rate of biotin might be related to the diet. An in vitro study reported that biotin synthesis was reduced as the concentration of dietary forage was reduced (Da Costa Gomez et al., 1998). In that study, biotin synthesis was reduced by about 50% when the in vitro substrate was 50% forage and 50% concentrate compared to an in vitro diet with about 80% forage. A study with duodenally cannulated steers, however, reported no difference in biotin flow to the small intestine when steers were fed diets with 90% corn grain or 70% alfalfa meal (Miller et al., 1986). If higher concentrate diets do indeed reduce ruminal biotin synthesis, then supply of biotin may be reduced when higher concentrate diets are fed to dairy cows. This could be a reason why positive responses to supplemented biotin are often observed in recent experiments but were not observed in earlier research when cows were fed high-forage diets.

During the last few years, several studies have been published on the effects of supplemental biotin on lactating dairy cows (Bergsten et al., 1999; Fitzgerald et al., 2000; Midla et al., 1998; Zimmerly and Weiss, 2001). Most of these experiments were designed to determine the effect biotin has on hoof health. Because of the large number of animals needed for hoof health studies, most of these experiments are conducted on commercial herds. Actual milk yield or intake data on individual cows are usually not obtained from this type of study, and the possibility of confounding between pen and treatment effects are possible. Two of the three field studies reported increased milk production when supplemental biotin was fed (Table 2). The two positive studies used cows with high milk production (approximately 10,000 kg/305 days). The study that did not show increased milk production with supplemental biotin used low-producing cows (approximately 5,800 kg/305 days). That study was also conducted with grazing cattle, but the two positive studies used cows housed in confinement and fed silage and hay-based diets.

Because the field trial data and the biochemistry of biotin suggest that supplemental biotin might increase milk production, we (Zimmerly and Weiss, 2001) conducted a controlled study with lactating cows. At approximately 14 days before calving, cows were fed 0, 10, or 20 mg of supplemental biotin per day. The experiment continued until 100 days of lactation. The diets were identical among treatments except for the supplemental biotin and contained approximately 24% alfalfa silage, 22% corn silage, 4% alfalfa hay, 29% ground corn, 10% soybean meal, 6% heat-treated soybeans, and 5% other protein sources, minerals, and vitamins.

Dry matter intake was not affected by treatment, but milk production increased linearly (P<0.05) with increasing biotin (Table 3). Milk composition was not affected by treatment, but milk true protein yield (g/day) increased linearly with increasing supplemental biotin. The milk production response to supplemental biotin was observed by the first week of lactation and was maintained during the 100-day trial (Figure 2). Measures of energy balance and rumen metabolism were not affected by treatment. These data suggest that the response to supplemental biotin was not caused by increased energy availability but rather to a repartitioning of nutrients to milk. This suggests, but does not prove, that biotin may affect glucose production by lactating dairy cows. 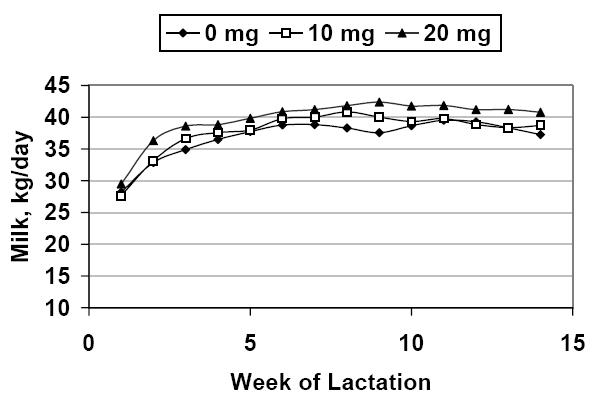 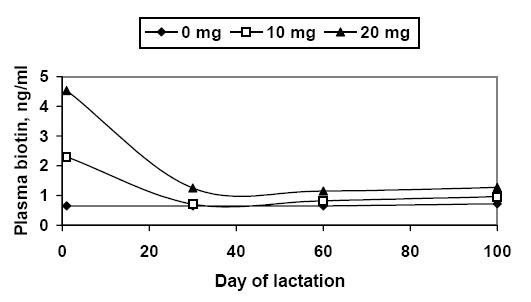 Figure 3a. Concentrations of biotin in plasma of lactating cows fed different amounts of supplemental biotin (Zimmerly and Weiss, 2001). 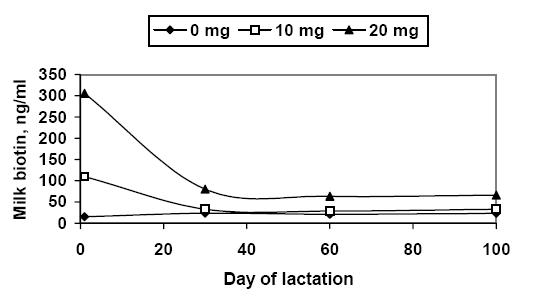 Figure 3b. Concentrations of biotin in milk from cows fed different amounts of supplemental biotin (Zimmerly and Weiss, 2001).