The first part of this paper looks at the investment value of inseminating females with semen from service sires with different genetic merits, sire conception rates (SCR), and prices. These aspects were chosen because prices are an upfront investment cost, SCR affects the ability to get the female pregnant from the semen, and the genetic merit is expected to be expressed in the calf that will be born if the insemination is successful.

The third part is a brief comparison of the value of genomic testing of heifer calves with the value of purchasing semen from sires with greater genetic merit and SCR. Our analyses are aimed at dairy producers who sell cull animals for beef but not breeding stock. We will also limit the discussion to heifer calves and assume that the value of a bull calf is not affected by his sire.

Animals have genetic merits for different traits of economic importance such as milk production, daughter pregnancy rate, productive life, somatic cell score, and udder composite. The genetic merits of multiple traits can be combined in a selection index, such as lifetime net merit (NM$) calculated by USDA-AIPL (Cole et al., 2010). It combines production, fertility, health, and type traits in an optimal way. The NM$ is an estimate of the expected lifetime profit of a female compared to the breed base. The breed base animal, an average cow born in 2005, has a NM$ of $0. Lifetime is about three years after first calving. A sire with a predicted transmitting ability (PTA) for NM$ of $400 is expected to have daughters that are on average $300 more profitable than a sire with a PTA NM$ of $100.

The economic weights of the traits are the marginal effects of a change of one unit of each trait on profitability (Table 1). The alternative selection indices Cheese Merit (CM$) and Fluid Merit (FM$) have different weight for the traits protein, fat, milk, and somatic cell score and can be more appropriate in markets where milk is sold primarily for cheese  production or fluid consumption. We focused on NM$. The August 2011 genetic evaluation of 605 active Holstein or Red and White sires run by USDA-AIPL showed that the median sire had a NM$ of $273. The top 5% of sires had NM$ greater than $543, and the bottom 5% had a NM$ less than -$68. Thus, there is quite a bit of variation in the expected lifetime profitability of daughters of active AI sires.

One aspect of an investment decision in semen is the expected lifetime profitability of a daughter, but other factors must be considered as well. In the 1970s and 1980s, many studies were published that evaluated net returns from semen purchases of genetically superior sires (e.g., Everett, 1975; McGilliard, 1978; Rogers, 1990). Many different formulas exist, but they essentially consider:

Gene flow is the concept that the genetic merit of the calf is actually going to be expressed in herself and her offspring. This depends on the probability of survival as a heifer and the number of female offspring she is expected to produce. Only half of the genetic merit of an animal is passed on to the next generation. Females can have several female calves, depending on whether sexed semen is used, cull rates, etc. Discounting of cash flows must be applied because revenues and costs occur in the future. We assumed a 5% annual interest rate. We then calculated the combined gene flow and discounting to be 1.36. 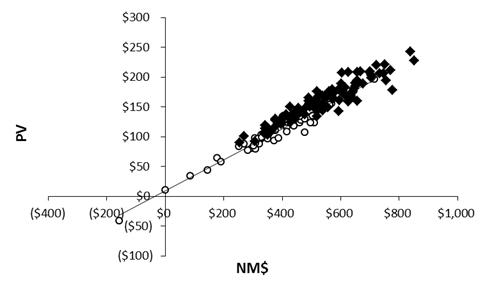 Figure 2 is a plot of the published semen retail prices and the NPV of the semen for the two AI companies. The net present value (NPV) is the PV minus the semen cost. Figure 3 is the same plot with semen prices set to one-third of the retail price because most dairy producers pay less than the full retail price. There is a clear difference between companies concerning the relationship between their published retail price and the NPV of the semen they sell. The overall correlation between NPV and semen price is only 0.16, where it is 0.57 for one company and 0.34 for the other company. 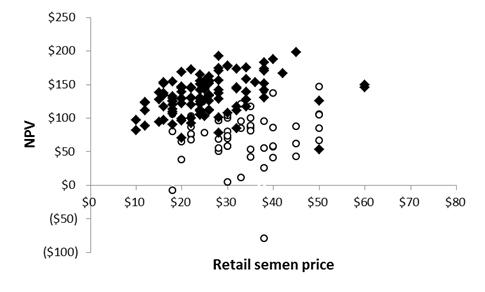 Figure 2. Retail semen price and net present value (NPV) for 166 sires with sire conception rate and price information. Data from the August 2011 sire evaluation run and published retail prices of September 2011 from two AI companies. NPV above $0 implies that it is profitable for a dairy producer to purchase semen from that sire. 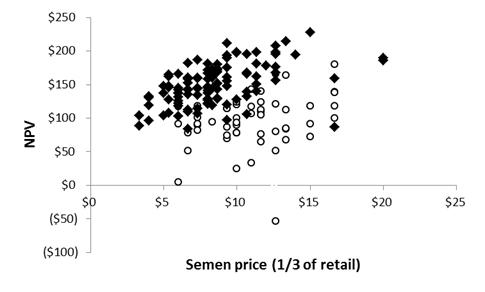 Figure 3. Semen price and net present value (NPV) for 166 sires with sire conception rate and price information. Data from the August 2011 sire evaluation run and published retail prices of September 2011 from two AI companies. Most dairy producers pay less than the full retail price. Therefore, the semen price was set to one-third of the retail price. NPV above $0 implies that it is profitable for a dairy producer to purchase semen from that sire. 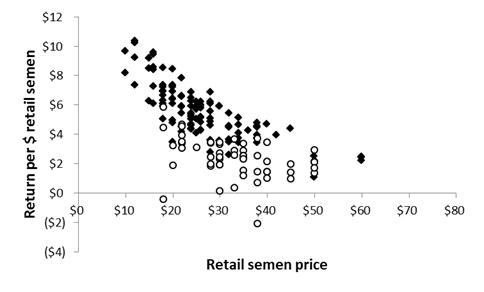 Genomic testing is useful, among other things, for better ranking calves based on their genetic merit in order to select which calves to raise as replacements. Non-selected surplus calves can then be sold at an early age, avoiding investment in rearing costs that are difficult to recover. Because the increase in reproductive efficiency and the use of sexed semen is producing many heifer calves on many dairy farms, choosing which calves to raise based on their genetic merit, among other factors such as early life health events, has become a real option that now needs to be evaluated.

A complete economic evaluation of this scenario has many aspects. This includes all herd revenues and costs as a result of a reproductive program that produces more heifer calves (if any) than are needed to enter the herd as calving heifers. In addition, it includes the value of the increased genetic progress due to the ability to select among the available heifer calves, possibly enhanced by genomic testing.

The genetic progress from selection among heifer calves is dependent on three factors. First, genetic variation for a trait, measured by the standard deviation, must exist in the population from which the calves are selected. The standard deviation of the true breeding values for NM$ is approximately $350. Second, genetic progress depends on how accurately we can estimate the true breeding value of each calf. Accuracy may be defined as the square root of reliability. When full pedigree information about heifer calves is available, the reliability of the estimated breeding values is approximately 35%. A genomic test, such as the 3K test, can increase this reliability to approximately 65%. Greater reliability means a better ranking of the calves; therefore, we can better select the truly genetically best animals. This means greater genetic progress among the selected animals (and lower genetic values of the non-selected animals).

Table 3 shows this principle. For example, when 80% of heifer calves need to be selected, pre-ranking based on their Parent Averages with a reliability of 35% would give this group of heifer calves an estimated breeding value (EBV) of $72 (the average of all animals is $0). The 60th through the 90th percentile (30%) of the pre-ranked calves should be tested with a genomic test with reliability of 65% and cost of $45 per test. This increased the EBV of the newly selected calves to $93. The cost of testing per selected calf was $45 * 30% / 80% = $17. The NPV of the selected calves was $112. An average selected calf – and her future offspring – is expected to be $112 more profitable than an average calf before selection. The value of the 20% non-selected calves is not yet included.

Analysis of Value of Herd Reproductive Program Including Heifer Selection

Table 3 shows that the value of the selected calves increases when the selection intensity is greater. But to generate a surplus of calves, the dairy farm may need to use more sexed semen and/or improve its reproductive efficiency. Both may come at additional costs. We used a comprehensive dairy herd simulation model (v.dairyplan; De Vries, 2011) to illustrate how a dairy herd reproductive program could be combined with heifer calf selection to find the most profitable scenario. This model includes both young stock and adult cows. Numerous inputs such as mortality and involuntary culling risks, lactation curves, probabilities of conceptions, feed intakes, breeding values, and prices were combined to generate outputs such as revenues and costs per cow per year and number of heifer calves born.

Table 5 shows the value of selection among the heifer calves. Heifer calves can be pre-ranked, for example based on Parent Average, with a reliability of 35%. After the pre-ranking, an optimal genomic testing plan is applied with 65% reliability and at a cost of $45 per tested calf. The sexed semen scenario

The described scenarios are only illustrations. More issues need to be addressed. For example, maybe more cows should be culled when a large number of heifers are available. Further, if heifer calves are tested with a genomic test, then over time more and more cows will have EBV with a high reliability. This should have consequences for the insemination policy to generate heifer calves. For example, sexed semen could be used on the genetically superior females while simultaneously weighing the risk of getting the genetically superior females pregnant in time. How many surplus heifer calves should be created may depend on which females are chosen to be dams of the next generation. This decision problem may also have consequences for the choice of sires.

Genomic testing in the scenario without sexed semen created a return over investment of $48 / $9 = $5.37 (0% reliability of pre-ranking) or $9 / $4 = $1.82 (35% reliability of pre-ranking) to the profit per cow per year. In the sexed semen scenario, these returns on investment were $88 / $29 = $3.06 and $20 / $12 = $1.73, respectively. These returns need to be compared to the returns on investment of purchasing semen from more superior sires, as is shown in Figure 4. Sometimes it is more valuable to purchase semen from sires with greater genetic merit than it is to genomically test heifer calves. On the other hand, other benefits of genomic testing such as avoiding inbreeding have additional value.

Low-cost semen is attractive to producers, but the most profitable mate may not be the bull with the highest PTA for NM$. The semen with the highest NPV should be selected, unless economic weights of traits are valued quite differently. Genomic testing of the lowest-ranked calves based on their Parent Averages should be used to identify the poorest replacements in the herd, which should be sold, particularly when the rankings are based on genetic values with low reliabilities. Profit per cow is probably maximized when genomic testing is used in conjunction with sexed semen. It may be more valuable to purchase semen from sires with greater genetic merit than to genomically test heifer calves in some scenarios. It is not simple to find optimal insemination and selection policies. Improved on-farm tools are needed in order for dairy producers to take fullest economic advantage of these options.

De Vries, A., D.T. Galligan, and J.B. Cole. 2011. The use and economic value of the 3K SNP genomic test for calves on dairy farms. Florida Extension Publication AN270. Available at http://edis.ifas.ufl.edu/an270.