Over 35,000 robotic milking systems (RMS) units are operational on dairy farms around the world. The main reasons dairy producers install milking robots are to improve their lifestyle and to expand without hiring additional labor.

Milk production per cow, milk produced per robot per day, labor savings, and length of useful life are the main factors affecting RMS profitability. The primary disadvantage is the capital investment of $150,000 to $200,000 per robot that will milk 50 to70 cows each. Most historical data shows milking robots are less profitable than conventional milking systems. Advances in robotic technology, improved management skills, and higher labor costs may change these results.

USDA (2016) reports that wages paid to livestock workers increased 3% in 2014 and 4% in 2015. Reported RMS labor savings vary. Researchers have reported from no savings up to 29% savings with RMS. Barn design and management may explain much of this variation. Farm Management Records (Finbin, 2016) showed that Upper Midwest RMS farms averaged 2.2 million lb of milk per full time worker compared to 1.5 million lb for similar sized herds milking in parlors (Table 1). Our survey of 53 Minnesota and Wisconsin robot farms showed that even when total labor is similar, time saved from milking is used for activities, such as improving animal health, analyzing records, improving reproduction, and more timely forage harvest.

Bijl et al. (2007) compared the economic performance of Dutch farms using RMS to closely matched conventional farms milking 2X. Because of higher costs for the RMS, conventional farms were more profitable. However, the labor requirement was 29% lower on the RMS farms resulting in more milk production and income per worker. They concluded that investing in RMS allows farms to milk more cows and produce more milk with less labor.

We developed a web application to compare the profitability of robots and parlors: https://kotamine.shinyapps.io/RobotParlor/. This tool was used to compare the economics of RMS and parlor systems on farms with 120, 240 and 1,500 lactating cows over a 20-year pay-back time. Milking labor costs were set at $16/hr with a milk price of $17/cwt. We assumed milk production would increase 5 lb/day per cow with RMS compared to milking 2X and decrease 2 lb/day compared to 3X milking. The per cow barn investment is higher for the RMS, reflecting the additional cost to install labor savings features typical in RMS barns. We inflated labor costs at 1, 2, or 3% annually. Net annual impact refers to the net present value of projected differences in RMS cash flows converted to an annuity.

The primary reason for the differences in profit is the more intensive use of the milking system. The RMS assumed full utilization at 60 cows per robot across all herd sizes. The parlor was only being used four hours per day with the 120-cow system. In the 240-cow simulations, the parlor was being used 8 and 12 hr/day in the 2X and 3X respectively. For the 1,500-cow herd, both the robot and parlor were at near maximum utilization.

Milk production and labor assumptions between the systems greatly affect the profitability projections. More research is needed to understand the economics of how these systems perform with different herd sizes and management practices. 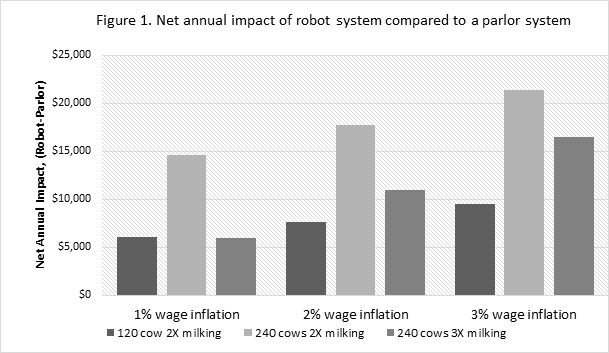 Breakeven milk production. We also examined how increased milk production per cow in RMS would affect the profit comparison (Figure 2). If the robot system achieves 3 lb /cow per day higher milk production than the parlor with 3% annual wage inflation, the annual income is only $3256 higher for the parlor. At 5 lb/day more milk, the RMS is more profitable at all wage inflation rates. Current research indicates that RMS do not achieve milk production as high as 3X milking, but as RMS management and facility design improves, this may change. Another potential advantage is that cows in RMS can be managed and milked in stable groups within the pens. Cows have access to resources (feed, water, beds, and milking) at all times. More precise feeding management can potentially increase milk per cow. 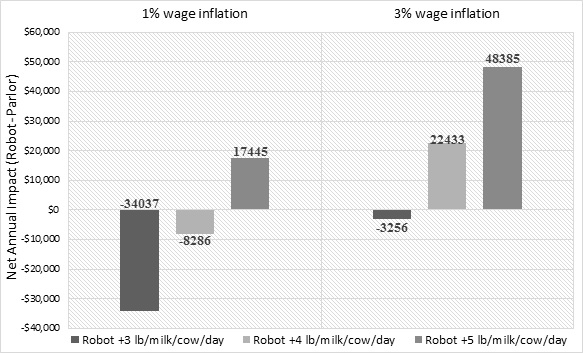 Maximizing daily milk per robot is important to maximize profit. In a four robot system using 2% annual wage inflation and a 20-year time horizon, net annual income increases approximately $4,100 for every 500 lb increase in daily milk per robot. Currently some US farms are consistently harvesting in excess of 6,000 lb of milk per robot daily. This is achieved by a combination of high daily milk per cow and a high number of cows per robot (often over 60). The most important factors to achieve this are:

We examined how the economic life, labor efficiency, and milk production change affects the profitability of RMS. We developed two scenarios using a 180-cow dairy: RMS replacing a parlor and retrofitted in an existing freestall barn and a RMS in combination with a new high technology freestall barn.

For the retrofit scenario, we assumed that there was no remaining debt with the previous parlor. The increases in costs with the robots were, payments for the 3 robots ($63,000) for 10 years, higher insurance ($2,700) and higher maintenance ($9,000/robot per year). We examined profitability using milking like labor of 45, 60 and 75 minutes per robot. We also varied daily milk per cow using a 2 lb decrease, no change and 2 lb increase compared to the previous system. Our survey of producers indicated that well designed (automatic manure removal and split entry pens), well managed free flow barns average about 45 minutes of daily milking like labor per robot. In this scenario, if producers can get 2 lb/day more milk and robots last longer than 10 years, the RMS system is more profitable than the parlor system. If there is no change in milk production, robots must last 13 (with 45 minutes of daily labor per robot) to 17 (with 75 minutes of daily labor per robot) years to breakeven. If milk production decreases 2 lb in the RMS system, it is never as profitable as the previous parlor system.

Robot with a New Barn

To achieve the maximum benefit of robots, it is preferable to design them into a new, high technology, low labor requirement facility. This includes various upgrades, such as wider more frequent crossovers, automated manure removal, and automated feed pushers. The projected new facility resulted in annual payments of about $101,000 over 20 years for the 180-cow farm. A 10 lb/ day increase in milk production along with the anticipated labor savings is required before robots are consistently more profitable than the previous parlor system.

Most previous simulations and observational studies have shown that RMS are not as profitable as parlors. Our understanding of robotic facility design, feeding, and management will continue to improve, resulting in decreased labor requirements and higher milk production of cows milked with robots. The main management factors affecting whether robots are more profitable than parlors are increased milk production per cow, labor wages and labor savings. Another major factor is years of economically useful life. For comparing the relative return of robots versus parlors, the producer needs to understand how their management ability and future wage inflation affect potential future net income.

Development of the web application for comparing the cost of different milking systems was funded by North Central Extension Risk Management Education Center competitive grant no. 2015-49200-24226 from the USDA National Institute of Food and Agriculture.