A rising concern with the application of dairy wastes to agricultural fields is the accumulation of copper (Cu) in the soil. Copper sulfate (CuSO4) from cattle footbaths is washed out of dairy barns and into wastewater lagoons. The addition of CuSO4 baths can increase Cu concentration significantly in manure slurry, from approximately 5.0 grams per 1,000 liters to 90.0 grams per 1,000 liters. The Cu-enriched dairy waste is then applied to agricultural crops, thus raising concerns about how soils and plants are impacted by these Cu additions.

Once added to the soil, the Cu+2 from CuSO4 can:

Typically, the majority of Cu strongly adsorbs to soil organic matter and clay surfaces. In fact, Cu binds to organic matter more strongly than any other micronutrient. Dairy manure is rich in organic matter and will naturally have greater Cu adsorption than dairy lagoon water which is low in organic matter. In soils with pH values greater than 7.0, soluble Cu+2 will react with water to form either Cu(OH)2 or associations with Fe-oxides. Thus, almost all Cu added to soil typically stays in soil. For more information regarding soil Cu reactions, read Copper Deficiency in Cereal Grains.

The potential for groundwater contamination, via enhance downward Cu transport, will be greater in sandy, acidic soils or under irrigated conditions. And although increasing soil organic matter content will increase Cu adsorption, Cu associated with dissolved organic phases could also be transported downward. However, most studies suggest that soluble Cu transported through soils does not exceed the national drinking water standard of 1.3 mg/L. For more information regarding Cu transport, read Kinetics of copper desorption from soils as affected by different organic ligands.

With the strong binding of soluble Cu to soils, very little of the applied Cu is plant-available. Overall, the potential for Cu toxicities in plants is relatively small given the amount of Cu that is added through dairy-waste application. Preliminary results from the USDA–ARS in Kimberly, Idaho, showed that extractable soil Cu concentrations ranging from 1 to 154 parts per million (ppm) in a calcareous soil had no effect on alfalfa or corn silage biomass yields, while plant survival was drastically impeded at concentrations greater than 323 ppm.

While these results are encouraging in the short-term, repeated applications of dairy manures could potentially raise Cu concentrations to levels toxic to plants, with very limited possibilities for remediation. A few fields in Idaho that have received frequent applications of lagoon water have shown evidence of Cu accumulation. Because Cu is so tightly bound by the soil, it is very difficult to remove. Succeeding crops can only remove 0.1 pound Cu per acre per year. As it stands now, if a grower waits until Cu plant toxicity symptoms occur (including plant death), they will continue to see Cu toxicities in that field for an indefinite period of time. 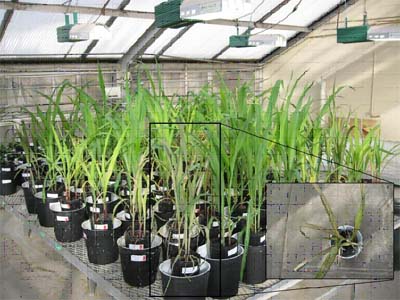 In terms of regulation, there is an existing EPA 503 “worst case scenario” standard that limits annual loading of Cu from biosolids to 66 pounds Cu per acre and limits lifetime loading to 1,339 pounds Cu per acre (limits are based on biosolids land application). For more information read Land Application of Biosolids. Reaching these limits is almost impossible with dairy waste applications, and would devastate most agricultural crops long before the lifetime loading limits were met. New York has set lower lifetime loading limits for Cu at 75 pounds per acre to avoid the potential of irreversible toxic accumulations of Cu in the soil. (For more information, see Table 5 in Composting Facilities.

While more studies are needed to develop an official threshold for Cu in alkaline Idaho soils, based on what we know thus far, it would be advisable to cease Cu additions to soils with greater than 50 ppm extractable Cu. This value is advisable for producers raising alfalfa for dairy cow consumption in order to avoid Cu accumulation above National Research Council recommendations. To determine if you currently have a Cu accumulation problem in your soil, or to identify a developing accumulation, request an analysis for diethylenetriaminepentaacetic acid (DTPA) extractable Cu every two to three years from an accredited soil testing laboratory.