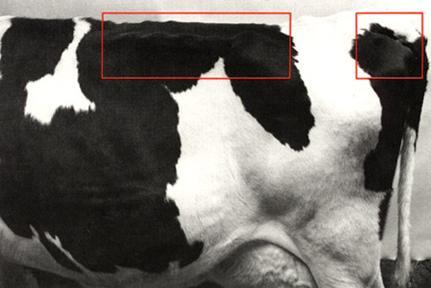 Body condition scoring is a method of evaluating fatness or thinness in cows according to a five-point scale and using the score to fine-tune dairy herd nutrition and health. Research and field experiments have shown that body condition influences productivity, reproduction, health, and longevity. Thinness or fatness can be a clue to underlying nutritional deficiencies, health problems, or improper herd management. If done on a regular basis, body condition scoring can be used to troubleshoot problems and improve the health and productivity of the dairy herd.

Over-conditioning, or fatness, may result from poor nutrition or reproduction management. A fat cow is more susceptible to metabolic problems and infections and is more likely to have difficulty at calving. Over-conditioning usually begins during the last three to four months of lactation, when milk production has decreased, but grain and total nutrient levels have not been reduced accordingly. Other causes of over-conditioning are prolonged dry periods or overfeeding during dry periods.

Under-conditioning, or thinness, can frequently lower production and milkfat levels because of insufficient energy and protein reserves. Thin cows often do not show heat or conceive until they start to regain–or at least maintain–body weight. In feeding these animals, care must be taken to maintain production while increasing body reserves.

Body condition scoring is also useful in dairy heifer feeding management. Thin heifers may not grow rapidly enough to reach puberty by 13 to 15 months of age. They may also be too small to calve at 23 to 25 months or to carry enough weight to maintain a normal first lactation. On the other hand, fat heifers have been shown to produce less milk when they enter the milking herd, especially if they have been fat at puberty.

On a five-point scale, a score of 1 denotes a very thin cow, while 5 denotes an excessively fat cow. These are extreme scores and should be avoided. The average, 3, is the most desirable for the majority of the herd. A score with a plus or minus indicates a borderline body condition.

For accurate scoring, both visual and tactile appraisals are necessary. The following diagram illustrates the dairy cow’s major bone and muscle groups and shows the areas of concern in scoring. 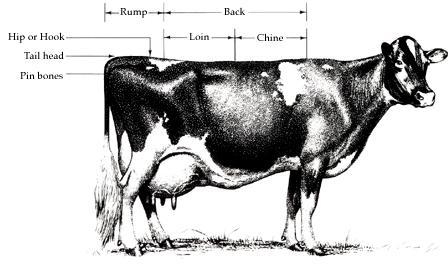 Cows were monitored closely through the dry period and into the following lactation. It was found that Group 3 cows, the fattest, had a longer interval to first ovulation, a higher number of days to first heat and conception, and the lowest first-service conception rates (Table 1). For the farmer, these factors mean lost dollars.

The study also showed that body condition affects dry matter intake (Table 2). Of the three groups, fat cows had the lowest dry matter intake. Although milk production appears unaffected by body condition, a lower dry matter intake can lead to ketosis, a displaced abomasum, or other consequences of nutritional stress. Such problems are more common in fat cows because they must use more body fat to meet their energy needs. Body fat mobilization, in turn, produces ketones and fatty acids, which can have damaging results. Ketones build up in the blood and, if not broken down rapidly, cause ketosis. Fatty acids in the blood aggravate the problem because they tend to reduce appetite.

Researchers in England studied the effect of body condition at calving on dairy cow health. The study involved two groups of cows, one in desirable condition and the other over-conditioned. As before, results showed a lower dry-matter intake among the fat group. Lower dry-matter intake is often the result of metabolic problems, and weight losses in fat cows following calving can set the stage for additional infections and noninfectious health problems. In fact, the fat group had more cases of disease than the desirable group (Table 3). An increase in metabolic problems–5 to 10 percent or more–is a signal to check body condition.

How to Score for Body Condition 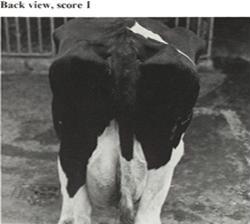 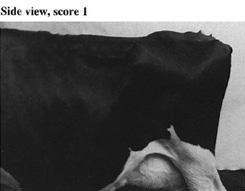 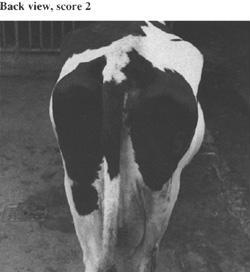 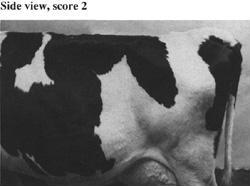 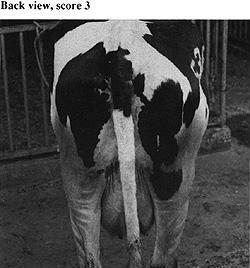 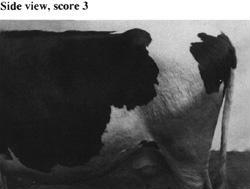 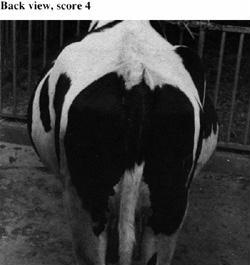 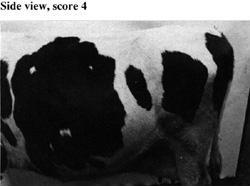 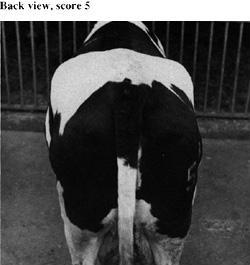 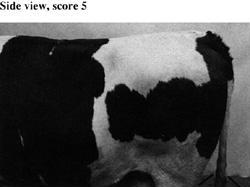 Target Scores for Stages of Lactation

When metabolic problems occur because animals are not in proper condition, the first thing to check is the feeding program. The following nutritional checklist may help diagnose certain problems.

Once the cause of the problem has been determined, the next step is to keep it from reoccurring. Avoid rapid fluctuations in body condition. Pay close attention to cows during lactation, especially the later part, and during the dry period.

When large amounts of forage are consumed or if grain is not fed properly, animals may become over-conditioned and are more susceptible to health problems. In dry-cow rations, these factors are more often overlooked.

To keep dry cows in proper condition, feed a daily hay-equivalent intake of 1.8-2.0 pounds per hundred pounds of body weight. This is the minimum intake of forage, and it should be maintained even in times of a forage shortage or high forage prices. Some long, dry hay should be incorporated into the diet, especially if silage or haylage is being fed. A complete ration of forages and grain for dry cows should be between 85 and 88 percent forage dry matter. If necessary, control feed intake to hold dry-matter intake to 2 percent of body weight.

The main objective during the dry period is to get the animal properly conditioned, starting in the previous three to four months of lactation. Once the cow is dry, her condition should be maintained through a balanced feeding program so that she freshens in good condition. Upon entering the milking herd, a cow can lose from 100 to 150 pounds during the first 60-80 days (1-2 pounds per day), but a weight loss of 3-4 pounds per day may lead to metabolic disorders. A cow should start replenishing her fat reserves 80-120 days after calving, at .75-1.0 pounds per day. (A few cows, about 5-10 percent, either never put on much flesh or usually tend to be obese.) Proper conditioning, then, can be accomplished by body condition scoring, paying close attention to the animals, and ensuring that their nutrient requirements are being met, but not exceeded.

This publication is available in alternative media on request.